I have a strong suggestion for an additional entry modus or file form: it is the possibility to create input masks (like it is possible, for example, in FileMaker). The point is 1.) that you can search all fields separately or - over the normal DevonThink search mode - all fields together and 2.) that you have a structured way of fill in data without the possibility to delete or change title fields in the entry mode. These title fields should - point 3 - not be part of global searches. The last point is for example a problem with templates. If I have a title field called “Author” and I search for “Author”, i.e. for data that is about the topic “author”, all of these data comes up as well. Sure, I can make my search entry differently and try to exclude these data but it would be much easier and cleaner if I don’t have to do that.

I attached two (not well designed) screenshots to give an idea of what I am talking about: You create an input mask with as many fields as you want. The title-fields of the mask stay always the same and are labeled as you have entered. The content fields contain the text you fill in during the years. When you fill in your data, this input field expands if needed automatically (as if it would be a MS Word table). When you fill in the data your cursor jumps - when you press the “tab” - to the next input field (not to a title field).

In my opinion, this option would make DevonThink THE database because it can contain unstructured data as well as structured data at the same time. It would be a clean and neat option for some data; my suggestion asks not for a different kind of database but for an extension of an already very well designed program.

Thank you for considering this idea. 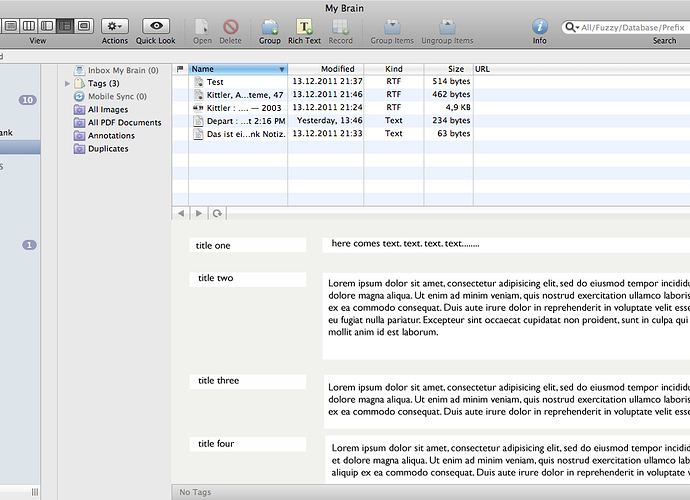 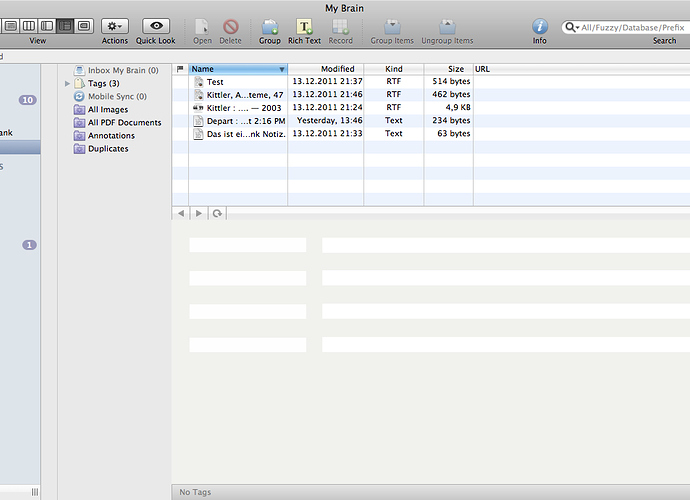 thanks you for the suggestion! Such form views are unfortunately not yet available but definitely scheduled for a future release.

DEVONthink was introduced in 2002, beginning with the 1.x version that was over time extended to DEVONthink Personal 1.x, DEVONthink Pro 1.x and DEVONthink Pro Office 1.x editions. There were many maintenance updates and feature evolutions in the 1.x series.

Version 2.x introduced significant changes to the database structure and features, and likewise has had numerous maintenance updates and feature enhancements.

Just as there have been two generations so far, 1.x and 2.x, it shouldn’t be a surprise that Christian and Eric have a vision and plans for a subsequent generation of DEVONthink. Although I haven’t discussed this specifically with Christian, I would expect that enhancements such as the addition of masks or fields to documents (but without changing their native filetypes) would fall into the “next generation” category. No, we don’t discuss release dates.

But even in version 1.x, it was possible to emulate, at least partially, much of the power of fields or masks in plain or rich text documents – especially in version 2.x, which permits searches for multiple phrase strings. (DEVONthink Sheets offer other possibilities, but I’ll focus on the moment on ordinary text documents.)

One can think of the text content of a plain or rich text document as a single “field”, whose size can range from null to many thousands of searchable words, and with associated metadata in DEVONthink such as Name, Size, Kind, Tag(s), Spotlignt Comments, etc.

Is it possible to use a text document as a vehicle for emulating a flat database that contains multiple fields? (I won’t get into issues of manipulating numerical values.)

Example: Suppose I wish to develop a catalog of a collection of beetles, and wish to include searchable information about a number of characteristics that differentiate the members of the collection. In a database such as FileMaker Pro I would create a number of fields, depending on the granularity of the characteristics I wish to include. Some fields would be text strings, such as Species Name, Habitat, Color, Sex, etc. Others might or might not be numerical values, such as measurable characteristics including weight, length, width, etc.

From such a FileMaker Pro database I could print a report about the members of the collection that meet my search criteria.

Or I could create a template text document in DEVONthink that contains headers or cue strings for each characteristic of members of the beetle collection. The template would on separate lines include “fields” such as Species Name, Habitat, Color, Sex, etc. and for each individual in the collection of beetles that information would be added, e.g., for the Color “field” the entry for an individual might be Color Blue.

In DEVONthink I can search my filled-out collection of documents (resulting from use of the “beetles template”) for blue beetles by doing a Content search for “Color Blue” (a phrase search including the quotation marks), and it would pull the same results for that criterion as would the FileMaker Pro database when searched for “Blue” (without quotation marks) as the color in the Color field. And if I’ve used the same descriptors in my FileMaker database and my text file “database” for Habitat, I could add the search criterion for Habitat in both cases, to find blue beetles that live in the specified habitat.

Granted, this kludge to emulate masks or fields in text files isn’t as powerful or flexible as a FileMaker Pro database (or the future DEVONthink), but just might be a useful trick in the user’s collection of tools. I’ve been using it for years.

Thank you for this suggestion. However, I was aware of that possibility. And I even tried it but it is simply not as handy as fields, not as quick and not as neat. (Using FileMaker instead is also no real solution because FileMaker lacks other possibilities.)

There are more problems like that. I really think it would be a good and useful idea to try to implement this possibility. A little bit like FileMaker but better

I agree that my kludge isn’t as powerful as the ability to add user-generated fields or masks to documents. Christian has indicated development plans to do that sort of thing in the future, and I’m looking forward to such features.