iOS Clip to Devonthink - directly to group, instead of just INBOX?

When on iOS, and using the share sheet pointing to devonthink, I can only clip to ‘database: Inbox’. Inbox is underlined, as if I should be able to click on it, but a tap does not result in anything.

I would like to directly file documents into groups that are created below the main Inbox, to save an extra step of organising later. How can I accomplish this? fyi, the database in question is connected to a NAS sync store.

Edit: Basically, the web clipper on mac (in Safari and Chrome etc) does exactly this. I can select in ‘location’ the group to store something in.

Should be clickable if you’ve got multiple databases. How many do you use?

I only have 1 webdav sync store added, i.e. there is 1 inbox under ‘Global’.

Btw, i just compared to my ipad. It’s the same behavior (inbox is not underlined though, but also can’t be clicked). I have no local database, just my webdav sync store added. The store is fully synced with the devices. (all software is latest, ios and dt). 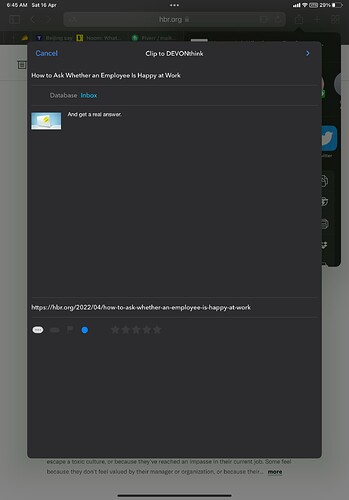 It’s not possible to choose a group when using our clipping or the Share command in iOS/iPadOS. This is an option under consideration but it’s not something simple to implement, especially from an interface point-of-view.

I’m curious how the UI would need to be that different from the existing Move popover. Instead of popping up a picker wheel, tapping the database name would push a table / collection view controller that lets you pick the location. Raindrop.io is a good example of an app that let’s you drill in to your hierarchy right from the share sheet.

Understood on the difference between the Op systems. I have moved over from Evernote to DT. It was essential for me that the share sheet in Evernote allows to directly pick the right collection, so this is the one thing that stands out for me as missing at the moment in DT.

At least your message clearly confirms that this is not a bug or user error, but in fact a limitation of functionality.

Would look forward to seeing this implemented in the future! Many thanks.

inbox is not underlined though

so this is the one thing that stands out for me as missing at the moment in DT.

What files do you want to add? Although it’s difficult to recreate the complete clipper functionality, you can add or create files in a specific group using the DT Shortcuts actions.

The advantage of Shortcuts is that it allows you to finetune what you require, without a software product becoming bloated with features that only some people actually use.

In Raindrop.io, it’s quite unlikely people have hundreds and thousands of folders to navigate. Navigating the level of hierarchies sometimes found in DEVONthink To Go would be much more cumbersome, necessitating adding a search function, which also could return redundantly named groups, which requires being able to easily identify the location of each group, etc., etc. -

In Raindrop.io , it’s quite unlikely people have hundreds and thousands of folders to navigate. Navigating the level of hierarchies sometimes found in DEVONthink To Go would be much more cumbersome, necessitating adding a search function, which also could return redundantly named groups, which requires being able to easily identify the location of each group, etc., etc. -

It doesn’t have to be that complicated -you can add additional functionality without the need for complex search tools. It would be worthwhile to take a look at how Keep It does this. It’s ‘Where’ button lists recents, then favorites, then the Global Inbox, then the complete folder hierarchy. As I typically am working on specific projects, I would expect the recents, favorites, and Global Inbox would fill 99% of my filing needs.

This is all definitely on our to-do list for when we rewrite the share extension so that it uses a direct database connection. Due to limitations of share extensions in iOS we designed it differently. But at least with the arrival of file provider and Shortcuts extensions it’s possible now to share database access also with extensions.