I am trying to create an iOS shortcut to capture text and use it to create an item in DTTG. But when I use the “Create Item” action in Apps->DEVONthink it fails with an error “Cannot Communicate With App.”

The error appears both when I try to specify a group for the new document: 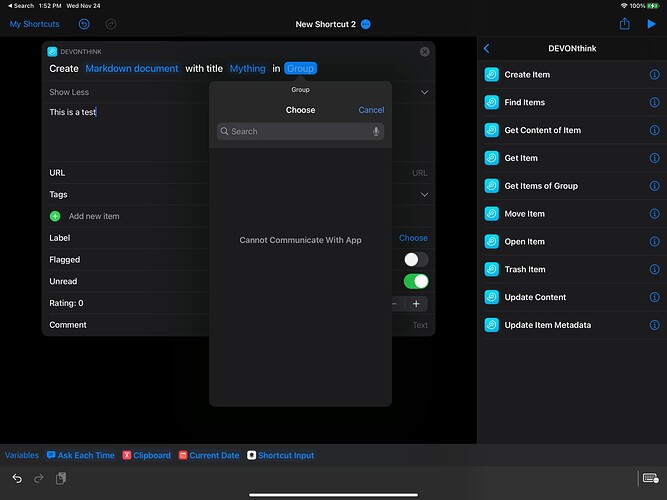 And when I try to run the shortcut anyway: 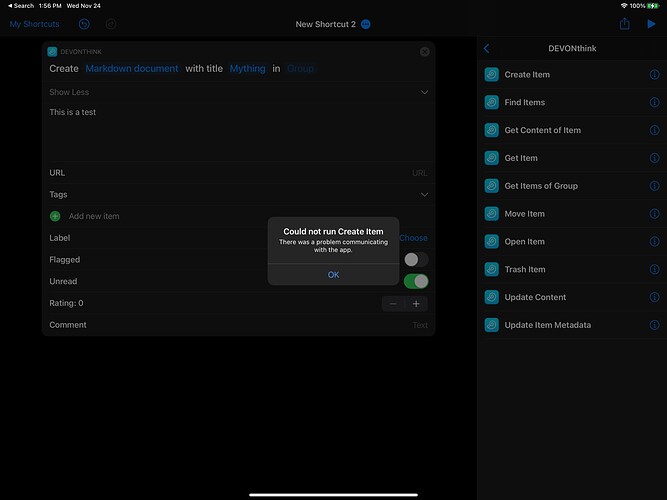 Yes, I have tried handing the Create Item a variable instead of just typing the text in directly 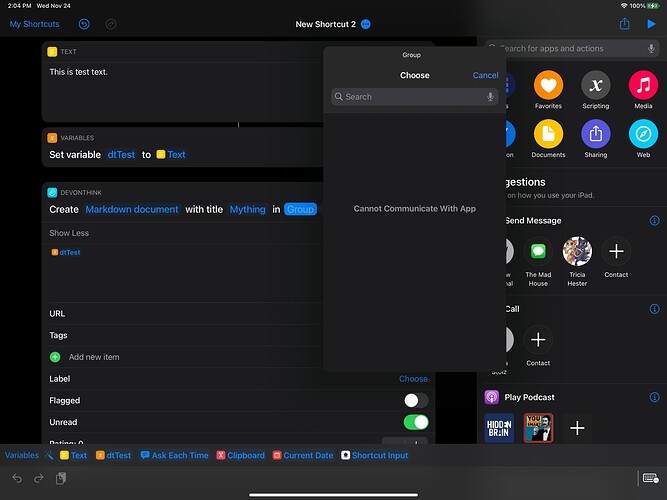 Yes, I have tried creating a file or markdown document instead of a text document.
Yes, I have closed both apps, rebooted the iPad, and reopened the apps.

I have not enabled authentication, imagining that it would just be another hurdle. Should I turn it on? I would prefer not to have to authenticate each time I use the shortcut, if I can avoid it.

Version 3.2.4. That is the most recent version listed in the App Store.

No, don’t enable it unless you need it.

Hmm… I can’t reproduce this here.
Is anyone else seeing this issue?

I suppose I could try updating to iPadOS 15, but that seems to cause more problems with apps like Shortcuts than it solves. What version of iOS are you running?

updating to iPadOS 15, but that seems to cause more problems with apps like Shortcuts than it solves

Definitely. Shortcuts on iOS 15 and Monterey is one of the crappiest things I’ve ever seen coming out of Apple’s software labs. A far cry from the marketing blurb associated with it.

Shortcuts on iOS 15 and Monterey is one of the crappiest things I’ve ever seen coming out of Apple’s software labs.

I bow to your richer experience. Or poorer, as may be the case here

Well, updating the OS didn’t help. Buying a new iPad did the trick, though. Good thing that was already in the cards!

I also have this issue from my iPhone . Has a solution been found? I will try to create the shortcut from another device but it’s not ideal.