Is import mail one time or recurring?

I’m new to using the import mail feature in DTP. I have a few questions.

This is probably me, but the concepts Import and Archive have confused me up until this day. There seems to be considerable overlap and redundancy in their functions, but I might misinterpret their intend.

Not that it bothers me very much in daily life, as I archive a mailbox and have Apple Mail run rules to push them into DT from then on.

Nevertheless might I give into consideration to combine them in some way or clearing up the difference between the two?

Have you checked out the Help > Documentation > In & Out > Archiving Email section?

Thank you! Just to clarify, attachments are imported WITH the mail message?

You’re welcome and yes, though not separately from the email.

Have you checked out the Help > Documentation > In & Out > Archiving Email section?

Yup, I’ve read through that multiple times and keep going back once in a while if a device fails or needs to be reinstalled.

It’s not that I don’t understand what’s explained, but both processes are not intuitively separate to me. Though as I said, that might very well be me.

I’ll give an example:

Import Email: While Import can be used on a mailbox, it is generally used on selected, individual emails.

Archive Mailbox: As the name implies, this command can only be used on selected mailboxes.

It doesn’t immediately make sense to me why Import would facilitate mailboxes (but apparently isn’t ‘generally’ intended as such) in particular if Archive already does that. To make matters worse, trying “Archive” as a user that is unsure about it’s effect, sets off a process that can run for a long time. That doesn’t improve it’s discoverability.

The question/remark has to do with the way people interact with DT. If it’s not intuitive enough (again, this is personal), you end up with the previously mentioned Norman door. It’s not that it doesn’t work or the proces is useless, but somehow it puzzles me much more than most other aspects of DT.

Importing emails imports to the Destination set in the Import sidebar or honors the setting in DEVONthink’s Preferences > Import > Destination when called from Mail or Outlook.

Archiving always adds to the Email group at the root of the database.

I am using Gmail via Apple Mail. For one of my mail accounts, DTP is not seeing/downloading all the content/messages in my various folders.

It is working on one account and not the other.

I also cannot find the Apple Mail Plug-in. Where is this plug-in available?

Do you have the Standard edition? The Apple Mail plug-in is only available in the Pro and Server editions.

Yes, I have the pro version 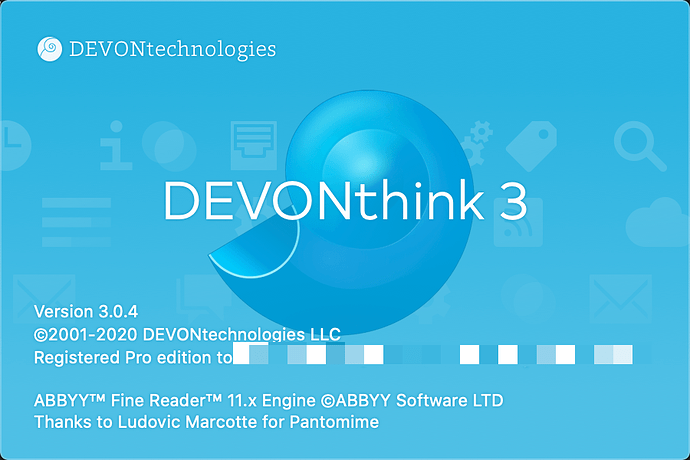 There are two menu commands added in Apple Mail:

**From the Help > Documentation > In & Out > Archiving Email… 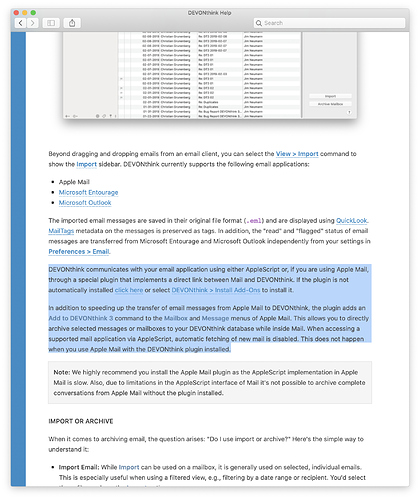