Mind Node was recently updated to v7, with a new file format.
Documents exported to DT in the new format do not display, only a splash screen with the app logo is visible. I assume this is due to the new format & thought I should bring it to your attention.

DEVONthink uses Quick Look for proprietary third-party file formats. Are you able to preview the files in the Finder?

Not properly, finder displays a small thumbnail of the document with a link to open in Mind Node. We will probably need to wait for Apple to catch up. I’ll raise it with Mind Node.

We will probably need to wait for Apple to catch up. I’ll raise it with Mind Node.

Actually it’s up to the developers of Mind Node to provide a working Quick Look plugin. However, sometimes a reboot is already sufficient to make Quick Look work (again).

I think there may be an issue with the plug-in. I did a reboot, but that made no difference. On checking MindNode documents even ones in the old format no longer display.

The MindNode 7 document preview works in Finder over here on 10.15.2.

It does not work in DEVONthink 3. Machine has been rebooted.

Thanks korm. I have also rebooted, quicklook still doesn’t work properly. I get a thumbnail where previously I saw a proper preview.
Please see attached screenshot. 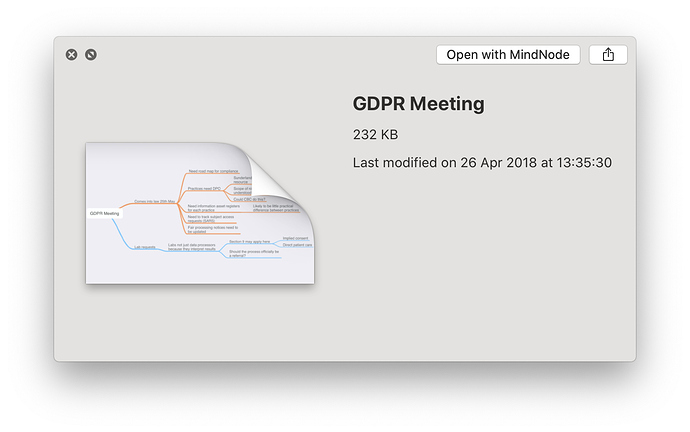 Just speculating here, but perhaps MN7 does not include a QL generator for pre-version 7 documents? Try saving this with MN7 and see if that changes things.

When I save it with MN7 things are worse. I just get a blank sheet with the app icon on it rather than the previous thumbnail.

Also speculating, but there are two instances of MindNode 7: the App Store version and the one included with SetApp. Should not have differences but might.

I also work with DEVONthink 3 and MindNode 7, but still on Mac OS 10.14.6 (Mojave). I have no problems with displaying MindNode files in DT. For me, Quick Look also works very well with the new file format of MindNode.

Mind Node has been updated & the issue is fixed.