I am trying to configure a custom shortcut for DT3B6 running on Mojave.

The menu item I am trying to create a shortcut for is Show in Finder. To do this, I have gone into System Preferences > Keyboard > Shortcuts as per screenshot: 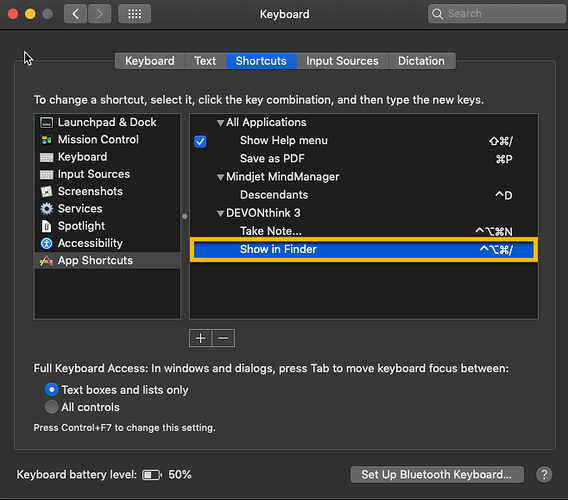 However, the keyboard shortcut is not showing up when I look at the menu item:

Any reason why this would not be working? I have already made another shortcut following the same method for Take note…, which works perfectly. Of course, if this is a Apple bug, then there is nothing that DevonTech can do.

There’s no bug at all.

Look very closely at the menu command and what you entered…

of course! How silly of me… thanks

No worries! As they say…

Hm. I’m not a native speaker, but I’m wondering why you capitalize the In (Show In Finder) but not the by (Send by Email). Same goes for from (New from Template) vs. With (Open With) and further down “To” vs. “to” (Move To…/Move to … again).
Are these capitalized according to English rules (I was supposed to learn them in school, but that is such a long time ago), according to Apple standards (human interface guidelines?) or maybe (god forbid) typos?

Found the Apple rules for “title-capitalization” in menu entries: Capitalize each word—except for articles, prepositions of four or fewer letters, and so on. See also capitalization.

That seems to indicate that the menus should read “Show in Finder”, “Send by Email”, “Open with”, “New from” and “Move to”. So maybe it is a “bug” after all, albeit just a minor one.

It’s not a bug, nor would I call them typos. It was how it was typed in, whether that was consistent or not. And since apps are developed by people, you will find little things like this in every application.

PS: Apple doesn’t even follow their own guidelines. They’re notorious for breaking their own rules.