When I’m lying in bed and trying to use DTTG, lying sideways, DTTG changes the orientation according to the iPhone position. However, it simply follows gravity and turns the display upside down, instead of going in landscape mode. This makes it impossible to use DTTG when being in this sideways position.

The only workaround is to manually (and globally) fix the screen orientation, but that is only a partial workaround and not a very good one, because then I don’t get any landscape mode at all, and I can’t make use of the broader landscape screen width for easy reading. Also, I later will have to remind myself to switch off the lock again, because otherwise I will later wonder in another app, why landscape doesn’t work anymore. In other words, it is no real workaround.

Thinking this further, I can’t think of any logical reason why DTTG should follow gravity to show its content in 4 different directions; rather it should behave like virtual all other iPhone apps and simply ignore the upside-down direction.

Note that this is different on the iPad, where it might make sense to use all 4 directions. (That’s why the iPad allows manually locking the screen to every direction; while the iPhone allows only locking the “normal” position. There is no real place for upside-down viewing on the iPhone.)

So actually, I think that the current behavior is a bug. Although I wonder how it survived over all the years and if there’s a rationale for it. I didn’t find related discussion either.

I am not seeing any issue with using DEVONthink To Go in landscape orientation on an iPhone. 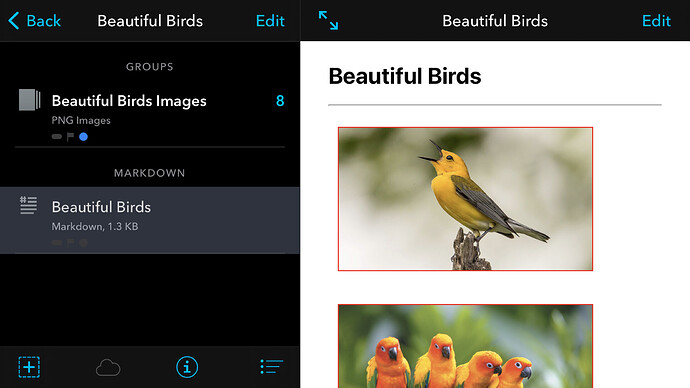 The fact that I hold the iPhone with its top downwards, when I am lying on my side…

If the top of the iPhone is facing the floor, the device isn’t in landscape orientation.

Yes, this is exactly what I am subscribing. However, it should stay(!) in landscape mode when turned into this upside-down position. Do you see my point now?

If it would do that, it would behave the same as (virtually) all other iPhone apps. And also, it’d be useful.

As it is now, it is impossible to read the iPhone’s display properly, when your own body (head) is not in upright position.

I see what you’re saying but no, sorry I don’t see the point. If I grabbed my iPhone upside down and DEVONthink To Go was in landscape orientation, I would definitely think something is wrong.

Development would have to assess this behavior.

Safari, Apple Mail, Apple Messages, Apple Maps, Apple Books, GoodReader, Bookshelf, Facebook, and a thousand other apps show the correct behavior. Do you think they are all behaving wrongly? I don’t — I think they do it for a very good reason.

Do you really think DTTG should do it different? And if yes, what is the rationale?

(Kindle does it wrong, too.)

I can’t speak on behalf of development but the current behavior allows using the application regardless of the device’s orientation.

…which is a bug in my view.

I looked it up in the Human Interface Guidelines and -as I expected- it’s in there:

Note that it is a bug to show upside-down portrait, because it doesn’t let me use my device how I hold it. I am holding my head sideways (when lying) and trying to read, remember?

The behavior is suggested not only by the guidelines, but also by iOS itself (Apple Developer Documentation)

Override this method to declare which orientations the view controller supports. The default value is all for the iPad idiom and allButUpsideDown for the iPhone idiom. The value you return must not be 0.

Note
All iPadOS devices support the portraitUpsideDown orientation. It’s best practice to enable it for the iPad idiom. iOS devices without a Home button, such as iPhone 12, don’t support this orientation. You should disable it entirely for the iPhone idiom.

Is that enough guidance?

By the way, I am on iPhone 8. You wouldn’t notice the bug on iPhone X, as we read above, as it strictly disables upside-down portrait at all, even if the app wants it.

Replying to myself, I just remembered why I didn’t hit the bug before: my last device (iPhone 6s) had a non-working gyroscope, so it didn’t notice it’s orientation itself. (I used to switch into landscape manually.) That’s why I wasn’t bothered in the last two years. But now I upgraded to shiny iPhone 8

Complicating the issue, there seem to be people that want to plug a fan into the lightning port and therefore want upside-down portrait mode… oh well… I now hope that the DEVONthink dev team isn’t in a very hot location…

Hmm, I just tried on both an iPhone 11 Pro and a Pro Max. Both correctly show the UI in landscape and portrait but when I turn the phone upside-down it stays in landscape as it should. What iPhone model do you use and which version of iOS?

Mine fully rotates on an iPhone 7+.

Mine stays in landscape with iPhone X, iOS 14.7.

As cited above, iPhones without home button will always prevent upside-down portrait mode.

iPhone 11 Pro as well as iPhone X both don’t have a home Button.

Mine is iPhone 8 though, which still has a home button so it allows upside-down portrait in principal.

OK, understood. We’ll have a look.

14.6 is current, and available for iPhone 8. That won’t be relevant to your original point, I don’t think. But there were a number of security issues addressed between 14.5.1 and 14.6.