I got hit by the Qlocker attack on QNAP last week and am still reconfiguring my setup days later. Having lost my sense of humour many times this week, I now find that DT is letting me down too. Until now I’ve been completely happy with it because it was solid when syncing with WebDav, however I really don’t want to expose anything to the web after this attack so I am attempting to set up sync using local sync store on my QNAP server. It doesn’t work. I add a test file to database1 on mac1, sync it, and it appears on database1 on mac2. Fine, but EVERY time I delete the file from mac2, sync it, then go back to mac1, sync it, the file remains on mac1. I have tried every bloody permutation of files, mac and sync you can imagine but newly added files NEVER delete. I assume this is a problem with local sync store as the hardware and databases are the same as I had via WebDav which worked like a dream for years. Any ideas please before I go completely mad?

All sync stores use actually the same logic. Is a verification of the sync store (see contextual menu in Preferences > Sync) successful? Are any issues logged to Window > Log?

Hi,
Thanks for replying. Both macs verify the DB successfully, although the desktop takes longer (8 secs) than the laptop (fraction of a second). No issues in the log window. DB is only 10.9Gb.

The grey dot is removed from the cloud symbol and next to the DB name after sync but the deleted file remains. After a further sync on both macs they remain the same, i.e. one contains the persistent file, the other doesn’t (i.e. it’s not being put back), but no grey dot on either.

Both macs verify the DB successfully, although the desktop takes longer (8 secs) than the laptop (fraction of a second).

Did you verify the database or, as suggested, the sync store?

Both, from both macs…

Could you please post screenshots of Preferences > Sync from both Macs? Thanks!

I’ll also set up local sync store on my Synology to see it it occurs there too. 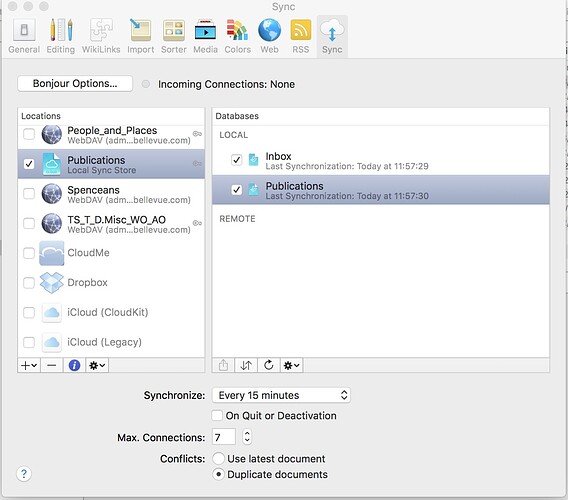 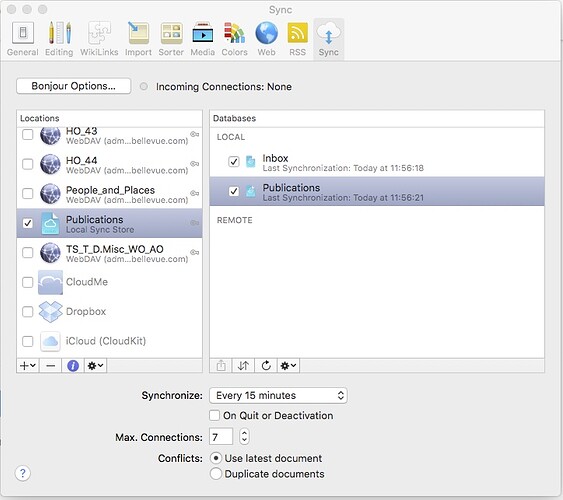 Yes… Prefs 2 set to duplicate documents, I’ve just seen it! Could that be it? about to try again…

This shouldn’t cause such issues but you could of course try it. What kind of files did you actually delete?

Ok thanks, I’m giving it a go just for interests sake.

Files were either new groups, or text files with random names etc. I did wonder about empty files so I included rubbish typed in the files and put a text file in the groups but it made no difference.

Ok, I deleted my previous QNAP store and created another empty store with a different name. Syncing to it from one mac populated it, then syncing to it from the other mac (without deleting the original data) all looked well. Fast on both macs now. Created files, deleted files in all kinds of combinations and it works perfectly so problem solved. Or is it? Why did this happen in the first place? Was it because I had opposing conflict settings when I created the original store?

Either way thanks for you interest and help. I’ll keep an eye on the other twelve I need to create to see if it happens again.

The other twelve what?

Just curious but why so many sync stores?

One for each DB. They are generally about 20GB each. I had to split them down. each one contains a series of historical documents defined by the national archives catalogue number

As long as you don’t need different settings or encryption keys for each sync store, a sync store can of course synchronise multiple databases.

yes DT is perfect for this, I’ve been using it for years. I use the same sync key and only had issues once which you helped me to sort and never returned. If it wasn’t for Qlocker I wouldn’t have needed to change anything but am now really cautious about exposing anything to the outside world. Hence goodbye WebDav, hello local sync stores. It is annoying as I can’t sync while in the archives any longer but I’m sure I can wait until I’m home again. it was only another level of security in case I lost my laptop while away from home.

And yes, local syncs on your network are definitely advocated unless you really need a remote sync option. See…

Syncing Mac-to-mac or Mac-to-mobile is done via our Sync plugin (see DEVONthink’s Preferences > Sync or DEVONthink To Go’s Settings > Sync: Locations). Sync is simple but you need to choose the type of sync method to use. We suggest using a remote sync option when it is needed, not merely because the option is available. For example, you may have an iMac at home and an iMac at work. It would be impractical to move one machine to be able to sync. Or you may have a colleague, assistant, or signi…

Yes thanks read it, all makes sense. One aspect not referred to though is security - you never think it will happen to you until it does; I thought I was securely bolted down but apparently QNAP left a backdoor password hard coded in their backup app which some clever chap used to make millions in ransomware. I can’t ensure my DT will be safe through WebDav but I am certain it is safe using local sync store (which also seems faster or is that just my wishful thinking?). Next thing for me is the raspberry pi running wireguard VPN, then I will go back to WebDav for security when I am adding data away from home.

I appreciate your help and interest. DT is my favourite programme, I can’t work without it. I hope anyone reading this and wondering whether to buy will be encouraged by the great support.