In DEVONthink 3.8 on macOS 10.14.6, I have the automatic wikilinks “square brackets” option turned on for documents. I’m trying to find a simple way to link to items within figure captions, so that when I put a figure in a document, there can be a link to the source in DEVONthink. The following tests demonstrate different syntaxes: 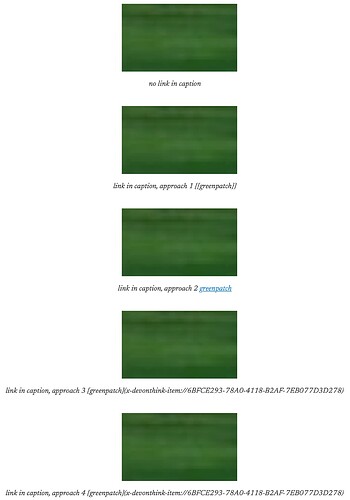 First, automatic wikilinking in the caption of the figure reference (approach 1) does not work. This behavior seem like a bug, unless it’s a known limitations?

Second, the rendered output in the case of approach 3 definiteIy looks like a bug. DEVONthink is obviously applying automatic square-bracket wikilinking, but then the final output is left in its markdown form and not in a formatted form.

Finally, are there other approaches I’ve missed?

Basically, I’m looking for the simplest syntax for putting links in the captions of images in markdown documents. Alternative #1 above comes closest because it is the shortest syntactically and also most readable (to me) in the editor. But it doesn’t work.

First, automatic wikilinking in the caption of the figure reference (approach 1) does not work. This behavior seem like a bug, unless it’s a known limitations?

It’s not a bug. Putting an automatic WikiLink in the caption is unsupported.

Do you actually need the link in the caption or could the image link to the original directly?

Do you actually need the link in the caption or could the image link to the original directly?

It would be nice to have a caption that says something like “Source: such-and-such”, but not essential for my current goals, and it would be enough if the image itself linked to the original (in DT) directly.

(An important factor is how easily I can copy-paste the image info, and how readable the result is in the editor window. Approach #1 in my examples above is most preferable from those standpoints.)

P.S. thanks for the reply – on a Sunday no less!

You’re welcome.
Here are the possibilities I see… 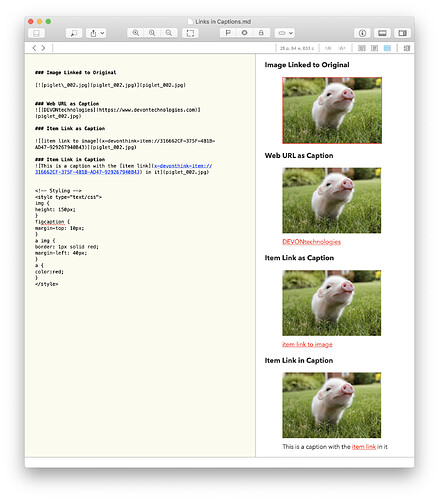 Thanks – those are useful to know about.

I think they won’t be ideal for my use case, because even the first one would still lead to pretty long text if I use DEVONthink item links. (In practice, my images are not in the current DT group. The example give in the OP was mainly to describe the link syntax but I now realize was somewhat misleading because it implied my image paths were quite short.) However, it’s useful to know about these approaches, and I might still use them in other ways.