Many papers unable to open : 'no file'

I have a folder with many many pdf papers/presentations etc. and I’m not able to open any of these. System says : ‘no file’. 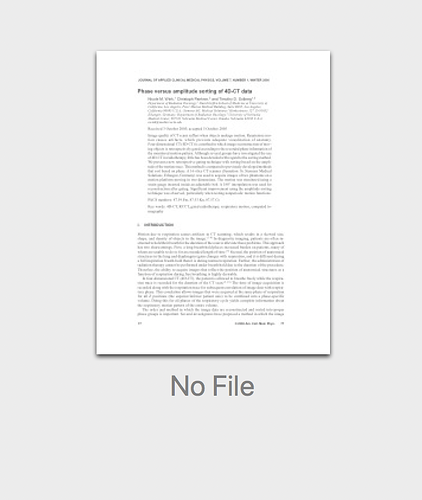 Any thoughts on where to start troubleshooting ?

A “No File” error should be only shown in case of items without a path. Which version of DEVONthink do you use?

the Database file is a “Database.dtBase2” does it make sense in the 3.5 version ?

Also some additional info, it is 77GB in size.

Version 3 uses an extended version of the databases of version 2, meaning that they’re still compatible. Were these files imported or indexed? Do they have a path according to the Info inspector/popover?

They dont seem to have a full path (?) file-name and extension to it ?

These files were imported in version 2.x. 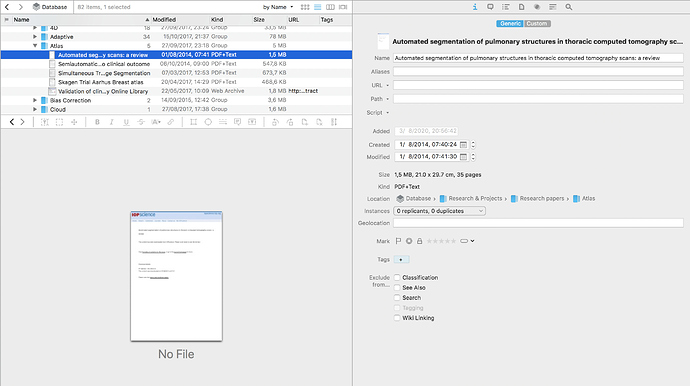 There’s actually no command or feature in DEVONthink that removes the path, this is only possible by using scripts. Do you remember when you used this database the last time (successfully)? Does a verification of the database (see File > Verify & Repair Database…) report any issues?

I dont remember exactly when this happend.

Verifying and repair database did not throw any errors or issues.

Verifying and repair database did not throw any errors or issues.

In this case the database seems to be consistent (no orphaned or missing files) although not the expected one. Did you modify these items lately or move them between databases? Or do you have an older backup of this database?

Yesterday I moved this folders from one data base to another but this issue was there before and I cannot recall exactly from when.

Yesterday I moved this folders from one data base to another but this issue was there before and I cannot recall exactly from when.

And is a verification of the source database successful too?

When everything was moved over (drag the folder from one DB to another DB), I deleted the original DB. Was this a non-prefered method ?

It’s usually no issue but in this case it’s impossible to tell now whether it was an issue of the original database or of something else.

Any other things I could trouble-shoot in order to get some more insights into this issue ?

Not without the original database present.

Have you tried restoring the database from your backups?

Restored just now. The Data that I restored from the Backup is fine.

I have 3 databases now.

All data from research should go into a Folder in ‘Database’. What would be the best way to achieve this ?

The easiest option would be to move the items e.g. via drag & drop to the desired destination group. But due to the former issue I would highly suggest to verify all databases via File > Verify & Repair Database… before and after moving the items.

A safer but slower approach would be to export the items via File > Export > Files & Folders… and then to import the desired items to the destination group.