Markdown files and editing them in DT3. Your workflow is...?

Right now the only thing that doesn’t work well for me (in terms of workflow) in DT3 is writing/editing markdown files. Even with some KM actions for bold/italics and snippets for templates, the basic approach of DT3 to md is slowing my work a bit.

On my work, I often use my mac screen split: e.g. the pdf on one side, the md to take notes on the other. For that, I prefer an external editor but my wikilink abilities when using it are limited (basically I end up doing the final edits within DT3).

I’ve been reading about different approaches to this, such as:

Hopefully your inputs will help me to find a better workflow.

usually I only create my markdown documents inside the DT database structure and then edit them with Byword as my editor of choice. (This is your method mentioned at no. 2)

Secondly I have an iCloud folder which is watched by DT (indexed) where Byword app on mobile / iOS is saving its content for creating and editing on the go.

This is also part of the “why I use Byword”. I can seamlessly edit on Mac and iOS in the same app. Add on to this I like the UI, clean and simple yet powerful.

For projects that involve a PC I sometimes switch to Typora as there is a Windows app or simply stick on VS Code for markdown editing too.

KM actions are rare in my workflows, mostly used for markdown headers (yaml style) and other text snippets used in mails etc. too, nothing special like signatures, text templates for repeated paragraphs a.s.o.

I have been using Typora as external editor, but I might go back to Byword (which in the last few days I’m finding easier to use). Also, I’m thinking about letting go of Ulysses since I’m not using it as much anymore and either import its files to DT3 or save them in a folder to index in DT3.

Thanks for the reply, @konterbande.

Some days ago I learned about the app „Tot“ https://tot.rocks/ which is a small note app, free for the Mac and some more bucks for iOS. It has (only) 7 „spaces“ (no better description atm) to write quickly down your thoughts or paste in copied text from anywhere.

Support for markdown and a share to DEVONthink makes this tiny gem the new go-to in starting my markdown workflow.

I have Tot but never thought about sharing it to DEVONthink until now. Having 7 dots have its Pros & Cons. Some days I really want more than 7!

Why note use the Take Note function of the Sorter? 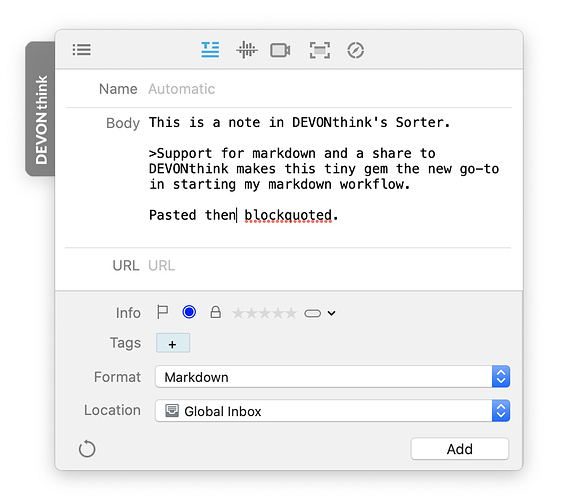 Take Note does not clip selected text, populate Take Notes with the text and a link to the source. If we are clipping + taking notes regarding the clipping at the same time, Take Note involves too many manual steps.

I use the Drafts share extension to clip excerpts and notes, and then a Drafts action template to structure the note’s layout the way I want and insert it into DEVONthink. My DEVONthink notes go into an indexed group so I can access them on iOS or other macOS apps. (E.g., Obsidian.)

Ahhh! You are so right! Didn’t thought about it. Mainly because I have an additional Mac in use that not has DT installed. But definitely forgot the built in feature. Thanks for reminding!

Have you shared your Drafts action? Curious to see how you’re doing it on the Mac especially!

I have an additional Mac in use that not has DT installed.

I think you should get that fixed up right away!

Courious, isn’t it? But it is a shared Mac. So we will see…

Is anyone using Obsidian for this? Would be interested to hear the details.