Markdown headers with colon are blank in Content > Table of Contents

I am having an issue that seems very similar to this one for DevonThink To Go but in DevonThink 3. Markdown, colon in header, TOC link

This is not an issue with the colon being interpreted as metadata on the first line. It deals with headings in the rest of the document. Headings that have colons show up as blank lines in the Contents > Table of Contents view in the sidebar. The weird thing is that you can click on these blank entries to go to the headings. It just seems that these specific headings are not rendering correctly in the Table of Contents view. See the screenshot below that uses the example document provided in the above thread. 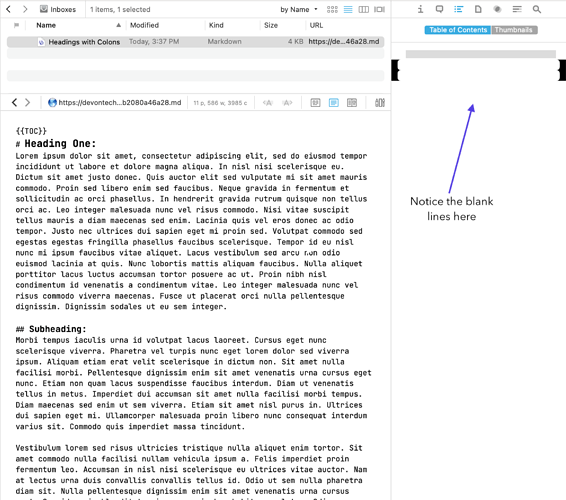 I have a bunch of documents that use dozens and even hundreds of markdown headings with colons in them, so it would be great if there is a fix for this.

Thanks for the feedback! This is a known issue which will be fixed by the next release.

Thanks for the quick response. Glad it is a known issue.