I have a Markdown file I created on the Mac on DT3 that has 10 pairs of item links, to both other MD files and to JPGs. On the Mac it looks perfect - all of the images display, and all of the links to other documents are properly shown. However, on the iPad, the first two pairs of links are rendered, but the remaining pairs of links are just showing as plain text. All of the items are in the same group and everything has been synced, so that’s not an issue.

Has anyone seen this behavior?

Can you posts some screen captures?

I’m curious why you’re using hardcoded <ol> and <li> elements in the Markdown. It’s not necessary since you can use…

The reason I ended up using the OL tag is that the numbers wouldn’t increment. Maybe due to the intervening links or breaks or whatever.

Here’s an example document following the essentials of your layout… 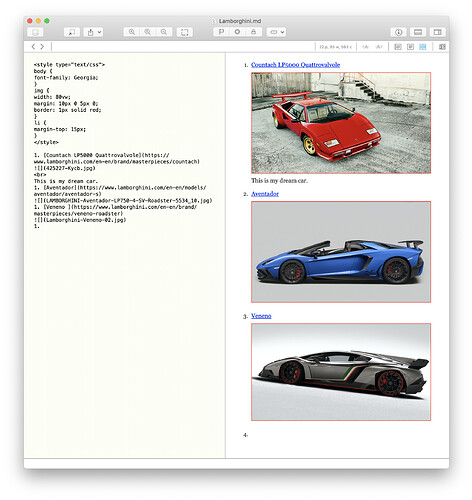 Notice how I’m just using 1 as the number in the source but the Markdown is properly incrementing the ordered list numbers.

Not sure what to say. I did it without the OL and it didn’t work. Happy to show you that as well, if that would be useful.

I got it to work - I took out spaces between lines, and that seemed to fix the problem. Thanks!