Metadata after OCR in DT3b3

Strange. We aren’t seeing any such issue here.

I will try tomorrow morning and report back!

I’m having same issue using ExactScanPro and an fi-7160. ExactScan names the file with the creation date which shows up in DT3b3 metadata dialog box. I then add additional text which doesn’t show up/ignored when I save and the file name becomes the first few words of OCR’d text. If I scan into DTP2, I can edit the metadata and it “sticks”.

I just rebooted and the problem persists, alas. 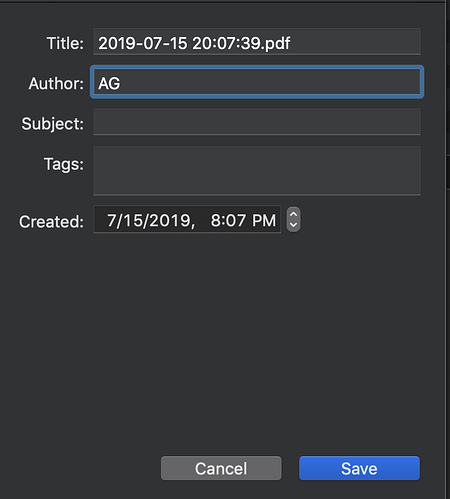 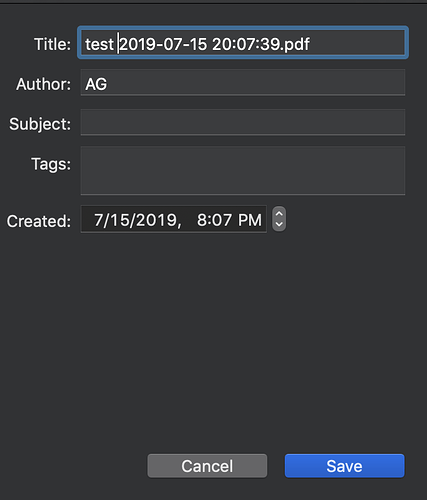 Also no change on my part after complete restart…

After further checking different avenues of importing documents in DT3b3 (eg. printing a PDF and importing directly) it has become clear to me that the issue is tied to the way ScanSnap Home treats the scanned document.
Will investigate further.

The only hint relevant to ScanSan I have found in the system log after a scan procedure that I have found indicates the following (and I am not sure whether there is pointer to DT…):

I’m not using ScanSnap at all. Using ExactScanPro.

I just updated to DT3b4 and the bug is still there: it replaces whatever title/name text I’ve entered with text grabbed from near the beginning of the scanned document. I’m using a ScanSnap iX500.

I don’t have a Scansnap but I just searched on line and note that SN’s organiser quick menu has a feature which can rename the pdf automatically. Might be worth looking at.

How to quickly rename your file after scanning - ScanSnap Community

ScanSnap for PC can be configured several ways to meet your specific needs and this tip will offer you some options related to renaming files on the fly. The most commonly known option is to use the Scan to Folder function either selected as a...

Same here, upgraded to DT3b4. I’m using ExactScanPro and not using ScanSnap software, and problem persists. I save a copy of the scan outside of DT3 and it keeps the name ExactScanPro gives it.

@mog: This feature is also available in the ScanSnap software for macOS, and I’ve been using it successfully in DT2–and up through DT3b2–to rename my files immediately after scanning. The problem is that DT3b3+ is overriding that naming downstream of the import process and OCR, using the first few words in the OCR’d document to replace whatever Title/Name had originally been entered in ScanSnap dialog.

I have the same problem, but described it less well.

I was able to correct this problem by uninstalling DT3 (now at DT3b5)–using the instructions on page 6 of the DT3 user manual–then creating a new user account (for testing) and reinstalling DT3b5 in the new account. Following that, the new filenames were once again preserved throughout the import and OCR conversion process.

Perhaps there may have been some adverse interaction caused by installing DT3 alongside DTPO (v2.11.3) in the same account. However I’ve no idea why it would begin manifesting after updating DT3 to beta3.

There was a smart rule downloading automatically that was causing the behavior. That was disabled in public beta 5.

But I’m glad to see you’re running DEVONthink 3 on a test account.

I’m on beta 6 and am still having this problem. Is there a smart rule that I should try to disable to prevent this from happening?

I deleted all smart rules, after which everything worked perfectly…

Control-click the Incoming Scans smart rule and either Remove it or Edit it and set the event trigger to On demand.