Microsoft Edge is now available on the Mac. Will there be a DTP browser extension for it?

This depends on its upcoming popularity.

Microsoft Edge is now available on the Mac.

LOL I rather like it. But I need my clipping tool.

To be fair, this is the Chromium version, of course, not the original Windows UWP version. It could be a VERY valid competitor to Chrome, particularly if you would rather NOT give Google access to all your data. Right now I use Safari and Firefox (for when Safari doesn’t work), but I still have a few websites that require Chrome. I will happily switch to Edge when they launch their Chromium version officially on the Mac if it means keeping Google out of my life.

Knowing how much Chromium chews battery time in MacOSX I prefer Safari.

Of course, but I can’t always use Safari for stupid webapps.

I have the beta since some weeks but I’m not using it because it go to 100% of CPU with only in background, but should accept chrome extensions without any problem. You only need to enable extensions from other stores and then install DT one (I haven’t done it as I’m not using it until they resolve the 100% CPU usage… that was promised but got 3 updates without having resolved it). 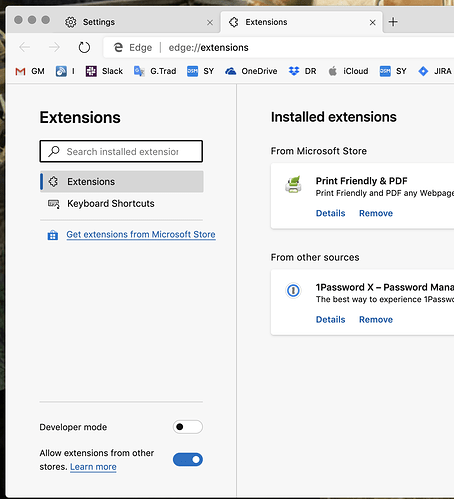