I added a file in DT3 on my Mac (main.s). It is an assembler code snipped, it get’s shown with monospaced font like I expected.

I now looked at the file in DevonThink To Go on my iPad. Die file is synced, but it’s missing the file extension .s and so displayed without the monospaced font, which is kinda uncool for a code snipped.

I would expect that DevonThink To Go displays the file the same way DT3 does? And mostly the sync to the iPad doesn’t change filenames/extensions?

Is this an indexed file? A screenshot of the Info inspector would be useful.

I would expect that DevonThink To Go displays the file the same way DT3 does? A

macOS ≠ iOS so this shouldn’t necessarily be expected. The underlying technologies and frameworks can and often do differ.

Thanks for your reply! I’m not sure what you with “indexed file”, if the file syncs isn’t implied that it’s indexed? I created the screenshots of the respective info panels: 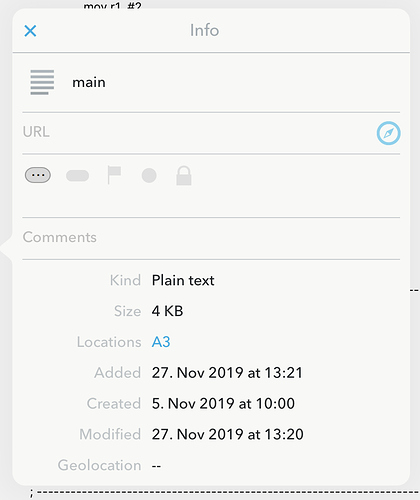 Additionally I now have tried to share the main.s via AirDrop from the Mac to the iPad and add it to Devonthink. In this case the file get’s added, but on iOS the file can’t be displayed (“Unkown - This document cannot be displayed”), but get’s synced back to the Mac where it can be viewed as main.s (with a monospaced font

So I think the problem is on iPad you somehow disabled the rendering of .s-files but and convert synced .s-files to plain text files?

@BLUEFROG while I agree, I don’t think this should apply to plaintext files.