I hinted at a problem here in someone else’s thread but the way in which that thread developed did not (understandably) address my problem. I am running DT3 beta 7 under macOS 10.14.6.

I have an encrypted database called JL with three folders called Photos, Video and Audio. When the database is open and a relevant file arrives on my MacBook Pro (running macOS 10.14.6) I drag it to the DT3 inbox to be the subject of the following smart rule: 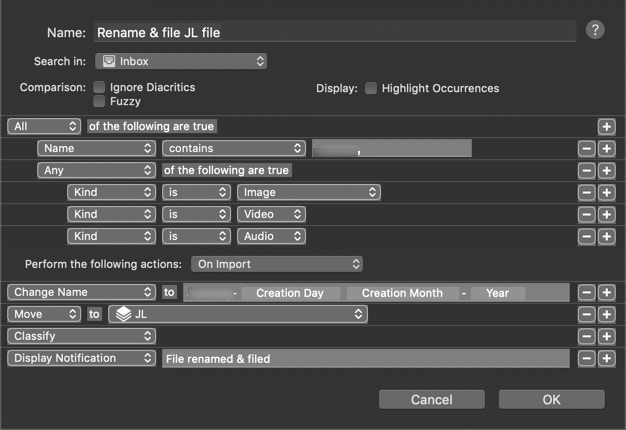 That rule works perfectly with jpeg files—which are moved to the database and transferred to the Photos folder.

Am I expecting too much or simply doing something incorrectly?

Smart rules (or scripts) don’t trigger other smart rules, otherwise the results could be easily unpredictable. In the worst case the rules would be trapped in an endless cycle.

Thank you for the quick response. I appreciate what you say. However, why will Classify never classify the video and audio files? Surely there has to be some way to do what I need to do (without getting involved with scripting)?

However, why will Classify never classify the video and audio files?