One of the features available in an outline-oriented application like OmniOutliner is the ability to move outline elements around using keyboard shortcuts. You can write documents in simple outline structure, such as this:

and move elements around without taking your hands off the keyboard by using OmniOutliner’s keyboard shortcuts, 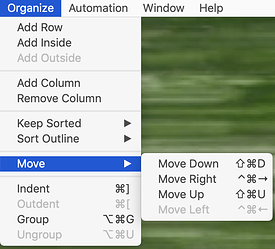 making it so easy to rearrange the structure:

In a truly blinding flash of the obvious, it only lately occurred to me that I could approximate the outline style using DEVONthink groups and the list view,

and the real reason I haven’t been doing it is because there are no built-in keyboard shortcuts for moving items around in a group list view. Now, I can imagine why that’s the case currently: such movement commands would only work in the unsorted view in group lists. But I think it would have utility even if it were only available in the unsorted sort mode.

In the meantime, it also seems like it should be possible to create shortcuts to move list items around using a combination of AppleScript and Keyboard Maestro. The functions we would need are:

Has anyone doing this, or have pointers to code that might be useful as starting points?

Moving a file in the item list would require the Sort method to be Unsorted, so it wouldn’t be as simple as moving paragraphs in text.

In a truly blinding flash of the obvious, it only lately occurred to me that I could approximate the outline style using DEVONthink groups and the list view

As to the first part of mhucka’s question, I had exactly the same blinding flash of the obvious as well and have been doing this using atomised markdown notes in the same kind of structure.

As to the second part, I am stuck fiddling with the order in unsorted view and then renaming by number once I’m happy with the order and can’t conceptualise at the moment how you would achieve a frictionless way of promoting and demoting notes within the structure.

There was a thread last week that I peripherally paid attention to where the OP was using manual sort (something is didn’t know you could do) and they got some help from the forum Script-o-Wizards on programmatically numbering based on the order, maybe using custom metadata.
I think it all worked out in the end.

Right, it would only work in unsorted mode. Regarding the screen capture, I’m not sure what we’re seeing – do you have some kind of keyboard shortcuts to do that already?

using atomised markdown notes in the same kind of structure

Thank you for bringing that up – it was on my mind but I didn’t write it. This approach definitely seems to work best with short notes, as you say. I’m currently also experimenting with using DEVONthink’s “widescreen” view (⌘7), so that the outline and notes are side-by-side.

Thankyou for sharing your screen view - nice to someone else from a different discipline has arrived at a similar strategy. My approach looks pretty much identical to yours:

I’m actually in bed, on my phone, after midnight here. PM me a reminder for tomorrow.