I can’t locate a discussion about this setup (but, if there is one, please point me to it).

Looking for advice on how to set up multiple devices into one database.

I am transitioning into a workflow that will use 2 static stations (both with a DT license) and a DTTG license on an iPad.

My question is: what should be the sync set up?

Primary database is indexed on an iCloud location that both statics can see and are connected to (1 Apple ID for both). This seems to work like a charm.

Currently, the original static station only is synced via CloudKit to the iPad.

Should this configuration stay this way?

Or, should I sync both static stations to CloudKit? This seems wrong to me, but I could see where relying on one static to icloud sync could be an issue if that system loses connection in some way.

OR will having 2 systems pumping the “same” indexed database into CloudKit just corrupt the heck out of the CloudKit based sync.

Any suggestions or advice is appreciated.

Or, should I sync both static stations to CloudKit?

I’m now seeing 2 separate databases in the DTTG sync. The databases appear to be identical, but they are clearly separate. Can these be combined or somehow turned into one database?

Am I missing something?

The databases appear to be identical, but they are clearly separate. Can these be combined or somehow turned into one database?

Is it possible that only the name is identical, e.g. that you created databases with the same name on different devices?

Below is drawing that hoefully explains my current sync setup. And, yes, DTTG displays 2 seperate databases based on the single iCloud instance. I am sure I have something poorly configured. Should I remove one leg of the CloudKit sync? 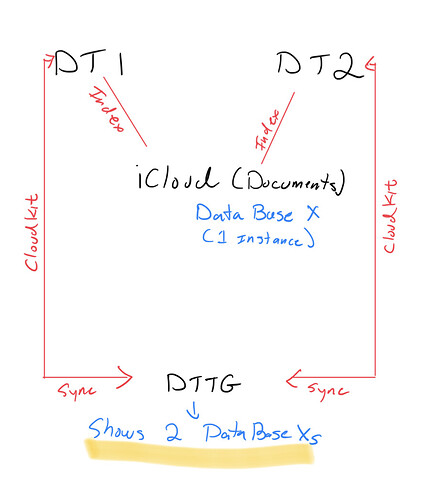 PS: This is all covered in the Help > Documentation > In & Out > Sync section.

PPS: Perhaps this update to my Sync Types Explained post is helpful…

This little clip is old but the concept still holds true. I’ll look into doing an update at some point

I understand the explanation. However, is a single set of files (iCloud) set up in as indexed database on two seperate Macs (Mac 1 and Mac 2) the proper configuration? The acutal indexed files are identical.

When I try what one slide in your Sync Types video suggests - using the Preferences Sync option on one of the Macs (say Mac #2), I get nothing but a database instance without content. Nothing ever populates.

Is this due to the fact the database on Mac 1 is an index and not imported? I can see the dtBase2 file on Mac 2 is significanrtly smaller than the Mac 1 dtBase2 file, but as none of the files are imported (only indexed) I don’t think that should matter too much.

Regardless, what I had confgured initially - syncing only 1 of the Macs to DTTG via CloudKit seemed to work fine. Yet, cgrunenberg suggested that I needed to configure DTTG to sync to both Macs. Thus, my questions and drawing here.

Did you import the database on the second Mac?

If you mean via the Sync dialog, yes. 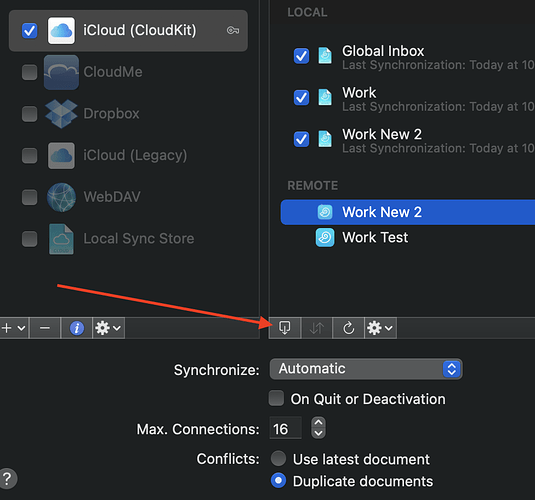 And I get “mostly” nothing.

“Mostly” is becuase the only items that appear in the “imported” database are certain PDFs in the “All PDF Documents” smart group. These items total 208. The actual database I am trying to sync has 537 PDF files. However, that database does have 208 PDF files that carry tags AND these tagged files do appear to be the items that are populating the “All PDF Documents” smart group.

As can be seen here, no actual Groups appear in the tree of the “imported database.” Just the 3 default Smart Group. And, Yes, I have verified the database I am trying to import.

As per above, there was some sort of corruption in the sync store.

So, I just blew it all up. Deleted literally everything. All the Database instances, sync stores, the whole enchilada. Rebooted each device etc.

I then created a new indexed database using the same content (content in an iCloud location) (Mac 1). Then I set up the sync paths, one at a time, waiting until one was fully synced before moving on:

So far so good. All seem to be pumping away.

I am a little concerned that - at least for the iPad - this is the same set up as I had before and it never seemed to sync properly. Indeed, you and I have had a previous discussion on a corrupted database on this same iPad.

Thank you for your assiatance. It is appreciated.

You’re welcome and sometimes going back to square one is a good idea, if only psychologically.
Cheers!