Nearly my entire database of over 2000 documents is now "orphaned"

So you’re storing the contents of the Documents and Desktop in iCloud and indexing the folders into DEVONthink?

Do you see a cloud icon next to the files in the FInder, like this?

Yes, I have Desktop and Documents referenced in DT and also sync them via iCloud.

As for the files being in the cloud: Some of them yes, others no. Should DT be able to search and archive the files that aren’t downloaded to the deice? Either way, I don’t remember the folders that weren’t on device appearing greyed out, empty, and with the Finder icon next to them when I first set them up.

Are all files/folders of iCloud Drive including the ones of the Desktop & Documents folder available locally?

Unfortunately, I have had DEVONthink running on my Mac, awake, all weekend, and iCloud has not finished downloading the database. I will see a download status in the lower left with a status bar, then it will disappear, leaving me to think that it is done.

Then, at random, it will re-appear, sometimes showing less or more files have been previously downloaded than it did the last time. I have no idea if it is running the entire time or not. It just shows up every now and then.

I have attached a screenshot of my Personal database. Many folders are still greyed out. I assume the ones with Finder icons were from my indexed Desktop and Documents folders? I am not sure why they lost the top level Desktop and Documents folders and are just freely floating amongst my other database files. I am also missing the Evernote subheading from my large Evernote migration. All of my notebooks from that transition are freely floating amongst the database and contain very few of the actual files. Its clear that something is working but I don’t know why the job is paused or taking so long.

I remember it taking days, if not weeks, to sync to my iOS devices over iCloud when I first set this up.

Both of my iOS devices reflect the correct organization still. 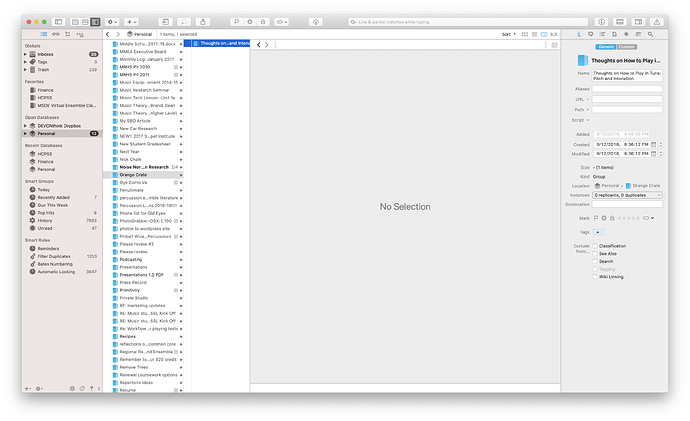 I assume the ones with Finder icons were from my indexed Desktop and Documents folders?

Yes, items with such an items are indexed ones. You can check the path in the Info inspector.

You could either try to search for all pending items that still have to be downloaded via a toolbar search for item:pending and then try to download them via File > Download Pending Items.

Download Pending Files is greyed out. Does this mean DT thinks it is done? My iOS devices don’t have everything downloaded. My database is too big.

I still see that iCloud download status bar pop up every now and then. It reflects about 25 percent completion every time it appears though it varies.

Did you search for the pending items as suggested and select the search results?

Yes. is this correct? 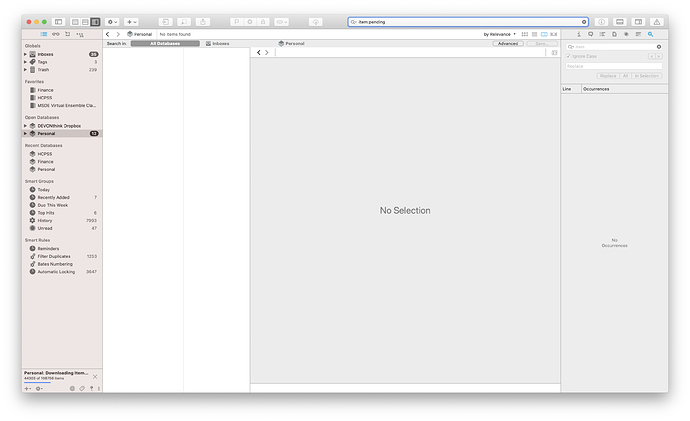 That’s correct but your database doesn’t seem to contain any pending items, meaning that at least the current state of the database seems to be complete and that the grey folders are just empty.

Does a manual attempt to synchronize the database again (see File > Synchronize Database) add any new data or log any issues to Windows > Log?

Not now, but I have been getting these errors. I have also previously seen errors where it appears to be having trouble linking to my indexed Documents and Desktop files.

Do you use a Dropbox sync store too?

As an experiment, I have a small Dropbox database that I started when this issue began so that I could keep storing reference documents in the app. So far, I am having more success with the Dropbox sync, but the Evernote/Mail/Safari uploads from my Personal database had made it very huge.

These messages were caused by Dropbox and are harmless. BTW:

Ok got it… so here is where I am… I am very saddened that I can’t get this sync to work.

My Database isn’t that big if you take out all of the apps I was archiving to it: Email, Safari, Evernote, Pinboard, Document archives (do these even take up much space?) …

If there is any way I can focus my download on certain files… or even get the DEVONthink original content from an iOS device or my archive, then I feel confident that I can start over in a new Dropbox database and add back the Evernote/other archives later.

What is the best way to go about this? It wouldn’t be hard to drag them from DT to the Finder in split window mode on iOS except documents even as small as 200 kb take sometimes up to a minute or two to download to iOS from the cloud.

What do you think?

The only alternatives coming to my mind is to either import a complete copy of the database from your iPhone/iPad (but this would require a complete database including all files on such a device) or to restore the last backup.

As already mentioned the size of database packages in the Finder are not really comparable and might vary depending on the number of internal backups and when the database was optimized the last time.

You could search the current database (the one that was hopefully archived as suggested) for items added or modified since the last backup and export them via File > Export > Files & Folders… Afterwards restore the backup and import the exported files/folders.

The archive I have on my computer is from the same database, only with all of the files re orphaned. So the files are local to the computer… but disorganized all over the place. Is there any way to construct a complete or meaningful picture between the two?

I was referring to this backup:

The archive of the database containing the orphaned files would be only necessary to export the latest files.

You can use Cirrus (here), to check iCloud status.

Bus as a summary, iCloud Drive is even crappier than OneDrive, and OneDrive is crappy.

I am starting out by looking through my iPad database. The file size stored in iCloud obviously represents the data I have in the database. The metatada like thumbnails and file titles, etc. is all correct. But when I tap on a file that isn’t downloaded to the device, the word Download is often greyed out.

What does this mean? Is there a way to troubleshoot it?

Edit: Unrelated and new problem. Been slowly adding what I can to my new Dropbox database. Its going well and syncing much faster and reliably between iOS devices and the Mac. Out of nowhere, DEVONthink crashed on the Mac. Now when I try to open it, no windows appear and I immediately get Not Responding.

Regarding the crash, hold the Option key in DEVONthink and choose Help > Report Bug to start a support ticket.