Need some help to prevent a sync disaster

I recently purchased a new MacBook Pro and installed DevonThink 3. Not sure what went wrong but the databases were downloaded but not syncing. I think I installed it first and bought the additional seat afterward, I was traveling and only had a few moments here and there to install key software. I am using Dropbox sync and have never had an issue before with my old MacBook Air. It appeared that it copied in the databases but in particular the inbox was not updating - I didn’t check the others in detail. Also, my main database did not appear in the list as a remote database.

As I was poking around I clicked on the Dropbox datastore file. My datastore is called Larea2018. Now in Sync Preferences I have a choice of two different datastores with different icons. One has a dropbox icon and reveal in finder is grayed out. The databases there say they just synchronized. The other has a cloud icon and reveal in finder shows the dropbox file. The databases under this datastore say never synchronized.

This laptop does not have any data other than what it has downloaded because this is going to be my first trip with it other than installing a few things. Not sure what went wrong but what I really want to do is just download the databases from Dropbox that are syncing with my desktop and start over on this laptop.

Any guidance would be appreciated. Do I need to uninstall and reinstall and delete all the databases on the laptop, or is there a procedure to replace the local databases with the remote ones? 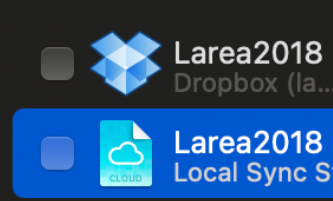 As noted under the name, you have created a local sync store with the same name, quote possibly from double-clicking a .dtCloud folder in your local Dropbox directory.

Why have you disabled the Dropbox sync location?

I disabled it because it wasn’t syncing - the universal inbox will not sync and my main database is not showing up in the remote list for some reason even though it should be synced. The inbox on the new laptop also had 3x the number of items as the main inbox on my desktop after I had caught up some filing on the desktop and I was concerned about creating duplicates. After more checking it appears my main database has “1 inconsistency” and when I try to repair it I get “repair failed.” I also notice that when I close the other databases they show up as “Remote” and the main database does not. It was syncing as of earlier today per the preferences window. Would you recommend I load a backup?

PS going out of town tomorrow for 3 weeks. Also, I promise I will not hold you responsible if I screw up your advice.

In DEVONthink, hold the Option key, and choose Help > Report Bug. Thanks!

Thanks Jim. Just to close the loop, I created a new database and moved all my data into it. It still would not validate until I located and permanently deleted a file that was showing up as an error in the logs. I also copied the universal inbox on original computer to a temporary place and then cleaned the inbox on computer 2 where it wouldn’t sync. Once I got that done everything started syncing properly. It almost seemed something was stuck on upload and nothing would work til I cleared it out. Looking at the logs the error on that database had been there for a couple of weeks but I hadn’t noticed it. I am sort of wondering if something flaky happened during the big storm we had in Houston where our electricity was going up and down for a few days. Anyway, think I’m good to go.