I’ve created a long, +300 item list of starred articles in NetNewsWire. It’s become unwieldy and I was wondering if there’s a quick way to turn each of those articles into a bookmark in DEVONThink?
Once they’re in DT I can leisurely tag and group them as I see fit.
I am asking a similar question over in the NNW slack channel to see what kind of file I can get out of NNW.
Thanks.

NetNewsWire has OPML export but I don’t know whether articles are included (and can’t test because NNW requires macOS 10.15).

Here is a simple AppleScript which will add selected article in NetNewsWire to DEVONthink with tag to read"" and a group of your choice.

My AppleScript skills is not robust, so perhaps someone can step in and expand functionality to repeat with each item in starred list in NetNewsWire.

Is this supposed to be a one-time event?

Is this supposed to be a one-time event?

Hopefully, no. When I used Feedly for RSS reading, there was a tagging functionality that I used to categorize and organize saved articles. Now with NNW, which is better than Feedly in every other way, my work flow is to save articles prodigiously and then go back and review and un-star the ones I had read or lost interest in. That workflow is fast and instinctive. The result though is that slowly I have accrued a ton of articles that I want to bookmark for reference and later research uses and NNW isn’t the place to store them. Sooooooo, ideally I would get these bookmarks out of NNW and into DEVONthink and try to stop the accumulation in NNW and maybe in three years I would do it again?(no promises)
If I could get this to work it would be another aspect of DEVONthink and NNW that fits into the “any device, any time” work model that suits my current situation and needs.
EDIT:Punctuation and quote

Did you try what I suggested?

I just downloaded the app and tested this out.
NetNewsWire has a very limited dictionary as well as very limited sharing and inter-application communication options.

You can only export per account, not groups or essentially smart groups. 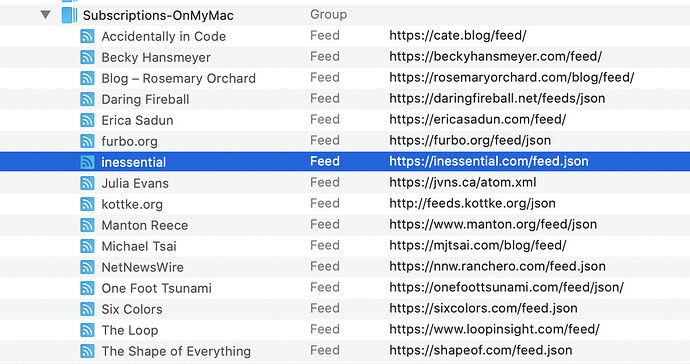 Did you try what I suggested?

By experimenting I have discovered that the OPML from NNW only includes the subscriptions and not the starred articles. Doing some reading in NNW-land leads me to believe this is true as well due to people changing syncstore locations in recent versions and discovering that the starred files aren’t part of the OPML export when they move from say, Feedly to iCloud sync store locations.
I have, however, discovered that the contextual menu of an individual starred article has a share entry that includes “add to DEVONthink 3”. That option is not available on a selection of multiple articles though.
Next I try the AppleScript…and thanks everyone for your assistance.
DT is a real brain anti-chaos agent for me and this is another step to reduce the clutter in my brainpan.

I’m curious why you’re not just using the feeds in DEVONthink?
You can add a star rating to individual articles and even set up a smart group in the database to show any starred items, like so…

I’m curious why you’re not just using the feeds in DEVONthink?

It’s a good question
When I moved my note taking from Evernote to DevonTHINK, or soon after, I gave the DEVONthink feed reader a quick test. At that time it wasn’t as useful as what I was using which I think was Google Reader or Feedly. The requirements are ease of use, speed, an interface that lets me see as much of the article as possible, and easy navigation through my morass of feeds . NetNewsWire is an open source refresh of the first RRS reader I ever used and it works simply on all my devices and sync is fast. Reading news via RSS is the way I get the majority of information and news in my day to day so how I interact with RSS is very important to me.
The shorter answer is I am using NetNewsWire more out of habit, evolution, and support for the business and software model than a rigorous comparison of all all RSS readers ( I have tried a bunch though) but I am willing to give the DT RSS functions a run through to see if it could fit into my daily workflow. I’ll give it a test over the next few days and report back.

I don’t see my use of NetNewsWire as a pain in any way.
It is a great RSS reader and I like how it works.
For the last few months as I’ve been working on the very early stages of research for a personal project. I have been grabbing articles from NNW when they ring all the right bells, I open them in Safari and read them through. If they pass that test I send the link to DevonTHINK, sometimes tagging it at the time and sometimes leaving it to be tagged later.
I know this uses three piece of software for one purpose but by doing so it allows me to keep a tab open of the articles I’ve read that day in Safari available for a re-read or as a reminder to look something else up. Back in DevonTHINK I have the saved bookmarks which I can later categorize with more specificity so that I can find it later.
By beginning to work this way I’ve discovered that DT would be a better place to keep my bookmarks for the long term and that means I have to look at the +300 bookmarks I accumulated in NNW from before I started saving things in DT.
In many ways this is a testament to how good DevonTHINK is as an auxiliary mind. I can and have used it to dump notes in to and also to keep track of all the documents of a small co-operative corporation I am a member of and that’s really great (they were all in Paperless but DT is way better). But then I have read about how people are using it to organize novel and book writing projects and then I got an idea for that and tried that out. I’ve also fooled around with markdown and specifically the Fountain script writing variant and tried that in DevonTHINK.
Now this research project comes along and I can add a bunch of RSS feeds to NNW and slowly begin to acquire some direction and it becomes obvious to me that saving the articles into DT along with the first writing stems is the way to go.
In all those steps at some point I had to decide whether to go back and transfer all the scripts, for example, that had been created before I figured out the DT as central storage. That’s where I find myself now with the RSS feeds. I am still using NNW for my daily reading and first level of research but I have a basic workflow to get it into DevonTHINK if I decide that is warranted.
I think I have learnt that having DT as the place where the files live is best but having other software as points along the way helps in the processing of all the information.
A dedicated script writing application is better than writing in DevonTHINK but I can still scratch out a Fountain formatted script correction in DT on my phone and send it to someone near a printer who can bring it to set.

This was longer than I expected but I’ve been rendering graphics out of AfterEffects all this time and been waiting for the ‘ping’ that just happened. Thanks for reading and all hail DevonTHINK!

@BLUEFROG @RDK
I copied @RDK 's script into a Keyboard Maestro loop (script, arrow up). I did it this way mostly for two reasons:

My AppleScript skills is not robust, so perhaps someone can step in and expand functionality to repeat with each item in starred list in NetNewsWire.

If you set property onlyAddNew to true then it first checks whether the group already contains a record with a given URL.