I have tried to make a few sync stores through dropbox that I have subsequently aborted. But I believe they are still taking up space on my dropbox folder and on my laptop. Basically my fault since I couldn’t figure out how to do the sync correctly. How do I find and delete the old sync stores from my dropbox and hard drive?

Did you delete them from DEVONthink’s Preferences >Sync already?

Merely deleting the sync location isn’t the advocated method as it leaves behind sync data.

Go into your Dropbox account.
In the Apps/DEVONthink Packet Sync folder, delete the unwanted .dtCloud directories. Those are the sync stores.

Thanks, I’ve done that too. But it appears that I have two copies of my database on my computer. One is the databases (approximately 200 gigs) and the other is the sync store (again 200 gigs). Am I syncing incorrectly?

The database is a separate entity from the sync store.

Whether the database being 200GB is correct or not is something only you could answer.

Regarding the sync store, you shouldn’t have any sync data on the machine from a Dropbox sync.
As noted in the Help > Documentation > In & Out > Sync > Dropbox… 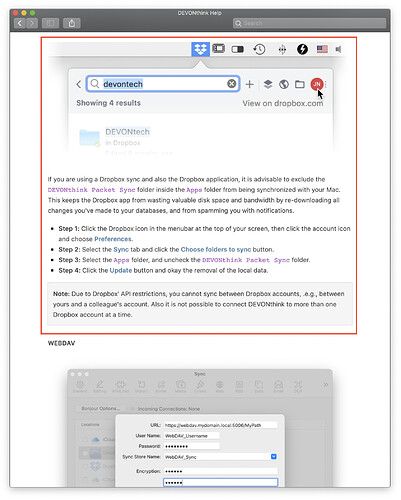