…which I guess should not happen. It is especially undesirable when wikilinking two documents in the same line with some text in between: both documents having an underscore in their name, this leads to the in-between-text and half of the document’s names as being shown as italic within the new WYSIWYG editor view.

EDIT: just to be clear on this: in preview, everything is set correctly. we are just talking the new editor here.

Underscores are a well-known alternative character for setting italics. (I actually use them more often than not.)

Misunderstanding: surely they are. But other editors ignore them when part of a WikiLink. At least Obsidian does and it seems like the right thing to do. Don’t you think?

weirdly enough, DT crashed for me for the very first time just now.

Because it is hard too see, the first wikilink contains one underscore right before “Peter”, the second contains two: one before and one after “Max”. 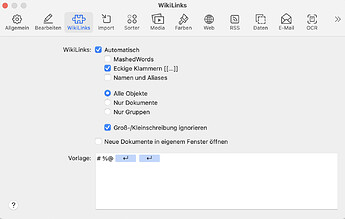 Similar behaviour is displayed in the left portion of the image on this post about transclusion; there, too, I would have expected the underscores before and after 1503 to get interpreted as part of the link rather than as code.

I also see it when having two underscores in a single link and then I can ignore it but if it goes over my own normal text, it really looks like an emphasis but should not be…

But in preview mode, this is not interpreted as italics. In none of the apps, including DT. So it seems weird to have it differ between editor mode and preview mode, don’t you agree?