No MindNode File Support in DDTG 3?

I’ve been searching for a storage/search/AI solution for a while, and thought I’d found it in DT 3. A powerful program that would take seemingly take any type of file I could throw at it, and be able to preview it and open and edit in the creating app without having to leave DT.

I assumed that in this modern day the iPadOS app would also allow me to do the same thing. But now I’ve found that apparently DTTG 3 does not support MindNode files stored in the Mac DT 3 app. I can search for them, find them, download them … And get a blank screen?

I found one article in the forum from a few years ago that gives some obtuse “workarounds” all of which involve storing MindNode files somewhere outside DT 3, which to me kind of defeats the point. I want my documents inside of DT, in logically grouped folders, and be able to work with them within the program, and take advantage of all of the features the program offers.

Is it really true that DTTG 3 can’t handle a popular file type like MindNode, or am I missing something here?

I’ve had no problem editing MindNode files directly from DTTG3, but there is no preview in DTTG. While it would be really helpful to have a preview, the real issue for me is that the file looks empty, and I’ve accidentally deleted some old MindNode files because of that. I’m guessing that the preview issue is really up to MindNode to fix, not DEVONthink, but it would be really helpful if there was a big image or other indicator in the preview area when a file format doesn’t have a supported preview feature.

I just did some poking around and the MindNode preview does show in the Files app, even within the DTTG location. I thought DTTG can show previews for anything Files can — is this not the case?

So how were you able to edit MindNode files in DTTG 3 if you get a blank screen when you download the file?

I looked at the DTTG 3 documentation and it doesn’t say anything about supporting MindNode files. I doubt very much if it’s a MindNode issue; a MindNode file is a MindNode file and it is obviously supported for preview and editing (sending to app) in DT 3. It seems more likely to me that it’s just not supported in DTTG 3. It would be helpful if a developer would clarify this.

Apparently from another post a few years ago, MIndNode files were not previewed or opened in DTTG 2 either.

In my DTTG 3 it shows the MindNode file, but does not show a preview of the file when I tap on it or long tap and select “open in new window.” I just get a blank screen. Are you sure you’re getting a true preview of the file contents in DTTG 3, or just an icon showing the file?

The share sheet is sending a MindNode file to DTTG 3, but what happens once you open it in DTTG? If I share it from MindNode as a MindNode file, it won’t open or edit in DTTG. It only opens in DTTG if I send it as a different type of file, such as a markdown file.

You’re not going to be able to edit a MindNode file in DEVONthink To Go. It’s a proprietary format.

As far as previewing, I don’t have any specific answer on why Files.app may preview it. A screen capture would be helpful.

When you use the open in MindNode option from the DDTG share sheet you can edit the file in MindNode. All the changes will save to that file in DDTG.

BlueFrog, here’s some screen of the same file in DTTG3 and the Files app. 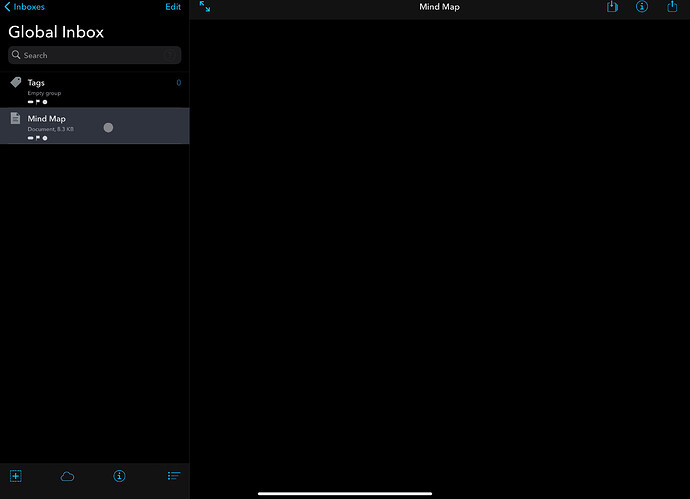 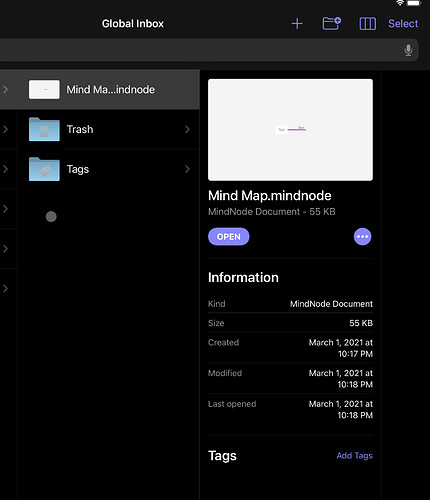 If I’m not mistaken Mindnode for iOS is able to export to various types, among which Freemind format and Taskpaper.

You or @eboehnisch might want to download the app and see whether it’s something you could work with. Whether there are enough users looking for such functionality and if it’s worth the time and effort to invest is of course for DT to decide.

FreeMind is a free mind mapping application written in Java. FreeMind is licensed under the GNU General Public License Version 2. It provides extensive export capabilities. It runs on Microsoft Windows, Linux, and macOS via the Java Runtime Environment. As with other mind mapping software packages, FreeMind allows the user to edit a hierarchical set of ideas around a central concept. The non-linear approach assists in brainstorming new outlines and projects as ideas are added around the mind ma...

If I’m not mistaken Mindnode for iOS is able to export to various types, among which Freemind format and Taskpaper.

The question is maybe more: Would people export their mind maps in a third-party format just to view it in, e.g., DEVONthink?

That’s a good question of course. I wouldn’t. Personally speaking I have no interest whatsoever in viewing mindmaps in DT(TG).

For example, if the data is saved as XML that the a proprietary software can read, I assume it’s relatively easy to also save the same data in a non-proprietary structure in a separate part of the XML file.

Like DT saves it’s files as a package, but in the end a user is always able to view the individual files. You might consider adding an XML somewhere to allow for importing a tree with groupnames for example.

I’ve made a note about FreeMind and we might add a viewer if we find one that is free to use and easy to add.

The question is maybe more: Would people export their mind maps in a third-party format just to view it in, e.g., DEVONthink?

Not me-that’s just too much trouble to do even once, but the export would need to be done every time the MN document is updated.

Oh, and I forgot to mention that iThoughts documents behave the same way-preview available in the Files.app and not available in DEVONthink To Go.

hether there are enough users looking for such functionality and if it’s worth the time and effort to invest is of course for DT to decide.

I also use Mindnode and would appreciated DTTG 3 support.

I wouldn’t export either; I think the other export options give you more of a text outline than a mind map, which defeats the whole purpose. And I want to be able to access in DTTG the same documents I can access and work with in DT.

I also use Mindnode and would appreciated DTTG 3 support.

Unfortunately, as stated above, the MindNote file format is proprietary. On the Mac we can use Quick Look to display it; on iOS there is no mechanism for extending Quick Look we’re afraid.