Notification doesn't appear when I import from Apple Mail

I just noticed this today. Using DEVONthink 3…7.2 with Apple Mail Plugin 4.0.2 on MacBook Pro 13" (2018) running macOS Big Sur 11.5.2 (20G95). When I import at item from Apple Mail 14.0 into DEVONthink, I no longer get a notification banner in the upper right corner of my screen. Instead, nothing. I can go look at DEVONthink and confirm that the imported item is there in the Global Inbox, but no banner. I like having the nearly instant confirmation that my import succeeded, but for some reason it’s stopped happening.

I don’t see anything relevant in the DEVONthink preferences, and here’s an image of my notifications preferences in System Preferences: 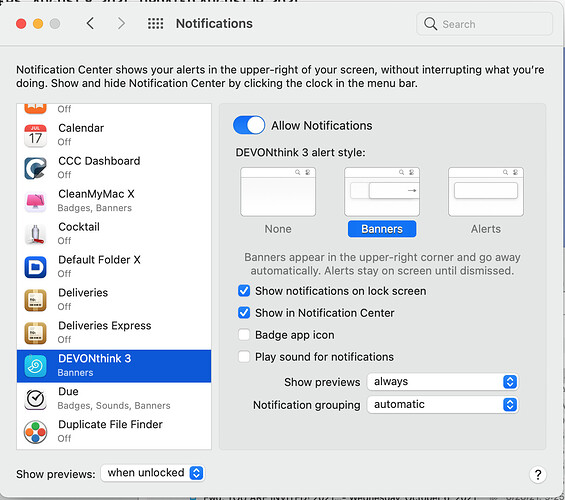 Is a successful import being shown in Window > Log?

No, nothing appears in the Log. Odd, because the imported item DOES appear in the Global Inbox, but I opened the Log window and did several imports, and nothing at all appeared in the Log.

Does it persist after a machine reboot?

I rebooted, then attempted several imports (each time a different email). On the first import, the Log window showed an import, but no notification appeared; however, in each case the selected email did show up in the Global Inbox. On subsequent imports, no new entry appeared in the Log window and no notification appeared, but the selected email in each case did appear in the Global Inbox.