Just messing around this morning, I made a quick little Automator action that converts selected URL text into a Bookmark in DEVONthink and opens the link in a new window.
I assigned a shortcut of Control-U, select a URL (in the address bar, etc.), press the hotkey and get an open webpage in DEVONthink Pro/Pro Office.

Note: It creates a group named TempURLs in the Global Inbox and a subfolder “URLs from …” and todays date in YYYY-MM-DD.

I don’t know if it’d be useful to anyone, but here it is…
DEVONthink Pro - Open Link.workflow.zip (86.9 KB)

Just to note that a Tabs > Open Location… script is available in DEVONthink 3.

Hi Jim,
I think you built the script I want/need back in 2016, but when I click on it to download, I see this:

…which doesn’t look like a script (but I don’t really know script anyway, so I shouldn’t comment

What I’m trying to do, is to automate DT3 to open a document by way of a DT3-created WikiLink when I am working from within another program. If this can be done, my thought is to just highlight a DT3 WikiLink and then do some sort of Automator shortcut that will in-turn lauch, in DT3, whatever the link points to. 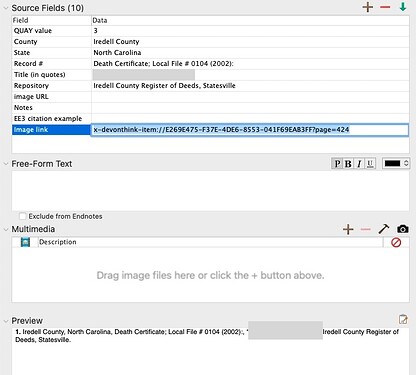 Curious if your .ZIP still functions in DT3, or if this automation can even be done in the first place?

@macula I really appreciate your comment because I never would have found this highly useful script! My hope is to skip this step and launch DT3 externally by way of a WikiLink, but this is exactly what I need in the interim–it’s perfect. A note to others who might stumble upon this by way of searching this forum however: the Tabs > Open Location script operates as intended, less perhaps the appearance of the text you paste into the URL filed. For instance, the looong wikilink you see highlighted in my image above, only shows the very last characters when I paste it in, but all characters before it are actually pasted in too:

Edit: @BLUEFROG though my post was obviously about automation externally, it occurs to me just now that that it would really be great if a future DT version or update could accommodate these WikiLinks right in the primary search bar up in the header. If this can be done, there would of course not be a need for that script anymore. Just a thought.

I’d have to look back for that specific script but here’s one that merely opens a URL in DEVONthink when one is selected in another app.
DT Open URL.workflow.zip (7.0 KB)

could accommodate these WikiLinks right in the primary search bar up in the header.

In the primary search bar" where? In DEVONthink? And for what reason?

I presume the .zip you gave me just now will work like a charm. Thanks for this!

In the primary search bar" where? In DEVONthink? And for what reason?

I am talking about from within DT3 in this particular use-case. Let’s say we have a dual monitor setup. DT3 occupies the left screen, and something else occupies the right. We’re in the program on the right, spot a DT3-created WikiLink, and want to examine it. As opposed to bringing our mouse leftward to click on DT3 to activate it, then to the top menu bar (which might be on the RIGHT monitor, to click the script logo, then hovering over Tabs to ultimately click on the script mentioned by “macula” in their comment above—why not instead just allow that wikilink to be pasted right into the primary DT3 search bar. “Enter” calls open the document.
Voila!

You’re welcome. It’s a pretty simple affair if you open it in Automator to look inside it.

The search bar is made for searching, not opening documents so you’d only be searching for the raw link in whatever documents it may be found.

PS: The script mentioned by macula is a separate script. The workflow I posted opens a selected URL. The script requires you to copy and paste or type a URL.

@BLUEFROG just wanted to tell you that the .zip you sent me works flawlessly perfect! Crazy fast too. I even tried to use it without DT running in the background. It booted DT and the document was still displayed within seconds.

All I had to do to make this work was click a button to assign the keyboard shortcut!

Wanted to point out though that maybe what you gave me was native all along?
Your .zip was an Automator workflow that ultimately booted through System Preferences➝ Shortcuts➝ “Services” tab, where I saw the following: 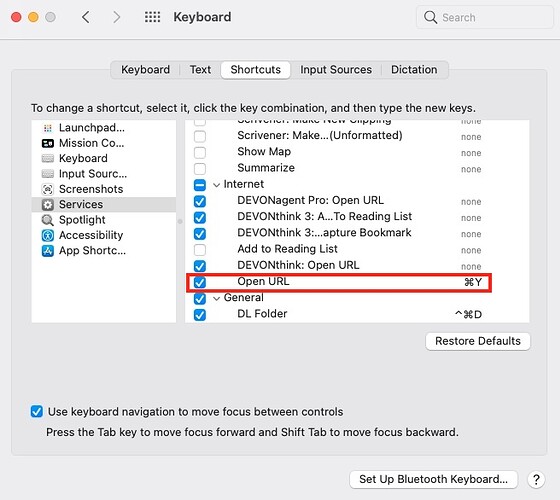 “Open URL” is I think what you gave me. It was unchecked at first, so I checked it and assigned CMD-Y. But maybe the one above it did the same thing? In any even, I’m good to go.

Digression… I spotted a lot of other unknown shortcuts by scrolling above the “Internet” category on that list, i.e. these: 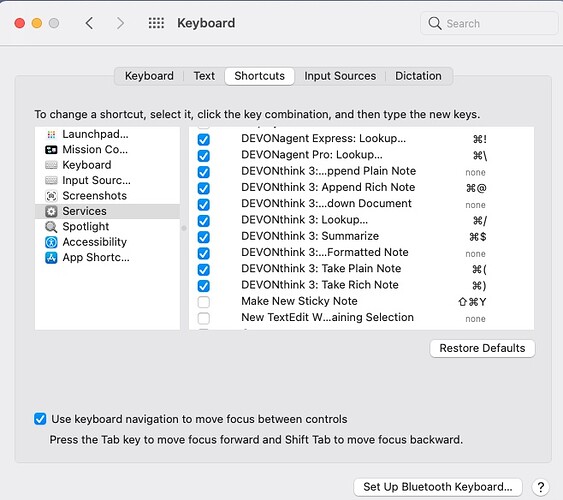 Never knew these were there! (still learning

Glad to hear it.

That other service isn’t ours. And yes, the services are covered in the In & Out chapter of the documentation.