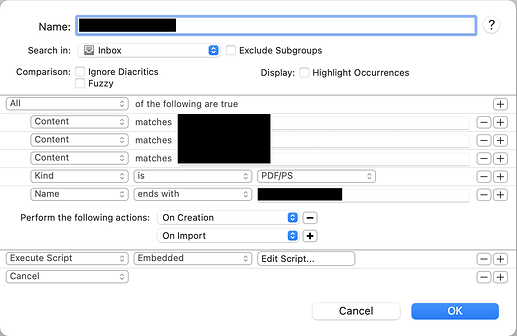 Does the record match the conditions? In case of a generic event…

…the conditions are relevant but in case of a specified name they’re not:

yes it does match; if I select the smart rule, then the record in question is listed and if I apply the rule manually, it runs.

Oki doki, I’ve found a solution. In the original script, I was not performing OCR via the script, but with a rule which does OCR Apply on PDFs with 0 words. That rule does not contain a cancel action, but obviously “uses up” the on import trigger, so no further rules run. I was aware of that, which is why I triggered OCR from the script above, and then assumed I would be able to trigger the rules on the OCRd file using perform smart rule trigger import event record theRecord. I actually don’t understand why that doesn’t work.

My solution is to revert to the script as it originally was (that is without the OCR component). Then I added the following script to my OCR Apply rule in DT:

With that, my smart rule (which I posted above) runs correctly.

Ahhh, there’s an old bug cropping up here too; I’ve seen this one before.