I set up a new User Profile on my Mac and I want to get the Save to Devonthink mail script working.

I have the Automation permissions set up: 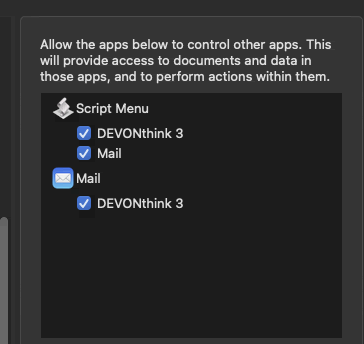 When I run the script, it fails with a briefly flashed error which I think has to do with permissions but cannot read quickly enough. But I do note that after the attempt to run the script the privileges have changed: 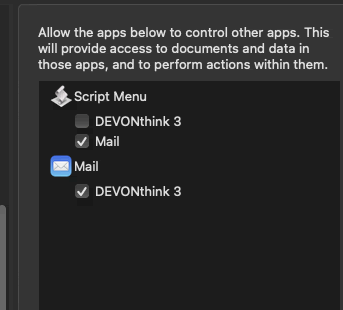 I re-enabled the privileges, rebooted, and tried again - same results.

When you run what script?

When I run this from Mail

Why would permissions like this disappear or get unchecked without my doing it directly?

You appear to be describing something unusual here.

I was setting up the new User Account via Microsoft Remote Desktop and for some reason some popup windows asking for approval to activate permissions did not appear that way (or maybe were blocked due to the screen resolution).

Glad to hear it.