For users of launching utilities such as Launchbar and Alfred, from which DT scripts can be used whether the focus is on DT or any other app, it is not easy to find applescripts, and therefore tend to forget the less used ones yet useful. In my system there are around 100 DT scripts. 200 applescripts in total for all apps; not to mention nearly 500 actions, workflows and services.

I have renamed the DT scripts I have included myself, prefixing them "DEVONthink - ". This makes it easy to choose among each app’s scripts. But if I rename the ones included with DT, they’ll surely get mixed up in a future app update. 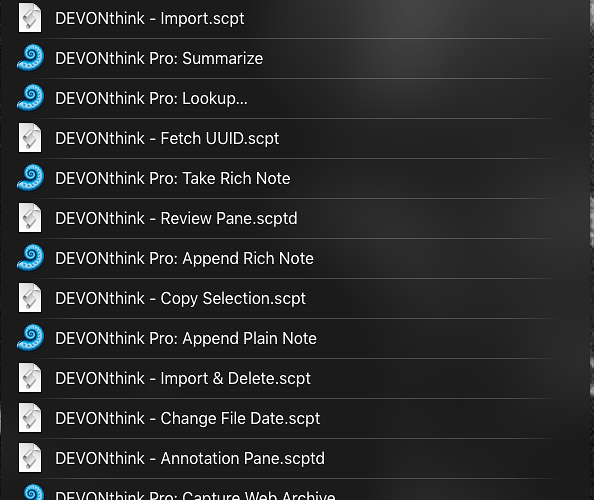 Which of the included scripts did you actually use? The best solution is probably to copy customized/renamed scripts to your own folder.

I don’t think renaming them would solve the problem because if the set of scripts gets updated by DT, I will not check them one by one to find out if anyone changed every time a new DT version is released, and rename again these. And any upkeeping must be measured against the sheer amount of scripts in a Mac.

Not to mention that scripts might become useful for a one off task. Scripts named “Move”, “Execute Perl Script” or “Look up…” are nearly impossible to find and to recall they are DT’s. As a result, they are just forgotten.

An this is why I make this simple suggestion.

An this is why I make this simple suggestion.

I suggest DT prefixes the applescripts shipped with the app. In case the usability scenario described here seems sensible to its designers.

Why don’t you add a custom list in Launchbar’s Index and add the AppleScripts to it? You can then edit the name there and the original name is still intact.

Why don’t you add a custom list in Launchbar’s Index and add the AppleScripts to it? You can then edit the name there and the original name is still intact.

Because scripts shipped with DT would appear duplicated (but with different names) in Launchbar because it indexes the whole Application Support and Scripts folders for all apps’ scripts -to set different folders up in Launchbar for each app’s scripts, among hundreds of apps, is not really a workable option. Unchecking the originals in Launchbar index would mean repeating the unchecking operation 80 times.

Also because I would have to compare the original and the renamed scripts one by one to check if DT has modified or added an original.

On the other hand, their current names leaves up to the launching app user to guess to what app “Send (Mail)” and “Send to Instapaper” refer to. Even without leaving DTechnologies apps in this limited example, it is not easy to guess which one refers to DEVONthink, and which to DEVONagent.

This is not a turning point concern about an app I am very satisfied with. Nevertheless, I do believe it negatively influences the experience of users of popular launching applications.

I have no metrics on how many people are launching AppleScripts with Launchbar. I know i don’t personally (and prefer Quicksilver, which I still don’t use for that purpose).

Unchecking the originals in Launchbar index would mean repeating the unchecking operation 80 times.

This wouldn’t be something you’d have to perpetually do.