Problem sharing to DEVONThink from Notability in macOS 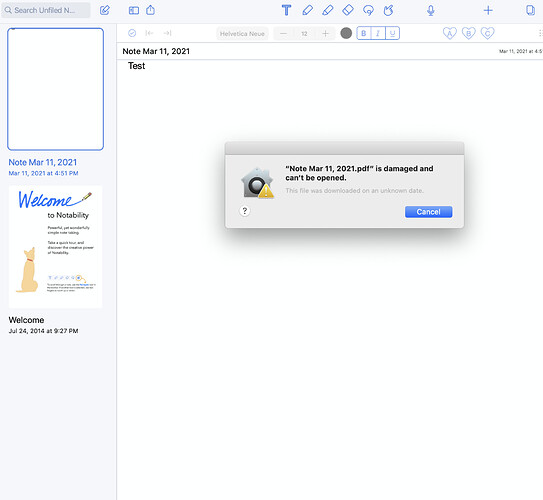 I’m on DEVONthink 3.6.3 and the new Notability 10.3. I see same error. I do not know if this was a problem with previous DEVONthink and Noteability versions (as I don’t really use Noteability after giving up on it years ago).

I clicked on the “?” on the error message and it says:

The app has been modified, and its code does not match the original signed code. The app may be broken or corrupted, or it may have been tampered with. If you think that an app has been damaged or tampered with, you should delete it by dragging it to the Trash.

Some apps and tools, such as AppleScript or JavaScript applications and some legacy tools, modify themselves after signing. These types of apps cannot be opened unless you override the security settings on your Mac. See Open an app by overriding security settings.

It’s Notability that appears to be throwing the error. Don’t know as I can’t find the downloaded file. Sharing from Notability to other apps work fine (the ones I tested). All indications are that it’s an issue with the new Notability app independent of DEVONthink–it can’t import what doesn’t seem to exist supposed to have been created by Notability. Probably should be reported to Notability. Or as suggested by the error message, change your security settings on some app, but I don’t know which app or what the settings should be.

Meantime, just File/Export to PDF is my best recommendation.

I’m on DEVONthink 3.6.3 and the new Notability 10.3. I see same error. I do not know if this was a problem with previous DEVONthink and Noteability versions (as I don’t really use Noteability after giving up on it years ago).

Are these downloaded & afterwards directly imported PDFs? Then clearing the extended attributes of the PDFs via the Terminal command xattr -c path might help.

I cannot find the downloaded file. If downloaded (controlled by Notabiility, I assume), its buried somewhere deep without a PDF extension, I would guess. I’m not pursuing the problem as if and when I use Notability again (unlikely!) I’ll just export. I was just curious about the report and as I had both apps, thought i would look into it. Notability version released yesterday or thereabouts. From all evidence, my hunch is it has nothing to do with DEVONthink.

no, it is happening on freshly created pdfs within notability also.

I reported it to Ginger Labs and DEVONtech but I was hoping @BLUEFROG would have some ideas on why this is happening or if they have seen it before.

Devontech said its not a DT error message. have not heard from ginger labs. it could be a macos issue but I would never waste my time reporting it to apple.

I can confirm the issue. I filed a report with Ginger Labs too, so perhaps we’ll get some resolution on it.

Awesome! Thanks for your help!

No problem. Hopefully we can get this sorted out.

I never got a reply from Ginger Labs other than the “We received your support request” auto response. Did they acknowledge you?

Nope. Only the same response as you.