No worries! What kind of content is on the documents that switch focus?

@BLUEFROG thank you, this rule / script is extremely helpful! would you mind taking one additional step in the script? as opposed to @jeep in my imported folders the formatted note with the link and the actual content file often do not have the same name.

to give an example:

does that make sense?

thanks for any help or pointer you could give me…

Formatted Notes in all cases. It’s very odd. On the MacBook, focus stays on the list. On the iMac, focus consistently moves to the note content for some notes but not others.

Jeep - Welcome to DT! I’m fairly new - for a second round - too. Leaving EN behind with more than 12,000 notes. I’m curious to know how you went about importing your entire database? I haven’t done it yet because I haven’t had luck with the EN importer and it’s way too many for me to do folder by folder. What did you find was easy for your approach?

Thank you for the welcome @danielscw! I simply used File --> Import --> Notes from Evernote. I did a few Evernote notebooks individually, then got more confident in DT’s capability and moved onto doing them in batches. It seemed rock solid to me, I haven’t noticed any issues in DT except for the superfluous groups / notes mentioned in this thread.

I have to give Evernote credit, it’s always been easy to get content out and into other apps like Apple Notes. OneNote and Apple Notes would have locked me into PDF export only, which is useless. I experimented with Eagle Filer which has a lot going for it, but the lack of an iOS app and the import of Evernote files into RTFD (which is a painfully idiosyncratic Mac format), among a few other issues, were dealbreakers. Obviously, DT takes import and export options to a whole new level.

I don’t know if this helps but I uninstalled the newer version of Evernote very soon after it was released and installed Evernote Legacy instead. The new Evernote lacks a lot of features, in particular AppleScript. My grandfathered $45 a year Evernote Premium plan expires in a week so there’s no going back now!

This may be my problem - I’m running the new version of Evernote and not getting the importer to work properly. Thanks for the link. Downloading the older version now and will report back.

I should add - my premium just recently canceled and it was the first time in many years I’m without that version of Evernote. It’s a wild feeling but I have to say there’s no looking back with DT. I love it.

moved over from EN in october and fully agree - DT is playing in a different, better, league…

I normally select View->“Show only Documents” to hide the obsolete Evernote groups. Furthermore I almost always sort by “Date Created” (as I used to do in Evernote). This way the imported (empty) notes are usable enough, as they serve as archive only.

I just noticed this thread–going to take a look at this script as I still have a TON of Evernote crap to get through.

My EN subscription doesn’t end until August, but I’ve cleaned everything out–only keeping it active in case I’ve forgotten about an automated flow that needs to be redirected to DEVONthink

As a newbie, how does one “run” this script in DEVONthink?

As a newbie, how does one “run” this script in DEVONthink?

You can’t run this script directly, it can only be used in a Smart Rule.

There are several ways to actually run a Smart Rule. From help:

There are two commands in the Tools menu related to smart rules:

In case of this specific Smart Rule you could simply use the Smart Rule’s contextual menu to run it.

As mentioned in Bluefrog’s post it’s a good idea to first test the result with duplicates.

To add to the excellent guidance from @pete31.

If you right-click on the new Smart Rule (which can be found at the bottom of the Navigation sidebar) and click Edit… then up pops a window that looks a bit like the Smart Groups found in Apple Photos or Music. Where it says “Search In”, change the folder to be the one with Evernote files that you want to ‘clean’. (I personally chose Evernote folders with only a dozen or so items until I got confident in the process – I also duplicated a few folders as test cases, as @BLUEFROG and @pete31 suggested.) Click OK to save.

Then left-click on the Smart Rule again in the Navigation sidebar, and main Devonthink window will show all the superfluous Evernote files. Check these look ok. Each will generally just be a small stub file with nothing but a single hyperlink to a PDF or similar. Occasionally you may find more content in this, in which case you should go back into your Evernote folder and manually clean that up if required.

Once you’re comfortable with what’s shown in the Smart Rule window, select Tools > Apply Rules. For each small stub file, the rule will move the linked PDF (or other file) up to the root of your Evernote folder, delete the small stub file, and then remove the empty folder.

Thanks for the detailed explanation Pete!

@jeep, I’m unclear on the first step. I do not see a “Search In” when I right-click on the “Clean Evernote Imports” Smart Rule. This is what I see: 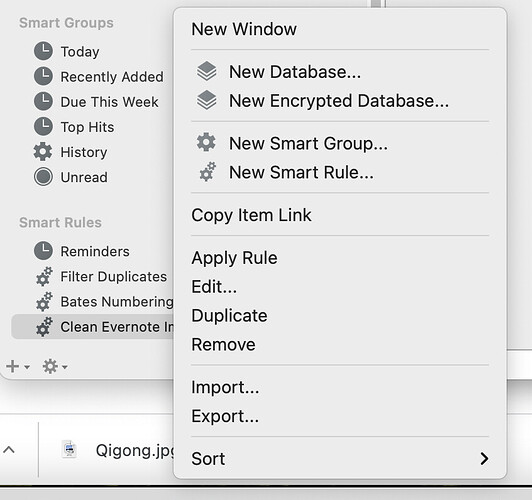 In that popup window, click on Edit… to open Smart Rule edit window which has the ‘Search In’ parameter

That’s what I thought, got it. I’ve got 60 Evernote folders

Good luck, and thank you again to everyone on this thread but especially @BLUEFROG and @pete31 for their kind support.

FWIW I have found DT3 a superb replacement in all ways and am hesitatingly starting to migrate some Hazel scripts into DT3 as well. However… I still prefer the results from the Evernote web clipper. It creates a neater simplified note for many types of pages. So I now manually archive my Evernote web clips monthly into DT3 and using this rule where necessary. (I also adapted a few AppleScripts I found along the journey to export to Apple Notes for sharing with my wife, but that’s another story.)

@jeep I’m quite interested in how you “archive” Evernotes monthly to DT.

It sound like a 1-way sync of EN → DT, but you do you get only the most-recent-this-month notes out of Evernote?

I’m just using Evernote as a temporary holding point – I delete the notes from Evernote once they’re imported into DT. (You could move them somewhere else into Evernote, but the whole idea for me is to strip Evernote down to nothing except a conduit for certain content e.g. web clippings.)