is there a way to quickly create a new note/item in DTTG3? Pressing the + sign and then go through the steps is tedious.

I want to replicate how bear does it (press the + sign and you are in the note already, cursor is in the title field and pressing the < button brings me back to the inbox). In DTTG3 i have to do all those steps:

Long-press the app icon > New Note. The title will be generated from the first line of no title is explicitly entered.

ok just tried it. isn’t that basically the same workflow as i described except it skips the first two steps?

edit: though i am already in DTTG anyways

The title will be generated from the first line…

When I have tried that, the title is generated from more than the first line.

agree with @Greg_Jones title is generated from the entire note

title is A B C and the description is

works through Drafts with the createmarkdown URL endpoint though

I created a simple shortcut and added it to my home screen. This way I just get a prompt for typing my note and it saves my note in my inbox. Works fine for me. 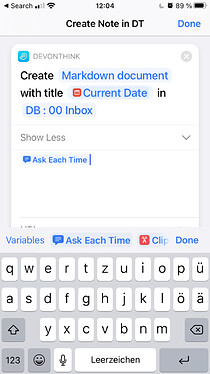 Put a period at the end of what you want to be the title. It doesn’t even need an additional paragraph.

This note. This text.

The above line will be titled “This note.” You will have to press the right arrow and it is in the exact location as the done button on the following screen. A rapid tap-tap seals the deal.

Well, it’s not the same if it’s two less steps

That doesn’t work for me. the description will still read This note. This text 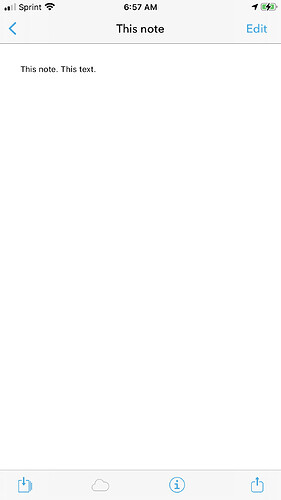 Cheers, I guess I am doing the same with Drafts and the callback API.

Here’s my shortcut. I use this multiple times during the day, and the cool thing is the text I speak is appended to my daily note. Temp means temporary. I distribute the note entries to where they need to be later. This quickly became my ubiquitous inbox for text, replacing Drafts App which served me well for a few years.

The options under the dictate text command in Shortcuts allow you to have the recording end at either a pause or by pressing a button. I’m generally using it hands free so I selected pause. I do wish Apple allowed us to lengthen that pause, but if Siri cuts me off too quickly, I just speak another note which will be appended.

I like this. Might get me into use Siri more. I added “Current Date” just of “Dictated Text”.

Thanks, i just tried it. I am not hugely into siri (quality never worked for me) but i cannot get it to work with the pauses. i was reading off a news article to test the feature but siri stopped after a few words. I didn’t take a pause or anything. and that is the long version of ‘pause’

works fine with the ‘Tap’ though.

edit: I am playing more with it and even the tap doesn’t work. I dictated an entire paragraph and all i got transcribed is Die in welche Stadt. (mind you, welche stadt doesnt even occur in the text ;))