Does anyone know how to get DT to remember what groups are expanded? Every time I exit out and come back in, the same groups are open, which were not open when I closed.

I’ve got an accounting database with groups by year:

When I exit out, I’ve got 2020/April/Expenses expanded, and everything else closed.

Every single time I open the app, it’s got 2019 expanded and I can’t remember the months that are open. 2020 is closed.

It’s as if I’ve somehow told DT to do that, though I haven’t on purpose.

Is the automatic expansion of the sidebar enabled, see Preferences > General > Sidebar? In that case disabling this option might change this.

Hi. There’s an option to automatically expand & collapse sidebar, and that’s checked. There’s a retain view for interface as well. I’ll play around with these.

Disabling this option should help.

None of the settings seem to help, though I’m likely just missing something. DT continues to expand a random path of folders when I open it.

Do you open just a new window or launch DEVONthink?

I’d like to inform that I am also aware of this issue, and the Automatically expand & collapse option is unchecked.

Until now, each time I launch DEVONthink, the same 3 specific groups (and some of their specific children) will be expanded even though in the previous session I have collapsed the groups

Until now, each time I launch DEVONthink, the same 3 specific groups (and some of their specific children) will be expanded even though in the previous session I have collapsed the groups

Screenshots before quitting/after launching would be great plus a screenshot of Preferences > General - thanks!

then I press ⌘, for preferences 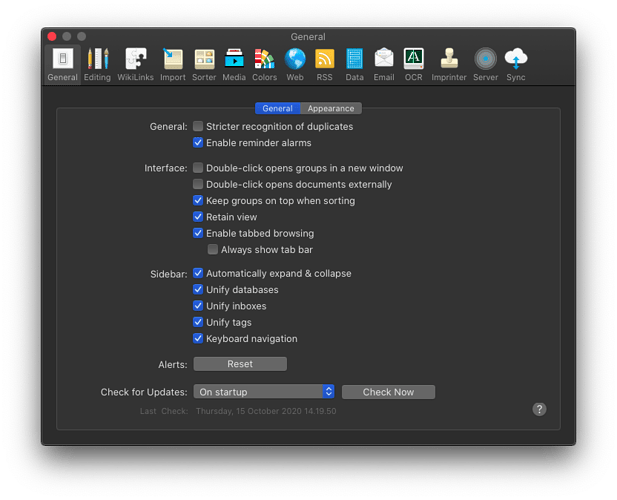 then I close and relaunch

Edit: the preferences show that all is ticked, but it is the same if unticked

Are these the correct screenshots? Because the first and last one are actually identical (and therefore it would work as expected).

sorry, I just noticed that you expect a screenshot before quitting (with the groups collapsed)

here they are, you can check the image name for timestamp:

more information @cgrunenberg:
I just noticed that the groups that are auto-expanded on startup are Increment with specific three of its child groups, and MacStories. The other groups will remember last session’s expand/collapse state.

Is a verification of this database successful?

I tried to be a little “out-of-the-box”, I created new Group New Group, then I put the Increment and MacStories group inside it.
I quit and relaunch and verify database a couple of times, then tried put those two Groups in the original place and deleted New Group.

This is not even a mildly annoying issue, but after I monkey-tested this for a while, I started to accept the way it is now.

I tried to be a little “out-of-the-box”, I created new Group New Group , then I put the Increment and MacStories group inside it.

When you quit and relaunched, was the New Group expanded?

no, it is not expanded.
after I relocate them to the surface of the database, the auto expand continue the exact previous behaviour tho (Increment and MacStories expands)

If all looks as expected, quit DEVONthink, drag and drop the copy on your desktop into the Preferences folder and overwrite the new file. Then relaunch DEVONthink.

Are the groups still expanding on launch?

hi, unfortunately deleting defaults don’t fix this issue. I also tried cleaning my mac with Onyx and it don’t effect the groups’ expansion state. (I did that with the logic that Onyx cleans the directory open state in Finder in list view).

fortunately, my last resort finally fix this issue. I remade the parent groups.
I did Ungroup Items then Group Items with the same previous parent groups’ name.

I think this final approach —while it seems not a best practice— is safe to be also done by the post starter @TeacherBart, as this won’t affect item linking or classification AFAIK

anyway, thank you for your helps and proposed solutions @cgrunenberg @BLUEFROG !

No problem and thanks for the assistance.