as DTTG becomes more and more powerful and as iPadOS is maturing, many people (including me) will be able to work with DTTG on iPad exclusively.
But… we’re not there… yet.

As of today, I’m still in the need of Devonthink on my Mac from time to time, one example is the extremely tedious and time consuming file sorting process in DTTG. Having to move every single file manually into its own folder compared with the „Move To…“ shortcut/menu in DT is like night and day.

Another direly needed function in DTTG is a proper backuop function! I’m not even talking about an incremental backup (wishful thinking), I’m talking about the problem that as of now one can’t properly and reliably backup the files and folders in DTTG.

When trying to move/copy/“backup” folders in DTTG in my iPad to an external SSD or to a folder in the files app, this happens - depending on my process: (see attached screenshots). 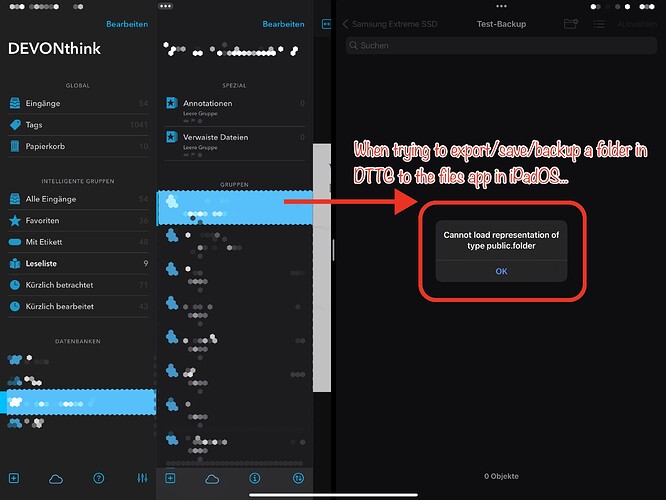 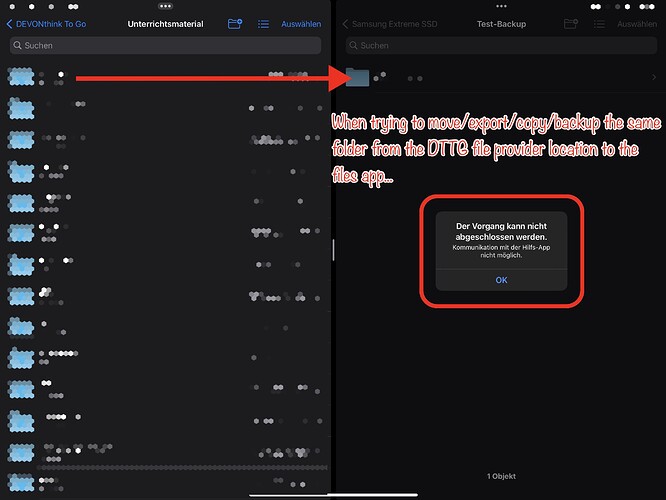 To put it in a nutshell: I’m not even able to simply copy (aka “backup”) all of my folders in DTTG to an external location without getting these error messages!
Sometimes this procedure works but even then I’m not sure that really every file has properly been copied.
For what I’ve experienced this problem has been there for over a year now.

It is problems like these which make people say „iPadOS“ (or its file system, to be more precise) hasn’t matured into a “grown up” file system yet.

Is there something we could do in order to have proper, reliable backups without having to rely on first syncing everything to a mac and then doing the backup there (which is what I do)?

Is there something we could do in order to have proper, reliable backups without having to rely on first syncing everything to a mac

You could try lobbying Apple to provide a real filesystem on iPadOS. But I wouldn’t hold my breath.

But I wouldn’t hold my breath.

No, but I seem to remember you don’t advocate inhaling dead canaries either, so I’m not sure what your position on breathing is

Soooo… a part of the dev team liked your comment but so far hasn’t replied yet.
I hope there’s more on the horizon than that „urg urg, that’s funny, but hey - just deal with it“ attitude, which I have the impression is bustling around in this thread right now…

Moreover I’m sure I’m not the only one here who likes to switch to iPad only when it comes to Devonthink but still can’t make the jump because of exactly these reasons.

I’m aware that one “just can’t bake in a backup function” but I wonder why this problem has been around for quite a while now. DTTG could be way more than being just a compagnion app and if you guys want to gain a new iOS/iPadOS (only) audience there’s much potential to exploit here - but this also requires offering some important tools for professional users, which are (among others):

I’d really appreciate getting some background information on why these errors occur. Moreover, how about a „export all files and folders as zip" option?

DTTG is more Eric’s (@eboehnisch) terrain, which is probably why you have seen no response from Criss, despite his having seen the post.

Before going ahead and making a silly comment, I had determined that the same error occurs here too. Searching the web for cannot load representation of type produces a large number of hits which together leave me with the impression that DT may not be able to solve this. The only thing I can come up with that you would be able to influence yourself would be the security setting for locking DTTG; but I’ve had no success toggling that, and still receive that error you described. My files are all downloaded (and not on demand), which was the only other thing I could come up with.

Apple has not yet implemented a realreal file system on iOS. That is purportedly part of their security concept for the platform (preventing apps from modifying the files of other apps). I don’t know if that’s the real reason.

In any case, the limitations of the platform are biting developers of many apps, and they choose different strategies to work around them. For example, Drafts goes with its own silo of files that are not accessible from anywhere else. DTTG, on the other side, offers their database and groups as folders and the records as files in the Files app.

In any case, I think it’s pointless to take developers to task for something that’s a shortcoming of the platform. And I for one don’t envision going iPad only any time soon. I need a keyboard to type fast.

Thanks for replying to my last post, guys - I appreciate your explanations.
We’re on the same boat here and I definitely see much to be changes when it comes to the file system of iOS.

Btw, Chrillek: Things have changed a lot when it comes to the input/typing experience on iPads. I absolutely love my (M1) iPad Pro keyboard with integrated trackpad.

Let’s put it like this: The freedom of such a light, robust and portable, powerful, LTE-supported device with a multitude of input and media capabilities + being able to disconnect it from its other half (aka keyboard) put way more weight on the positive site when compared with its downsizes (namley file system, no 3rd parties, no real background processes) in my experience.

Well, in the end I hope we all profit - mac users, iPad users, Devonthink lovers…

Seriously: I tried typing with external keyboards years ago. Never found it really convincing. I’m a 10-digit-typer (is that the term?), and these keyboards are just too narrow to be comfortable for my adult hands. Also, I can type with a notebook on my knees, but doing so with an external keyboard and an iPad proved quite hazardous.

Back on topic: There seem to be shortcuts permitting to create zip files (I found some searching for “iOS zip shortcut”). Maybe they could be a building block for a hand-crafted backup process? I didn’t have a look at that because I’m still using a Mac which gets synced with the i*OS devices and backed up to different locations. The main problem might be to get the zip files away from the iPad automagically, though.

I think you have answered your own question as to why DTTG is great as a secondary tool but should (almost) always be used in conjunction with DT3 on a Mac.

You are trying to make your refrigerator into a toaster.

Piping in for a second, remember groups don’t exist in the filesystem (on Mac (unless indexed) or mobile). So dragging and dropping a group to Files.app yields the error.

Also, bear in mind DEVONthink To Go has a shallow sync option that could pose problems with your export as ZIP suggestion. What’s to be done with shallowly synced files, i.e., ones having no content? Download the contents temporarily and purge them when finished? Not only would we have to consider space limitations, but quite a bit of overhead in such a process.

What’s to be done with shallowly synced files,

If I understand @Akuro correctly, they are not synchronizing (or dont want to?) with a Mac because they want to use only DTTG without the need to use DT. I suppose that’s not (yet?) what a lot of people do, though.

That’s quite possible.
However, you can still use a shallow sync between Apple mobile devices.

DTTG is more Eric’s (@eboehnisch) terrain, which is probably why you have seen no response from Criss, despite his having seen the post.

That you cannot drag folders to the Files app is simply a shortcoming of DEVONthink To Go together with the way the file provider protocol is defined. Both, dragging folders to Files as well as an backup-everything-as-Zip is on our to do list. But, as stated more than once: we’re a tiny developer and so have to do things one after the other. 3.5 was the release for the new editor, now off to the rest of the list.

That’s awesome to hear, Eric!
Yeah, I’m aware of it and this (together with your excellent product updates and the fact that there’s no real alternative for DTTG) is the reason why I actively promote and recommend DTTG in various presentations and workshops as a solution for professionals who work with the iPad.

Keep the great updates coming - can’t wait to see what the future of DTTG and iPadOS 16 will bring (hello, stage manager and memory swapping!)!

Especially memory swapping will surely be a boost for all memory-intensive apps like databases, graphics, and more.