Just to be clear, you can have automatic bullets in DT3 RTF files (which I think is what you’re after):

Opt-tab on an empty line will start a new list with – as the header, which will then behave as a fully compliant list.[^1] But there’s no way to start a numbered list, or to just • or any other leading element without using that awful list dialogue.

[^1] This works in every standard RTF editor based on Apple’s TextEdit engine, as far as I know (in Scrivener, too). The only exception I’m aware of is Tinderbox, which hard codes opt-tab to move between panes — and it doesn’t give you a menu item so you could choose a more sensible shortcut, either, which is irritating. These are only niggles in otherwise excellent programs…

But there’s no way to start a numbered list, or to just • or any other leading element without using that awful list dialogue.

Do note the list dropdown is in the Format > Format Bar now. You should check the dropdown to ensure the hotkey has been registered. 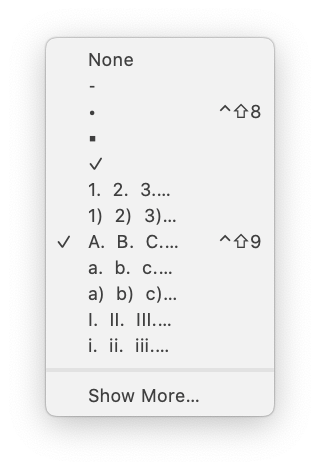 Do note the list dropdown is in the Format > Format Bar now. You should check the dropdown to ensure the hotkey has been registered.

BLUEFROG, I’m curious as to why DT requires us to use a keyboard command at all? Again, I go back to Notes.app as an example of a fluid and frictionless way to handle lists. It requires no memorization of keyboard commands, no interruption in a train of thought, simply type a dash (or whatever) to immediately conjure up a list and keep typing. It’s so natural and simple.

If I understood the reason you consider a keyboard command to be superior to what Apple does then perhaps I would warm up to the idea.

Also, just an aside, the list dialog could be made a bit less awful if it remembered the last selection instead of reselecting your favorite list type each and every time you opened it. 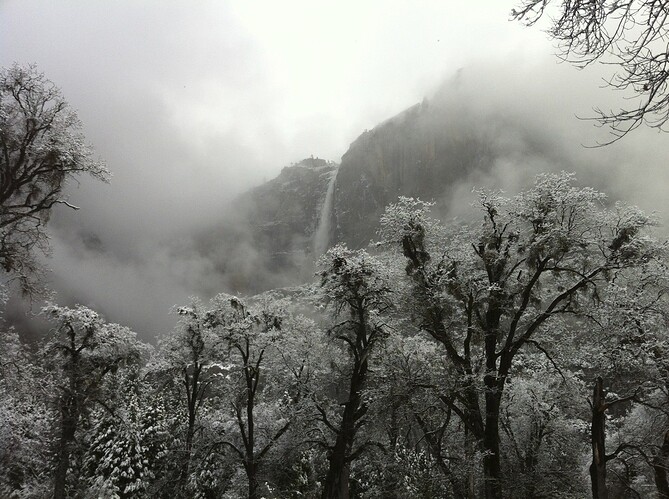 Shot on iPhone 4 in Yosemite Valley, straight from the camera

Beautiful, imagine what he could have done with an iPhone.

Thanks for the correction!

I was using the List icon on what I now discover is called the Editing Bar, not the Formatting Bar, which I didn’t have displayed. The Editing Bar icon only brings up the Edit List dialogue.

Unfortunately, the same icon has two different results, depending on which toolbar it’s in, and the main format menu only brings up the (still awful) dialogue. I should have looked further…

I think you’re misunderstanding Varen’s request a bit here. You’re talking about the rendered view of a Markdown document, what DT calls Preview. I take Varen to be talking about a similar kind of formatting taking place in what DT calls Source mode and what is known in plain text editors as syntax highlighting. Take a look at two views of a document in Obsidian:

The first is the rendered view: 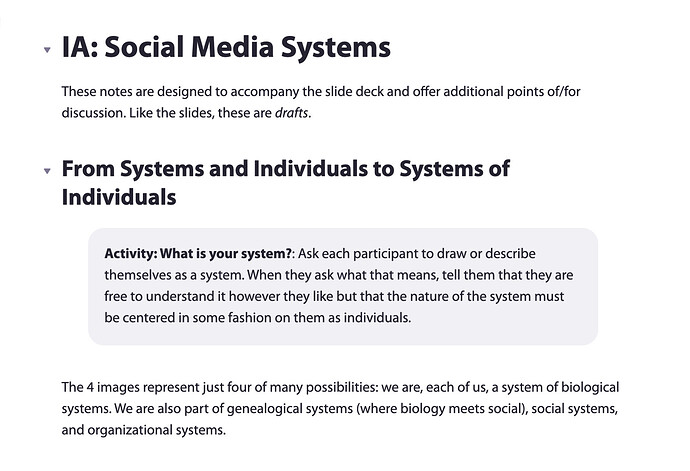 And then here is the source view: 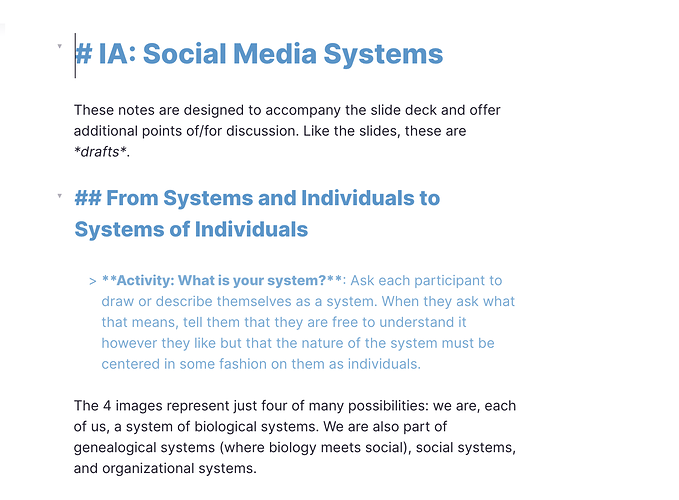 I understand I can tweak the CSS for the rendered view, but it would be nice to have similar options for the source view, or at least better defaults.

@laudunum - Amen, you illustrated my point better than I did. Thanks!

Just one note is that I feel this should be extended to all types of documents in DT including RTF, notes, plain text and markdown.

There’s a lot to like in some of the new breed of PKM apps, but I keep coming back to DevonThink. I’ll be the first to admit, that I have never loved DT’s UI. It has gotten a lot better, and I know they have to be cautious not to break anything because there are some serious users out there who have thousands of items in their databases, but here’s hoping for things like syntax highlighting or, dare I say it, an interactive graph view a la TheBrain or Obsidian.

@laudunum speaks for me in his two most recent posts.

Like @laudunum, I keep leaving DevonThink for other PKM or writing apps that offer more attractive and easier to use writing environments–or trying to use one of them as a front end to DT, so to speak–and then returning to DT for all the things it can do.

@BLUEFROG Yes, Ansel Adams did brilliant work with primitive equipment, but nobody argues that the cameras he uses should be the best available today!

Development is aware of the request but currently there are no plans to implement a hybrid view.

I like to write in Markdown, it works really well for most cases. For long-form writing I would also like some kind of syntax colouring in DT. Nothing fancy is required, but something like most code editors do for example: 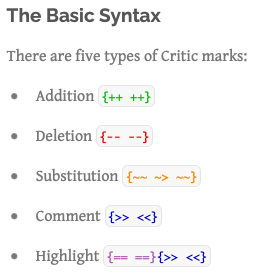 Goodness, no one said it was, and no one was suggesting imposing it on you or anyone else. Some of us were simply suggesting that having it as an option would make our writing easier. (I’m a little concerned about the amount of scorn being heaped here.)

For myself, I really enjoy the hybrid source view, it is more in keeping with the very thing that the original Mac introduced, WYSIWYG. As someone with more gray hairs than brown these days, I also have a fondness for the more UNIX-y approach of WYSIWYM. For me, the hybrid view gives me the best of both worlds, allowing me to move, and write, quickly.

If you don’t like it, okay, but your hatred doesn’t make the discussion here any better. If your attitude reflects that of the developers, that lets me know where to invest my time and money going forward.

For the developers, I will only note that syntax highlighting is immensely popular across a broad range of apps and applications. Maybe that popularity is worth taking note of?

You’re reading far too much into my comment and there is no scorned being heaped anywhere. I didn’t interpret your comment of ”I have never loved DT’s UI” as rude or scornful. It’s your opinion and you’re welcome to it.

The forums are a place to freely exchange opinions, civilly and without ad hominem attacks, of course.

Although DT’s function is great and it is my daily software, it’s UI is ugly and outdated. Especially the writing environment, like 30 years ago writing on notepad in Windows 3.0. So I use 3rd editors such as Typora, MWeb, etc.

And I have already lost my confidence that DT could build a beautiful UI. I believe that DT’s developers are talent, but DT’s team needs a better UI designer. From DT 2 to DT 3, the UI does not improve a lot, and the same as from DTG 2 to DTG 3. I love DT’s function and bought them, just lost hope on its UI.

Especially the writing environment, like 30 years ago writing on notepad in Windows 3.0. So I use 3rd editors such as Typora, MWeb, etc.

I see no problem with using 3rd party editors for an enhanced writing environment.
From a office perspective, our standard is MS Word
I’m satisfied using DT’s editor for personal notes

At the risk of stepping on toes, @BLUEFROG I think what @laudunum is suggesting is that when a user offers a suggestion to improve DT, instead of receiving a response like

I personally hate the look of a hybrid source view

a more constructive response could be an analysis of how it might fit into the scheme of the application, perhaps even a nod of acceptance. In other words, when a customer gives sincere and valuable feedback (especially with the general support of the thread) it be considered, FOR REAL, and not dismissed by a comment as negative as you suggested. After all, the reason we’re all here is because we all have something at stake in DT and if we make a suggestion for improvement we could reasonably expect a serious consideration of the proposal not a cut down.

I suppose the bottom line is whether DT is a user driven application or are the users simply along for the ride?

Although I’m not a native speaker, I am under the impression that

I personally hate the look of a hybrid source view

is the expression of a private opinion, not the statement of a company. I may be wrong of course (since perhaps “personally” means something else entirely). But assuming that I’m not: @BLUEFROG is entitled as much to their personal preferences as anybody else here. They did not say (or did they?) that DEVONtechnology as a company considers a hybrid source view as hideous or hateable and therefore is not going to implement it.

So it might be sensible to calm down a bit, perhaps? I, for one, am not against a hybrid source view (and I’ve written something like that for a minor-mode in Emacs once). Personally (sic!) I’d love to be able to customize this kind of hybrid view with CSS in DT. Although I have no problem to use an external editor for MD either.

I’d like to know where you see the constructive part of @Octavius’s response is. There were only opinions expressed, none really flattering, but legitimately this person’s opinion. That is acceptable as no overt personal attacks were made.

As @chrillek noted correctly, I clearly expressed my personal opinion. Also, I am not merely an employee of the company but also a user (with many, many thousands of hours of daily use). This means I also have my own opinions and also a stake in it myself.

And don’t think I have ideas that haven’t been implemented; some that likely never will be. But just having an idea isn’t enough as the feasibility, broadness of appeal or benefit, and also our own company trajectory has to be considered. There is also a long list of things we could do that could never be all implemented in a lifetime.

I also stated we are aware of the request and that there are no current plans to implement one. That doesn’t mean there may not be in the future, but I said: current plans.