DT is a wonderful program! Of course, nothing is perfect and one of the items that I frequently become dissatisfied with is the visual presentation of new documents such as notes, rtf and markdown.

DT is great at saving and managing a lot of data but it should also be a beautiful place to write since collecting all that data usually means you’re doing something with it and in my case, it’s to write stuff.

Search the App Store and it has two dozen apps that claim to help you write “simply” or “beautifully” with no distractions. In most cases, their formula is virtually identical; they give their users a distraction free environment with a lot of white space and minimal controls.

Unfortunately, DT offers the diametrically opposite; a visually overwhelming interface chock full of controls, panes and options. I know the interface was designed with information management in mind and the version 3 overhaul is enormously successful but DT just doesn’t cut it as a writing environment for anything more than a note.

By now you’re probably thinking “but what about full screen mode?”. IMHO full screen mode for writing is a failure in most Mac apps, including DT, because it takes the user to the other extreme — a blank screen and a blinking cursor with no tools at all. This is too severe for me and prevents me from easily accessing my reference material I keep in DT to support my writing in the first place.

Consider Scrivener, it’s A LOT like DT in many ways yet it’s focus in squarely on writing and allowing the writer to easily access reference material. If DT offered an even slightly less cluttered “writing” view with user configurable tools and lots of white space around the text then more people (myself included) would suddenly find new uses for DT and those bitcoins would come rolling in…

One way to take a big step toward this just happens to be very simple; increase the inset (padding) of the document windows so the writing area floats in white space. This would substantially reduce the visual clutter around the writing area and provide some visual relief so a writer could more easily focus on their words. That way, a person could have a cleaner writing area and maintain the ability to easily lookup and reference research material as well.

I’m attaching a screenshot from Scrivener to illustrate what I mean. Notice that the “document” is surrounded by about 2" of white space on all sides. If DevonThink had this ability I’d be thrilled. I’d like to know what your thoughts are. Thanks. 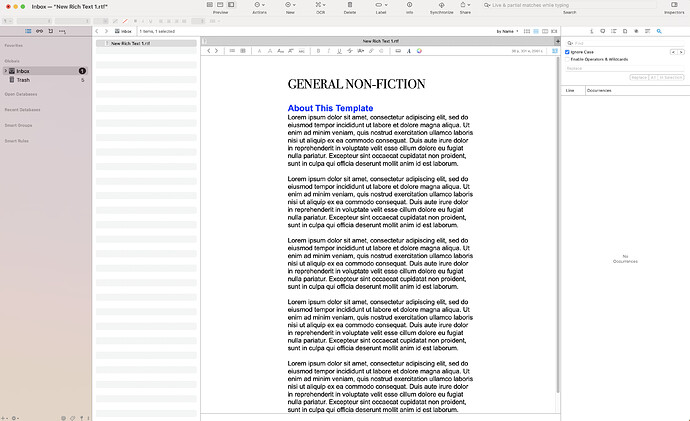 Ha! You used the ruler didn’t you? That doesn’t count!

Darn, I didn’t think of using the ruler. I did it manually for one paragraph, and then just copied and pasted. But you’re right, it does look a lot better. If DT gave us the ability to set left and right margins in a rich text doc, we could have this.

Sorry, I assumed you used the ruler… but your example is just what I’m talking about. The top margin is important as well; the title shouldn’t bump into the top of the window. I hope the developer takes this request seriously and provides some visual relief to the workspace.

Could you use the ruler then export as as a template?

Grantst, the ruler could be used but there are a few problems:

Agree with all you said, as you say a work around. Scrivener does do this well, and agree the ruler is really difficult to use.

Think DT3 won’t focus too much energy to vastly improve writing environment. I would still like them to at least put in some basic formatting for markdown; PITA trying to write even small markdown notes. For serious writing, I’ll use iA Writer to do so. As to your point, have you tried to open with 3rd party app via setting?

put in some basic formatting for markdown;

What exactly is “basic formatting”?
Also, I’d rather advocate “one tool, one purpose”. As it is, DT already contains tons of functions, most users probably only use a fraction of. Making it a fully fledged writing environment would make it even more complicated. It’s perfectly possible to open documents stored in DT in the appropriate program.
As a side note: MD is, like HTML, about structure, not representation. A 2inch margin is representation and can be defined in the CSS that’s used to render the MD. As can be the font style and size, colors etc.

Your points are spot on. I for one probably could not afford (or want) a do-it-all tool like being advocated, especially if there was a call to do markdown formatting [sic]! And would probably bankrupt DEVONtechnologies to compete against Office 365!

Such as bullet points / block code / etc indentation. Basic markdown support would make markdown notes more pleasant to create. Not after all in one as stated in my reply as don’t think it’s worth DT to invest their time on full text editor. Rather them spend time in features thus using iA Writer for in depth writing.

If you mean “intendation for unordered lists and code blocks”, this can be (as I said before, btw) with CSS. Which is, also btw, generally the tool to determine the characteristics of rendering MD. As you can see in my screenshot, the unordered list is indented. 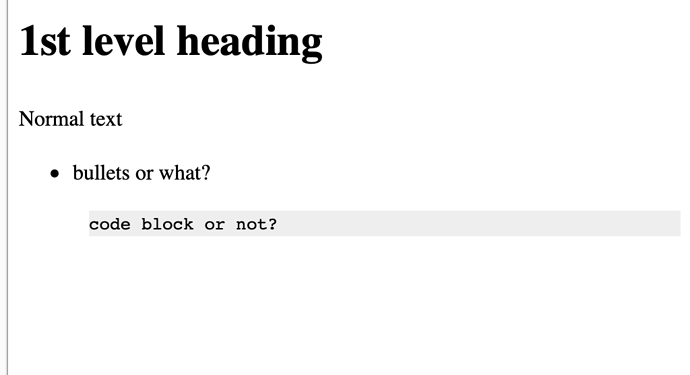 So apparently, DT already does support “basic formatting”. Albeit maybe not exactly in the way you envisage. But: using CSS is a lot more portable since you can (or should be able to) tell any other MD editor to use the same CSS as DT. And since CSS supports all attributes, it is a lot more flexibel for rendering than simply supporting “margins for lists and code blocks”.

I know what CSS is

When writing, it’ll be good to have list/blocks etc auto indented/another bullet created when next line is created instead of having to use - or TAB for each line.

For details of how to do it properly, please see BlueFrog’s post lower down this thread and @pete31’s thread here How to use RTF lists and styles shortcut

The short answer is: the list icon in the Editing bar isn’t enough: you need to have the Formatting Bar visible where the same icon will bring up a list of default list elements (and allow shortcuts).

Apologies for the confusion.

DT’s power in in organization, cross-referencing, cataloging, etc. IMO it is better to leave long-form writing to tools that specialize in that, like Scrivener, Multimarkdown Composer, Byword, Typora, etc. (It is helpful to allow short form text and notes to be created directly in DT.) Rendering can be left to the external editors, or a specialized rendering engine like Marked 2 (or maybe even Pandoc, though that’s getting a bit geeky.)

This kind of usage does mean paying attention in DT to the ability to round-trip or import / export content. Adding features to allow use of an external editor and an external previewer for Markdown text would be nice additions to a future version.

I’ve been using DEVONthink all day for close to 15 years. (Yes, that qualifies my opinion as irrelevant.) I’ve never had issues working across various writing apps and DEVONthink. I’ve also never wanted the company to invest in replicating editor features available in other apps. DEVONthink is useful because it works well with other apps, not because it tries to reproduce what other apps do (and often do better).

DEVONthink is useful because it works well with other apps

I write long-form Markdown in DEVONthink all the time and it’s rendering via MultiMsrkdown v6 works very nicely.

The power of a tool is often in the hands of the craftsman. Just look at Ansel Adams lugging 8x10 plates and simple large format cameras through the Sierras and see the unequaled results he produced

Hey everyone, thanks all for your comments. I think this thread got a bit off topic as I was only suggesting some moderate refinements to DT and not the addition of a full-featured word processing engine.

That said, one point made about how DT handles bullets and lists reminds me of another cause of angst I have when writing. Why not have bullets work fluidly like the way Notes.app implements them? Type a dash and the next line is also dashed until the user hits enter twice — such an elegant way to create lists with virtually no friction for the writer!

A few minor tweaks to the UI (such as padding around the documents), improved bullets and a few others are all that’s needed. I never suggested DT should compete with Word, Pages or Scrivener, yet I DO want DT to be a more inviting and attractive as a place to write drafts.

The power of a tool is often in the hands of the craftsman. Just look at Ansel Adams lugging 8x10 plates and simple large format cameras through the Sierras and see the unequalied results he produced

This is something I give a lot of thought to in the context of all tools and technology. Does an improvement in tools lead to a better outcome? Do I take better pictures with my high-tech Canon camera than Ansel Adams took with his plates? No, of course not! Having a nice writing environment won’t make me into a J.R.R. Tolkien either but since I do use a computer and it’s capable of being customized into many different types of tools it would be nice to have those tools look nice and be inspiring.