Should the devs find time weighing on their hands, I’d like to be able organise notes in a kanban view. I’m a visual thinker, and the kanban is a great way of sorting things into visual piles. I think it would be a very useful addition to DTs various views, and it would make me very happy …

Can you add details on a “Kanban view”
I’ve had success with exporting my task list (filtered list of task notes)
to a spreadsheet; example gantt calendar view
or formatted note; example project table-of-contents

As a “for instance”, I currently use Workflowy’s kanban view as a dashboard for my various projects as a writer & photographer. In many cases, a card contains links to a reference folder in Devonthink, as per below (apologies for the messy redactions): 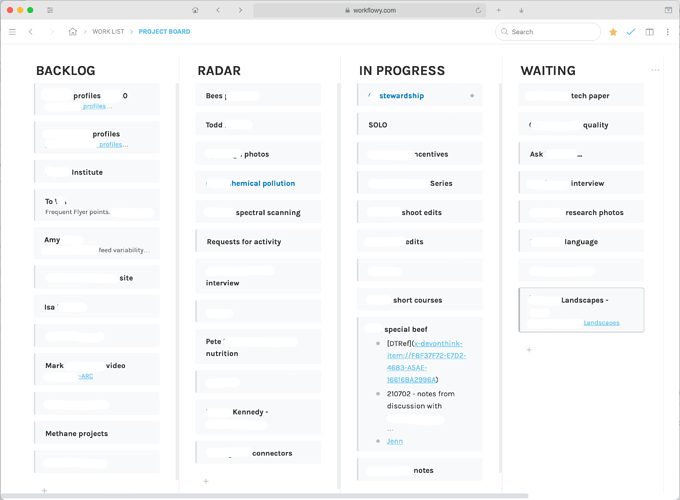 It would handy if this could be built inside DT, so that cards automatically referenced files and folders inside the app.

A second example: I’m working on a 12-month writing project that requires me to write four stories a month for a magazine. Again, it would be handy to have my workflow for this kanbanned in DT, to take advantage of internal linking and other DT tools, but also references - so for a particular topic I could move cards across columns, like: Ideas-More Research-InterviewsOutstanding-InterviewTranscripts-Scratchings.

Of course, all this is possible with folders, but I prefer the visual sense of flow that a kanban provides. I’m very fond of Workflowy, but if I could do everything from DT that would be even better.

As a “for instance”, I currently use Workflowy’s kanban view as a dashboard for my various projects as a writer & photographer.

Please pardon my ignorance but what is this screenshot supposed to show? I mean what kind of information based on which criteria? To me it looks kind of unorganized/random

obviously cannot commment on @amcawood 's screenshot, but I very much second the request for a kanban view. I would like to make the selection criterium for a column a tag and ideally automatically change the tag of the item when dragging / dropping an item from one column to another…oh my god, that would be such a nice addition!..

There’s a description of kanban cards here (in various languages):

What Is a Kanban Card? All You Need to Know | Kanbanize

A Kanban card is a visual representation of a work item on a Kanban board. Find out what a Kanban card should contain, see examples and templates.

(the first example is not the most interesting, though

thanks, there are a number of workarounds with a variety of apps (e.g. obsidian has a kanban plugin) - DT item links are really flexible…I just love to do most of my task / document reviewing / note taking / zettelkasten work within a single app and DT is by far the most perfect solution I have come across…adding kanban to the mix would be yet another step towards perfection (for me…;-)…)

I have experimented a little bit with work spaces to achieve something kanban like, which works nicely for just viewing, however drag and drop between windows and automated tag changing clearly does not work…

As is explained in the hyperlink shared by @chrillek you might go back to the roots of why kanban were introduced and what their purpose is.

It’s about the concept, not the way it looks like.

Agreed - I suspect custom metadata with several Boolean fields, along with some Smart Rules and Smart Groups, could achieve that. I doubt even scripting would be needed.

not sure we are talking about the same thing here. one is digital processes which DT is just absolutely amazing with (not least because of smart rules/groups & scripts). very much list centric, but nevertheless mindblowing…

my requirement (not sure about the OP) would be a somewhat more graphical representation of the same data aiding the process execution. as kanban essentially is very much item based as well it might lend itself to an implementation on top of DT. not as a UI changeover as @Solar-Glare mentioned, but as another, additional and configurable view…

I think the point @Solar-Glare was making is whether you truly “require” a graphical representation of the data vs whether you simply want to track tasks or items through various stages of a process.

If you truly require a graphical representation, then I think you would be best using software where that is the primary mission and using x-devonthink links back to the items in DT3. Let each software package do what it does best.

But if you decide that what you really need is to track items through various stages, then you can indeed do that quite well with custom metadata, smart rules, and smart groups - all in DT3.

A Kanban board could be created if one had a corkboard for notes, ie. View/preview of several notes in a tile format. A corkboard view of notes would make many note takers, PKM folks happy as well

which works nicely for just viewing, however drag and drop between windows and automated tag changing clearly does not work

“works nicely for just viewing” is fine for me, when using work-arounds
I include a link back to the note, and manually update whatever (note label in my use)

I don’t like talking about somebody else’s product, but you’re right. Curio might be an answer to a kanban mode for Devonthink.

There are nuances in how it’s done.

In this screenshot, four documents were dragged in from DT with various display and linkage options. The Library appears in a kanban stack and as editable text, for example, but is not linked to DT. The two kanban entries with hooked arrows are references to DT documents.

Curio is a notebook, it’s not a data warehouse like DT. You can put lots of stuff in a Curio project, but it’s got limitations. For instance, I think files you drag in are rendered in XML. Not my cup of tea for a large archive, or one that may grow large.

Also, if you’re thinking of using this idea to develop the Great American Novel, please don’t, at least not for about a year. I’m planning on knocking out a few best-sellers and would prefer keeping the DT/Curio combination in confidence. It’s my secret weapon and I’d hate to see it leak out on to the Internet.

I appreciate your understanding. 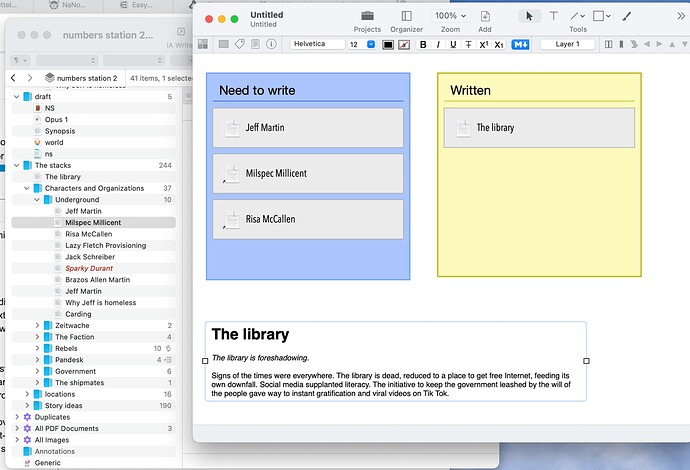 Here’s something I threw together in 5 minutes (it took longer to write this post…) Disclaimer: I don’t use Kanban but thought I’d take a stab, so there may be nuances that I have missed:

Now in use, just drag the items between the boards to change their “state”.

The plus? You can use the power of DT3 - link to other documents/groups. Add metadata etc. If you want to look at a particular item in detail, open it in a new window (e.g.by double-clicking on it if you haven’t changed the settings).

excellent, thank you…I had used tags for the panels, which does not allow for automatic re-assignment when dragging and dropping. using groups is the answer to that…very nice!

I found a weakness in the idea of dragging files from Devonthink to Curio as file-backed text.

The Devonthink database needs to be in a similar path on all machines if you sync across machines.

By “similar paths”, my user name is different on my laptop and my iMac. That doesn’t seem to be any problem. Curio finds Devonthink, presumably from the identical relative path off my home directory.

If the paths aren’t similar, Curio will report a broken link. You can fix it but you’ll have the same problem when you sync back to the first machine.

The portability of a Curio project joined at the hip to a Devonthink database is fragile in that respect. It works for me because I’ll remember the need for similar paths to Devonthink.

Mostly, I’ll probably just duck my head and refrain from further comment about the idea.

It’s powerful. It works for me. Beware mileage that varies.

cgrunenburg: It’s just another way of looking at information. Here’s that same info converted to bullets in Workflowy (some of the top-level bullets have been collapsed for clarity): 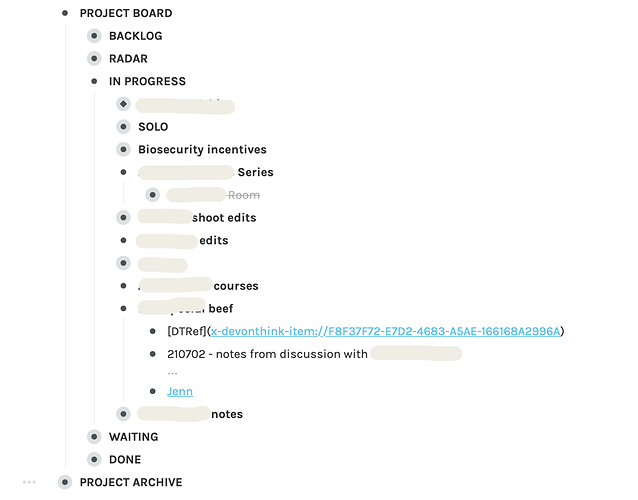 The bullets could be folders, or tags.

This is my project/job list, so there’s a certain randomness to the cards - they might represent a project, or a note-to-self. There’s nothing random about the top line, though - that’s the process flow I’m using the kanban to move the cards through, left-to-right.

Traditionally, kanban is used to represent process, and cards move from left-to-right across the board as you work through your process. It is most often used as a job dashboard, which is what I’m doing here.

Several well-made apps have kanban views available: Notion, Obsidian, Curio and of course Workflowy. Having access to a kanban view isn’t my issue. I was expressing the opinion that it would be a useful option to have in DT, because certain people are inclined to think more visually about information, and certain information-management processes lend themselves to kanban. All my references sit in DT, so rather than cut and paste DT links into another app, it would be convenient to have a kanban option in DT itself. And would be interesting to see how some of the other data management tools in DT would support kanbanning.

Side note: DT is great at managing data, but less excellent at providing ways to visualise information in new ways. Kanban (or even better, a kanban that could also be a freeform cork board, as Wolkenhauer suggests) would be a useful concession to the visual workers among us.

To the argument that I could do the same thing other ways: of course I can. But you could say that about having any of the view options in DT. We have different views of the same data so we can consider it in different ways, according to our inclination and needs. Kanban is just an addition to the various view options. Judging by its popularity in other apps, I think it would get plenty of love. I’d love it, anyway …

Later: Amontillado’s mention of drag and drop in Curio presents another possibility. The main friction in using another app for kanban is copying-pasting DT item links. But if it was possible to use a hotkey + drag combination to drag a DT item to another app, and automatically create a DT link to that item (no need to replicate any of the item’s other data), most of the friction would be gone. (Perhaps two options: make a DT link, and make a Markdown-formatted DT link.)

I still think DT would be well served by a kanban view, but if the devs can’t see value in it, then this option would provide value for everyone working with DT data in other apps.

I was an early adopter of Curio, but didn’t find it to my taste. And I know that drag-and-drop works in Tinderbox, which I think is a wonderful app, but I don’t use it regularly enough to master.