DEVONthink Pro Office crashed on me yesterday. When I started investigating I discovered that Restore Backup does not list the previous days backup. When I inspect the master Database package it is listed there along with the other daily backups. How do I restore this backup if it is not presented under Tools/Restore Backup?

Hoping to salvage a couple days work. All files appear to be orphaned (451) that I worked on/imported/organized over the previous couple days. I would like to see what happens if I restore 09-01-18 backup as the problem occurred early on 09-02-18. 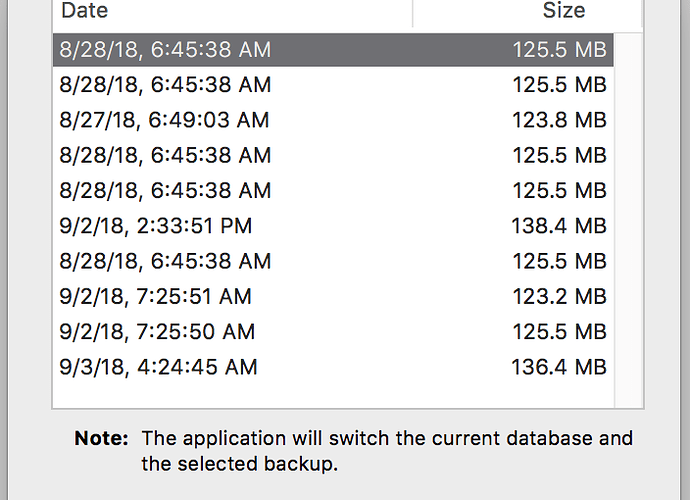 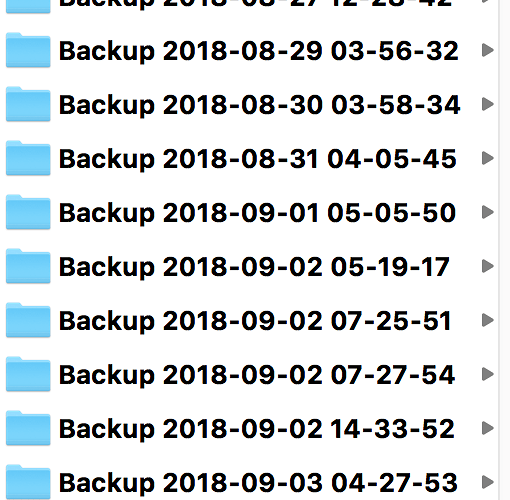 Do you understand the Restore Backup function is not a file restoration? It merely switches out metadata internally.

Also, do you mean to have so many internal backups?
And are you manually initiating Tools > Backup & Optimize?

Do you understand the Restore Backup function is not a file restoration? It merely switches out metadata internally.

Also, do you mean to have so many internal backups?

Yes, if for some reason I do not use the program for a couple weeks I may have a chance to recover if something were to happen.

And are you manually initiating Tools > Backup & Optimize?

I did on Sunday as I was trying to force the program to show me Saturdays backup.

Thanks, I will give it a try in the morning after a complete backup

I have questions about restoring from backup and found this related post from a couple of years ago. I use TimeMachine as primary, but also iDrive for remote. I try to imagine 2 failure scenarios. First, something happens to my Mac and I have to restore from TimeMachine; or secondly both my Mac and External drive are gone/toast.

In the first case, I would have my external drive with access to TimeMachine. I tried to simulate that process. I closed my database, quit DT and entered TimeMachine at a few weeks back. TimeMachine presented me with the .dtBase2 folder but not access the specific backup files within the folder contents. Right Click presented the option to restore the folder, Open or Copy the .dtBase2 file. I chose to Open the file. And when I exited TimeMachine, And when I did I saw that DT was running with my database open and a quick check showed files current as of the date I’d chosen in TimeMachine Database properties showed the source to be the data on my External drive. Several of the File options were grayed out. I noticed that Export Archive was an option, which I presume I would do if this were a real restore. Or perhaps I could have used Copy, Cancel TimeMachine and Paste .dtBase2 file in my Database directory. I don’t know whether Archiving or Copy/Paste would be better - any comments?

In the second case I would need to restore from iDrive. Unlike Time Machine, iDrive shows the metadata folder contents of the .dtBase2 file. I notice that iDrive does not show the Backup folders within the .dtBase2 folder, yet they show as selected within iDrive. When I click on the Backup Date, all the metadata files are included as default. Would I also need to include the Files.noindex folder? 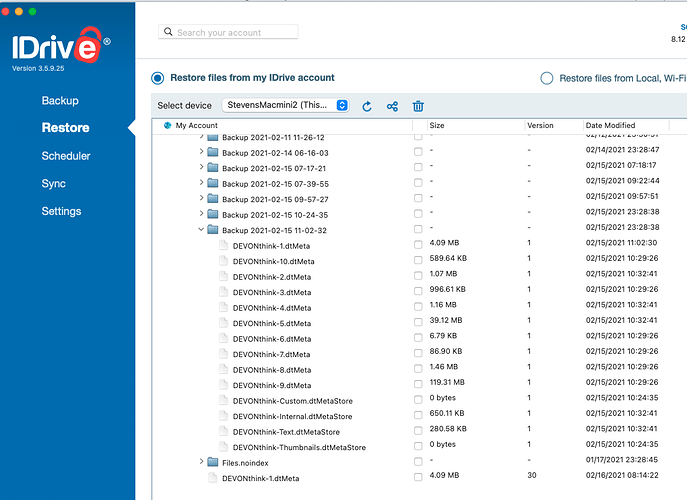 TimeMachine presented me with the .dtBase2 folder but not access the specific backup files within the folder contents

I noticed that Export Archive was an option, which I presume I would do if this were a real restore.

Exporting a dataase archive just creates an optimized ZIP file of the database in its current state.

No, I wouldn’t suggest a copy/paste, especially with a database of any real size.

We don’t use iDrive but this backup looks incorrect. The package isn’t intact. You should have a.dtBase folder containing these items or better yet, just the dtBase2 package intact.

And this .dtMeta file at the bottom is copied outside the structure… 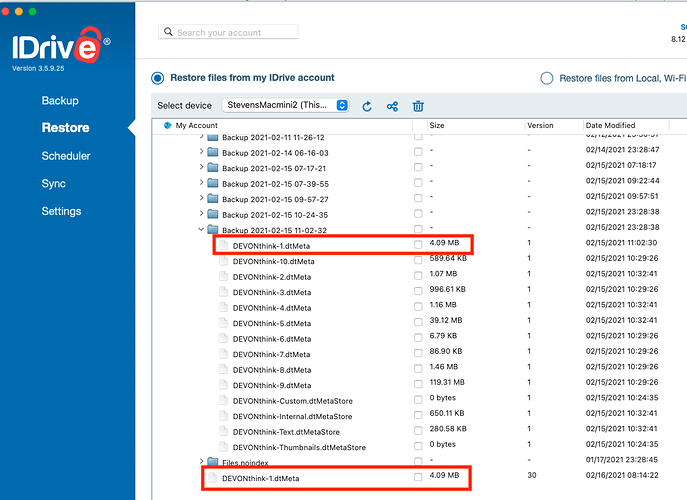 So no, this definitely does not look correct.

Thanks for reviewing my request and sharing your wisdom. I’ll try to better explain.

You asked for screencap. Screen Shot for Right Click Options for files within Time Machine follow. Note that these are the files in my Database folder, not the package contents of the DT3 app During DT 3 install, I went with the default for where my data files were to be stored, the User>Databases folder which I think was created with first installed DT Pro back in 2018 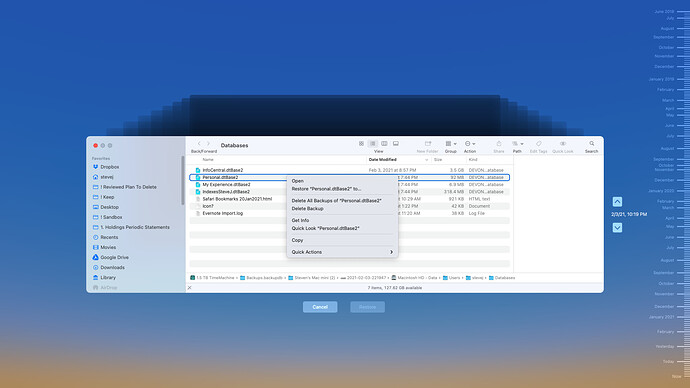 I’ve never been through a recovery on Mac OSx. Just trying to anticipate so your experience is valuable to me. Are you suggesting I should be backing up the Devon Think Application as well - or perhaps instead of the .dtBAse2 packages? ( DevonThink 3.app (package contents screen shot follows)? 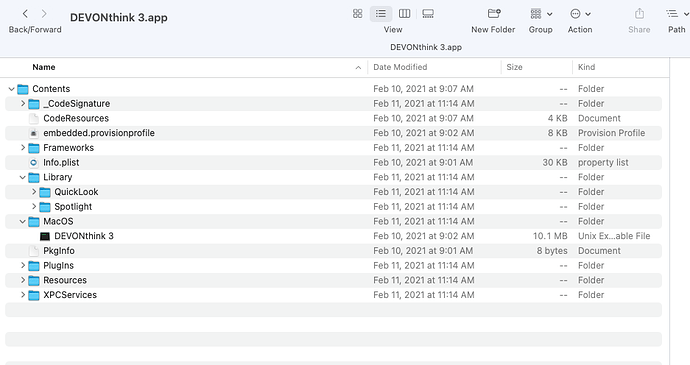 Perhaps my Backup strategy is flawed. During my prior experiences (in the MS DOS & Windows World) for hard drive failure, you always hoped the Backup file would do the job, But generally ended up doing an application re-install and then once it was working open the data files stored on external or network drives.

So, for recovery from MacMini failure, I was only concerned with being able to recover my data after DT was re-installed. And similarly for my remote backup plan, I was only trying to backup the database files (all files within the Database Folder). And so I instructed iDrive to do daily backups, but only the Database folder and all files, including within it. 2 Screen shots from within iDrive follow indicating the Files within the Database folder and those within one of the backup file folders. 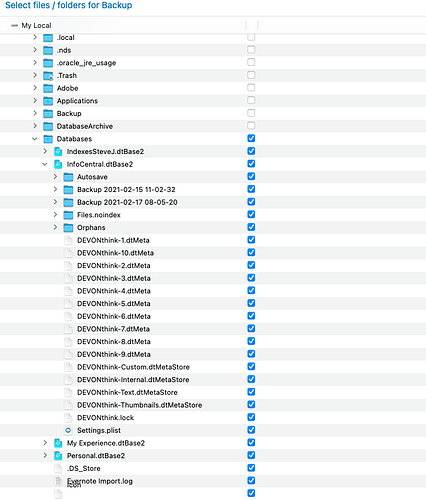 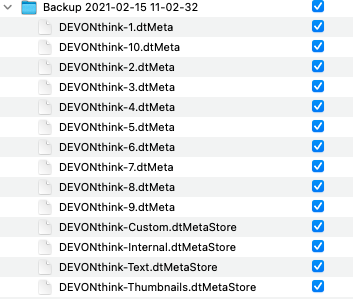 I considered using the DT options for creating a backup file and then using iDrive to backup that folder (Export Archive or Script Export Daily Backup Archive) but didn’t know how to automate them for daily runs so I opted for just selecting the whole Database folder and telling iDrive to backup daily.

When you select the .dtBase2 file in Time Machine, click backwards in time a bit. The Restore button should become enabled.

Okay that looks a bit better in iDrive, though I don’t know if iDrive is package-aware. It may be worth it to restore a database and open it to see if it’s intact. Doing a File > Verify & Repair on it after restoring would be a good idea too.

You can use File > Database Archive or Script menu > Export > Daily Backup Archive if you want to created a ZIP for backups instead. Note: The larger the database, the longer the compression takes when generating the ZIP file.

FYI, the Restore option is there, it’s "Restore _______ to … ". I’d used the “Open” option and it seemed to work just fine, putting evertyhing in place as of the date I’d selected in Time Machine. Perhaps restore would be proper if DT were not an available app.

Any suggestions for a script or other method for automatically creating the Archives?