Items are visible in the trash folder but they are all struck through. How do I restore them?

Just move them to the desired location again. Or if you just moved them to the trash, use the Edit > Undo.

By the desired location do you mean the DEVONthink database and if so how do I do that or do you mean move them individually?

There’s no automatic restore (except undoing), therefore move them e.g. via drag & drop to a group or database.

I believe I successfully got them back where they belong. Might this have started when I did a verify and deleted the 11 items that weren’t found? Also I have a ticket open # 757934

What exactly? That items are in the trash?

I thought that what showed up after verification indicating that there were 11 missing files were in fact those files So to prevent this message from appearing in the future I went down the list and deleted them. Perhaps I deleted the entire database in the process?

Were there more than the 11 deleted items in the trash?

I think you would help yourself if you explained in more detail. This thread began with you asking how to restore items from trash, and continues with you supposing you might have deleted an entire database. I’m failing to set the scene here, so I’m not sure how to help you.

It was everything in the database. However I was able to drag them out of the trash and back into the database. So everything appears to be OK for now. I was attempting to do some forensics to see how I might’ve caused this and my reply to Bluefrog was lost in cyberspace. The 11 items referred to the ones that were missing after I did a verification. I attempted to delete those one by one and perhaps that was when I deleted the entire database.

The 11 items referred to the ones that were missing after I did a verification.

The easiest & safest option to delete missing items is to select them in the Log panel/popover and to trash them via the contextual menu.

Here they are. Is the last one the entire database? 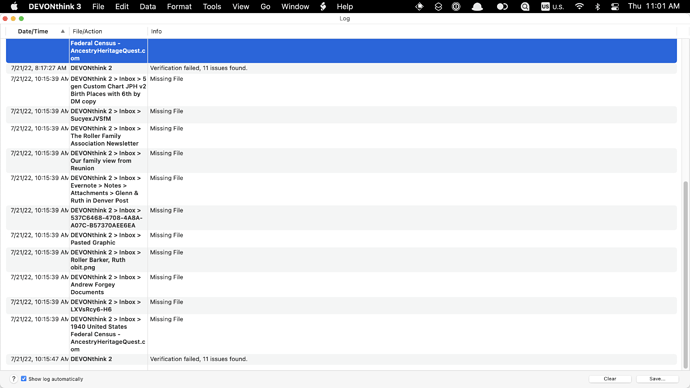 The log popped up automatically and that is where I saw the items the last of which was called (under file/action) Devonthink 2.

Is the last one the entire database?

No, that’s just a summary of the verification. Only the files logged as missing can be moved to the trash via the contextual menu.

I have your ticket in Support and just responded to it.

Thanks. I think I’m good for now.