Some days ago - precisely on Oct 21st - rss feeds became visually unreadable (or unrendered in a pretty ugly way). So the screenshot shows the feed item as if the format is not recognized:

I didn´t have changed any settings I´m aware of. No updates made to the software (DT3 pro)

Any ideas where to look?

Are previous articles still readable or is this affecting new and old articles?

No, only new articles are affected.

I would suspect the publisher of the feed made a change. What’s the feed URL?

That change was my first thought too. But now - sitting on another mac - everything is fine. So I now suspect definitely a configuration fault on my side. I investigate further and report back. (BTW: the RSS feed URL for the screenshot feed is https://www.datenschutz-guru.de/feed/ )

I tested on a second database and reproduce my feed settings there. The new feeds where imported only a few days back (assuming the feeds have only populate a certain number of items) but far enough to cover the “critical date” 20th Oct.

The new imported feed items where all html, not markdown, and without any error. Even when set the import feeds from automatic to markdown nothing breaks. Only the links in the feed items where missing in markdown, but I think this could be intentional (isn’t it?).

My workaround at the moment is to archive the old and good looking feed items as webarchive to an archive folder and set up the feeds anew.

A screenshot of Preferences > Sync and of the Info inspector of the feed might be useful, thanks. 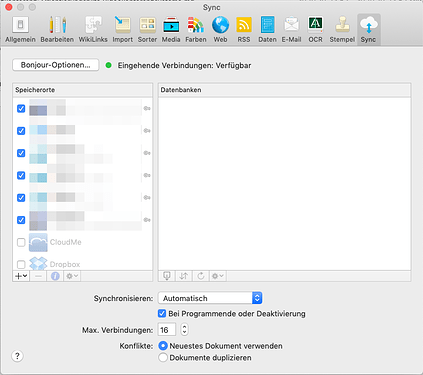 Info inspector of the feed: 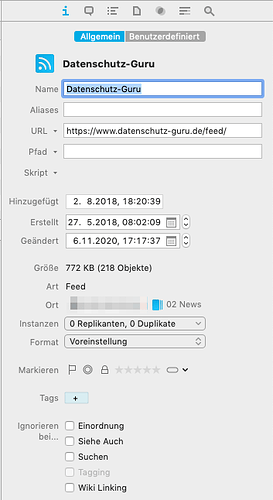 I’m sorry, this should be Preferences > RSS.

Thank you! And the screenshots are from the computer causing the troubles? According to the settings either bookmarks or HTML pages should be added. Are the settings the same ones on the other computer?

Yes, the screenshots are from a computer that causes trouble. But as all 3 of them “replicate” the unreadable state of the feed items it’s all the same as are the settings for all 3.

So do I understand you correctly: I have to set the feed format from automatic to html or bookmark? (As there are no updates every day I can’t test it “on the fly”.)

I have to set the feed format from automatic to html or bookmark?

No. Since you are using the Automatisch and Voreinstellung options, the feed articles should come in as bookmarks or HTML files.

The feed is working as expected in an internal build here: 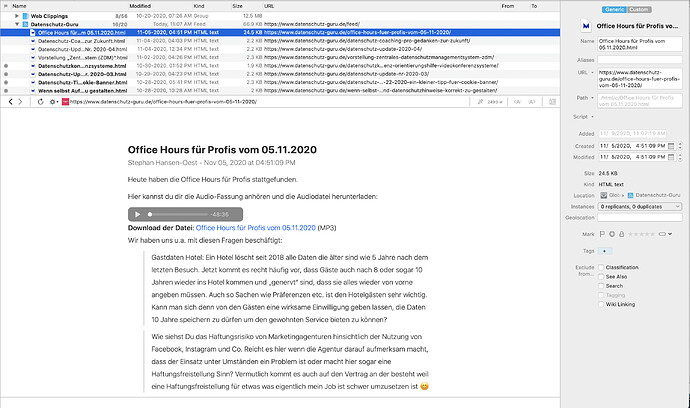 That’s right. In using a new database and re-abo the feed I had the same behaviour. All new articles where fetched as html but not as md any more as I mentioned in my post describing this as a work around. But thanks for testing this out.

Maybe this was a hickup on the side of the feed creation server. The newest feed item was fetched as html again.

Now the curious part: when pressing the reload icon in the “status bar” (? don’t have a better description for the bar on top of the content window) the broken feed items where now displayed as whole web page content with menus and so. But when selecting any other feed item and then point back to the reloaded one it looks the same as on the OP image.

And I’m imagining you’re syncing the machines together.

No, restart DTP3 or reboot do not affect this behaviour.

And yes, I do sync these computers.