You could also use an interval trigger like Every Minute. This should work without problem with items that get moved.

Thank you very much for this Apple script. I have added it as a last step to the rule as described. I don’t understand what the script does, but now the whole process finally works as I had imagined. Unlike the standard process where ScanSnap sends the scan to DevonThink via application interface, this process has 2 advantages:

The process again in brief:

I have tested the process and it works flawlessly. For example, you can scan all incoming mail during the week and throw it away immediately, and then start DevonThink at the weekend where you will find all scans already sorted.

Many thanks and greetings

Below are the final screenshots of the two SmartRules: 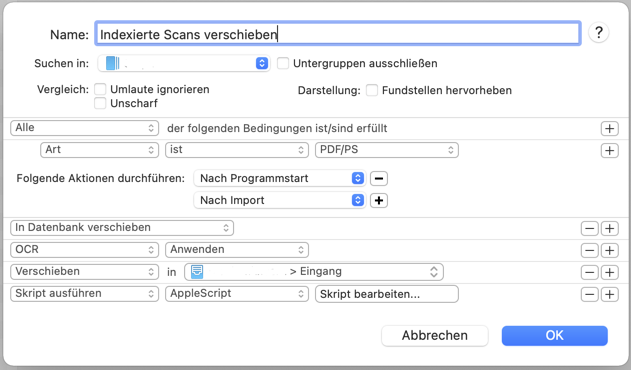 That sounds like a viable workflow for scanning without a Mac running. Glad you have something working

Synology NAS (which is constantly running)

With the NAS constantly available, is the Google Drive necessary
Could scans be directed to a folder on the NAS?

edit; Already answered - I should have done a better job of reading the previous posts

I found out that although the ScanSnap cannot save directly to NAS without running the ScanSnap Home software (and therefore the Mac), but it can save to Google Drive.

As far as I know, ScanSnap does not offer the option to save directly to NAS, hence Google Drive.

I don’t understand what the script does

it says “for each record handed to the script by the smart rule, trigger an import event”, so basically it tells DEVONthink “this file has just been imported”.

it says “for each record handed to the script by the smart rule, trigger an import event”, so basically it tells DEVONthink “this file has just been imported”.

Thanks for the explanation. Do I understand correctly, that with the script, so to speak, the actions of the rule are “neutralized”, that is, the original action (“the import”) becomes the final result, as if the in-between had never existed?

I think you could say it like that, yes