Is it possible to save scans from the ScanSnap ix1600 either to a cloud service or to a NAS, and then have DevonThink import them automatically when the application starts? With the aim of being able to scan even when my Mac is not running?

Yes, assuming, that is, that the scanner is happy to operate stand-alone, i.e. with the Mac off. Simply set DT up to index the appropriate folder and a smart rule to move anything in that indexed group to the global inbox.

As per the link, I set up a folder as my DT import folder; actually an alias to the Global Inbox
I would direct the scans to this folder

New user questions: In or From DT DEVONthink

Maybe off-topic to the original question, but you could also use the Global Inbox in Save Dialogs add-on to get stuff into DEVONthink as a move instead copying: [Global Inbox in save dialogs] I personally only use an alias I created for the global inbox on my desktop to move stuff into DT. The path is below: [Path] Right-click the Inbox and make an alias, which you can then drag to the desktop or anywhere else. I added a nice icon and it looks like this on my desktop: [DT Alias]

Thank you very much for your answer.

I found out that although the ScanSnap cannot save directly to NAS without running the ScanSnap Home software (and therefore the Mac), but it can save to Google Drive. And my Synology NAS can then in turn sync with Google Drive, which ultimately puts the scanned data on the NAS.

As far as I know, DevonThink cannot import directly from GoogleDrive. However, I assume that indexing the NAS folder with DevonThink should not be a problem.

Is setting up the synchronisation per se and the SmartRule to move everything to the Global Inbox a difficult thing?

Is setting up the synchronisation per se and the SmartRule to move everything to the Global Inbox a difficult thing?

It sounds like you have too many stepping stones in your process.

Where can the ScanSnap save to in Google Drive, i.e, what specific location?

It should have written “indexing”, not “synchronization”. Pls apologize the confusion. As per Blanc: “Simply set DT up to index the appropriate folder and a smart rule to move anything in that indexed group to the global inbox.”

The process of routing the scanned document from ScanSnap to DevonThink without the Mac running all the time may sound a little complicated, but in fact I am not aware of a simpler solution. DevonThink, as far as I know, cannot import from a cloud drive (e.g. Google Drive), but it can import from a NAS, and ScanSnap cannot export directly to a NAS, but can export to Google Drive. Hence the bypass with Google Drive. The folder in Google Drive that stores the scans can be freely created and then selected in ScanSnap (whole process works reliably).

Provided the process works as described by Blanc (indexing, importing), the whole process could be used for yet another application, namely to serve multiple users/DT databases. While the regular way (export to DevonThink application in the ScanSnap profile) does not allow any distinction of users, with indexing each database could access a specific storage folder and thus import exactly the corresponding scans. Of course, this would require setting up 2 cloud profiles in ScanSnap with respective specific Google Drives.

I’ve tried to use a smart rule before to accomplish this, but ended up with duplicates of indexed files and the imported version.

Say one starts off with file A, B and C in macOS Finder folder Z:

If a certain smart rule imports A, B and C, you’ll end up with those files in DT group DTY

When searching for files in DT, I always ended up with duplicate results from both DTX and DTY.

That shouldn’t be the case if you use the Move into Database action.

As far as I know, DevonThink cannot import directly from GoogleDrive. However, I assume that indexing the NAS folder with DevonThink should not be a problem.

Why should DEVONthink not be able to index a Google Drive Folder? If it’s integrated in the Finder like an iCloud Drive folder or a Dropbox folder it can be indexed. And then a simple Smart Rule could import the scans into a database.

It would require me to let the Google Drive app run on my Mac, which I do not prefer to do. But if you prefer to do so, that would work.

Thanks for the clarification.
You are correct - you can’t Index an online-only repository.

I have tried to implement the process you described. The indexing works perfectly, but the SmartRule for moving does not yet work. I’ve played around a bit, but I don’t understand what’s wrong yet. Below is the smart rule for moving from the indexed folder to the global inbox:

Look in: “indexed folder”
“All” conditions are met:
Conduct the following actions: “After programme start”
“Move to database”
“Move” to “Global Inbox”

What is not correct?

One additional question which came up: What is the proper location for the indexed folder? The application creates it within the inbox, but I noticed that it does not update properly, after moving it to the database it worked fine. Should it be within the database?

As noted in the documentation, an indexed gorup may not update automatically when indexing a cloud-synced location.

There is no proper location for an indexed folder, except one that makes sense in your situation.
As a general rule, the Global Inbox is a good place as it’s made for not-yet-filed or transient data.

Can you post a screen capture of your smart rule?

Thank you very much for your answer. To answer in order:

I have now been able to get the whole process to work by changing the condition of the rule to “Marked” as “Unread”. Below is the SmartRule as it is at the moment:

Now I assume that there might still be potential for optimisation. For my understanding I still have 3 questions:

Thanks again for all your answers.

Thank you very much for the clarifications. Everything works.

I made another change in the SmartRule because I also want to run OCR through DevonThink (and not through the ScanSnap). The SmartRule now looks like this (and works): 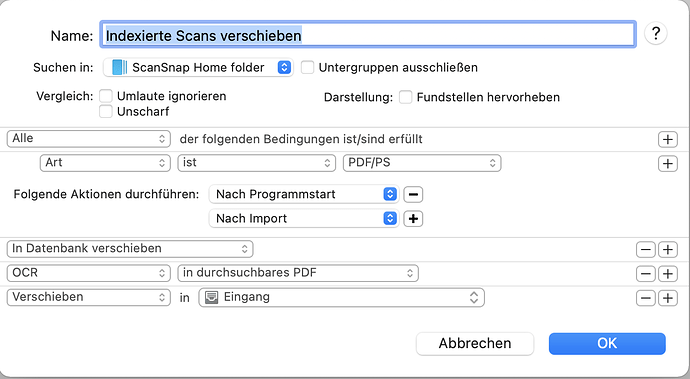 However, what no longer works after implementing this additional OCR step:
After the document had been moved to the Global Inbox, the keyword-based sorting into subfolders was previously triggered. Now I have to trigger this smart rule manually. I have unsuccessfully tried various triggers such as “After import”, “On new messages”, “After creation”, “After move”. The rule currently looks like this:

Do you have any ideas what the problem could be?

If you can wait until I’ve finished a bowl of noodles, I’ll post the answer for you

Now then…: basically, the trigger has already been used up for the record by the first rule. The simplest solution to the problem is to add the following script as the last step of your first rule:

With that, the on import trigger will fire for each of the records handled by the first rule.