I should add, in the original email the Jpeg was actually a link to a Jpeg on the internet somewhere, not I believe an actual email attachment. That’s another reason I had to jump through some hoops to get it saved in devonthink as a separate item.

Clicking the link in the email is not going to open a local file. The link is part of the content of the email, not something editable.
The simplest way would be to put the email and attachment in the same group in the database.

This can also be accomplished by using the script Add messages & attachments to DEVONthink from the global script menu in Apple Mail. 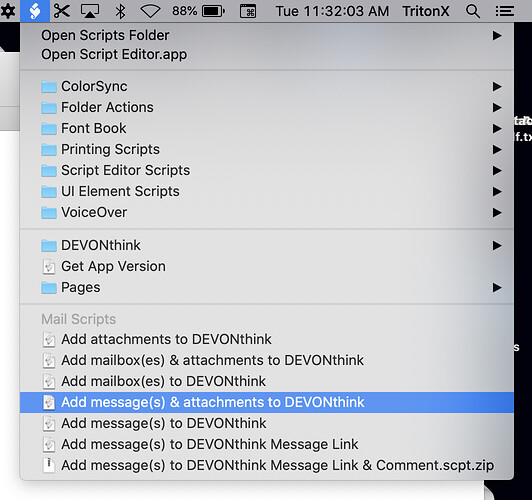 Oh cool I will explore that script, I haven’t tried that before. Thank you for the reply.

btw, what is the difference between that applescript “add message(s) & attachments to DEVONthink” and the “Add to DEVONthink 3” menu item in mail.app (when the devonthink mail plugin is setup)? same code behind the scenes, just invoked two different ways?
thanks

Add to DEVONthink 3 doesn’t use AppleScript and is therefore especially faster but doesn’t store attachments as separate files contrary to the script. And of course the major advantage of scripts is that they can be easily modified to the user’s needs.

The plugin stores the attachments in the same item as the message. I see.

A similar issue I’m having is links in the message. Many emails I’m getting these days have a portion or most of the message as a link to something on the web. When rendered in the email user agent (after enabling links) the message looks fine but when shown without rendering the links, half or more of the message is missing. How can I pull the data at the other end of the link once and save it so devonthink can render it when I view the item? I have some messages where it won’t render the contents of the link at all in devonthink. Of course it would be better if the email sender included all that data in the message directly but unfortunately we know they love their tracking.

How can I pull the data at the other end of the link once and save it so devonthink can render it when I view the item?

DEVONthink doesn’t support this, emails (and all other file types) are imported/archived without any modification.