SCAN AND INDEX vs. IMPORT

I’m wondering if the “Scan & Image” functionality is available in the same manner, in case one chooses to index files from the FINDER, instead of importing them into the database. I gathered 3 Question relative to the possible resulting scenari in the following Screenshot:

Any hints would be much appreciated 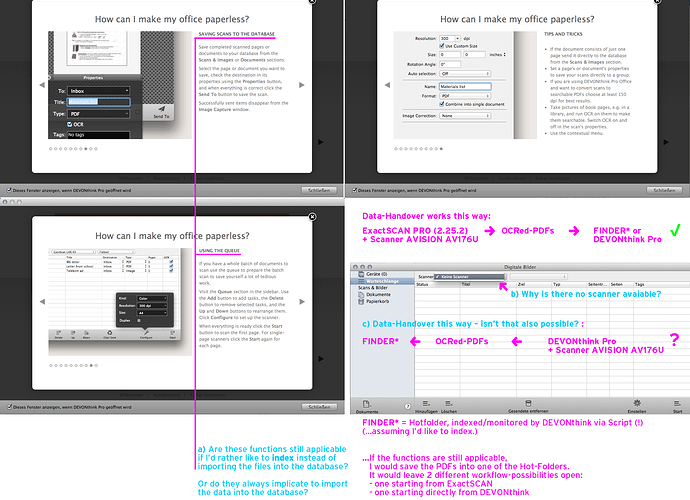 Scans are currently always imported. One workaround is to scan to an indexed group and to use the contextual/action menu command “Move to external folder” afterwards. This command converts the imported scans to indexed ones.

do you think of a probable reason why the AVISION Scanner does not appear there? (It’s a DEVONthink_Pro-Version – that should work, doesn’t it?)
(-> screenshot)

AVISION answers “No” to the OSX-Image-Capture-Framework-compatibility. The AV176U (Sheet-fed scanner) is dedicated to work (and works) with “ExactSCAN Pro”.

Another scanner (Canon CanoScan 5600F) is available, but this one has no automatic feeder – it’s the reason why I concentrate on the AVISION AV176U, which btw is recommended by ExactCODE (ExactSCAN Pro).

Now, it’s quite hard to automate the whole process, as soon as you want to keep the documents traced/indexed and not imported. As far as I understood, the process could look like this:

That way, DEVONthink administrates the links (paths) to these Hot-Folders.

Be cautious in this line of thinking or you will conclude things that may not be accurate.
DEVONthink doesn’t modify the filesystem (unless an explicit deconsolidate via script / Move to external folder is called). It isn’t even “watching” the filesystem actively. It updates upon selection and is recording absolute paths. Remember, this is a database, not a file manager like Finder is.

Thanks, Christian and Bluefrog for the return of info !

The line “DEVONthink doesn’t modify the filesystem (unless an explicit deconsolidate via script / Move to external folder is called” is deconsolidating me somehow…:

I put a test-file in one of my Hot-Folders (via FINDER), then I went on for the next step in DEVONthink: actualizing/updating the indexed folders with “alt Cmd S” (DEVONthink/Menu/File/Update indexed items). The promt sometimes is avaiable, sometimes not – I didn’t find out why, yet. But I managed to make it work – meaning:

So, did I correctly understand your answer, pointing out, that updates would happen…

Is that what it means?

Your last conclusion isn’t correct. DEVONthink doesn’t monitor the state of folders and files in the Finder.

You can attach the Synchronize script to an Indexed group. But if new content is added to the external folder corresponding to the group, the database won’t be aware of the change. The script will become effective only when the Indexed group is opened, which triggers the script to update.

Thank you, Bill, for sharing this!

Is there any official source for “The Synchronize.scpt” ?
Is there any hidden section of the website here dedicated to DEVONthink-scripts ?

I’ve been browsing around but couldn’t find any reference here, nor in the program-documentation… there is just a few sources online offering the script, but who knows if they are safe…

You can attach the Synchronize script to an Indexed group.

Thanks, Greg, for catching me on that.

…before an event tells him to do so – and this event is “mouse-release” on the counterpart of the Hot-Folder, in DEVONthink, correct?

Is there any hidden section of the website here dedicated to DEVONthink-scripts ?

If you stick with DEVONthink for any length of time – and are interested in using DEVONthink scripts – I advise keeping a safe copy of any scripts that the company produces because from time to time scripts (like the “Synchronize” script) get deprecated and disappear from the release package. Even deprecated scripts can have value and frequently are still functional or make good starting points for your own scripts.

Thank you Korm, for this input!

I read about the “Synchronize” Script but could not find any official trace of it anywhere on the site. That’s why I came up with the question for a centralized scripts-repository and asked, if there maybe is such an official place for it.

I’ll have a glance at your suggestions – merci!

Here’s the version of the “Synchronize” script that formerly was shipped with DEVONthink, and is now deprecated. (See the conversation up stream of this post.)

It’s not useful for its original purpose, now, but it’s a good template for how to make a so-called “triggered” script – a script that is attached to a group or record by means of Tools > Show Info > Script