If you use iThoughtsX you probably have markdown links to DEVONthink records in your maps. Clicking one opens the record. That’s nice if you want to see the records content or do other stuff with it.

As new iThoughtsX user my first approach to learn how iThoughtsX works was to review a whole database in it (split into parts). But clicking each topics link I wanted to act on soon became annoying as there’s too much overhead:

After unsatisfying success with UI scripting I asked the developer if there’s another way and he told me that itmz are just zip files with XML inside.

I made up this nice script which lets me manipulate DEVONthink records from within iThoughtsX. That means instead of clicking one topic by one to get to the linked record it’s possible to do multiple selection in iThoughtsX, then run the script and it applies code to all records at once. It took at least 4 steps to handle 1 record in iThoughtsX. Using the script with 1 record still takes 2 steps: selecting the topic and running the script. But there’s no need to just select 1 topic, we can select as many as we want.

Don’t get me wrong, this is not about saving some clicks. And it’s not “the script”. It’s just a connector between iThoughtsX topics and DEVONthink records. If you use it you most probably will do something else than I will.

The script only creates the connection from a iThoughtsX topic (which holds a DEVONthink markdown link) to the DEVONthink record - what you do with the record(s) from within iThoughtsX is up to you. Could be simple things like setting a label or sometimes not that simpel things like splitting up a database.

The main advantage of manipulating records from within iThoughtsX is that you first don’t do anything with your records. You’re just using a great mind mapping app which happen to have some links to DEVONthink records. You can do all the normal mind mapping stuff, reorganize topics, group them, create links, take notes (even in topics that hold DEVONthink markdown links). When everything is set up and you want to “write back” the result to DEVONthink then it’s only some line of AppleScript and that’s it. Before running your script it’s a mind map. Afterwards it’s a snapshot of changes you applied to some records, some groups or some databases.

See the screenshot, I created a group listing with markdown links, pasted in iThoughtsX, selected some topics and ran the script with set label of thisRecord to 2. As you can see the label was set for those DEVONthink groups. The most basic example I could think of, but as you know DEVONthink has extensive AppleScript support and everything you have in mind can be planned and rearranged in iThoughtsX. 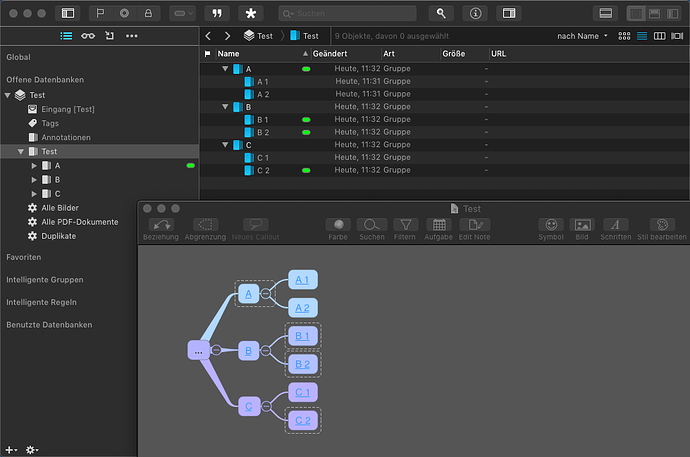 Note that in this early test there was no chance to tell which topics the script ran on once the selection was lost. So changing selected topics text and / or form is a good idea. I use Keyboard Maestro for this but it’s possible with UI scripting too (see example in script).

By the way: the script can be adapted to every app which owns a URL scheme (if this makes sense depends on the apps (Apple)Script support).

If you don’t use markdown yet here’s a script that copies the DEVONthink selection as markdown links.

This is a markdown version of the “Create Listing” script, be aware that it takes the selection of the navigate sidebar.

Ok, the “Manipulate DEVONthink records from within iThoughtsX” script.

Some things to consider:

Having a hard time grasping why this is necessary.

Would you be willing to share a bit about the nature of your content so we have a use case example as to how it can help?

It’s a database of tweet HTMLs, the content is also in the name (except for images and videos).

DEVONthinks list view doesn’t wrap text and in preview every opened tweet HTML resizes several times, so DEVONthink is not the right app. Did it some time in Tinderbox but compared to iThoughtsX it’s also not the right tool.

On the other hand iThoughtsX is swift, wraps text and lets me collect similar content - exactly what I need for this task. With the script I can then replicate, duplicate, move, set labels or custom meta data etc. to mirror what I’ve done in iThoughtsX to DEVONthink. Wouldn’t make much sense to review in an app where data is locked in.

Using the tweet name for reviewing also has the nice side effect of not getting in contact with comments. This was often enough a problem … If I want a comment I capture it separately

That’s due to DEVONthink’s new handling of “invalide arguments”. After the release of DEVONthink 3 I decided to continue to use “search window” in scripts so that DEVONthink 2 users could use them in, well, search windows. With version 3.6 that’s not possible anymore.