i have a record selected in a ‘as three panes’ layout.
how can i actually scroll the content up/down with my lovely keyboard?

that is odd. those two things jump to the end/beginning of my record list…
this happens regardless of the type of the currently selected record (pdf, webarchive, movie)

that is odd. those two things jump to the end/beginning of my record list…

You have to have the focus in the document not the file list. If you’re focused on the document preview and option-arrow isn’t working, just try the up/down arrows.

If you expect to elegantly traverse all elements of the DEVONthink windows with just the keyboard – I’m afraid that’s not going to happen easily. It’s not a keyboard-centric application.

indeed, you are right. its odd cos even devonsphere express can do it

i played around with keyboard maestro and found something that seems to work. we will see how that goes. 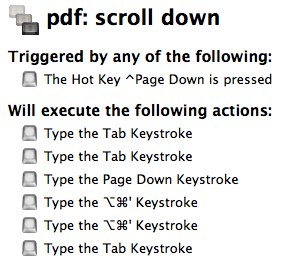 I’m afraid you’ve lost me. That macro does not do scrolling over here. It does nothing.

basically when i am on a record, two tabs gets me down to the preview (3 panel). then i press page down. thats for the scrolling.
but i loose the selection. thats why i press alt+command+’ twice. the first time i get to the "see also’ sidebar. second time i get back to the group list. another tab, and i gete to the record list, automatically selecting and focusing on the previously selected record

edit: seems to be only working with the ‘see also’ sidebar out.

In three-pane view control-tab is the command to move between panels.

It seems the macro is machine-specific – for your setup, perhaps. Thanks for the concept. 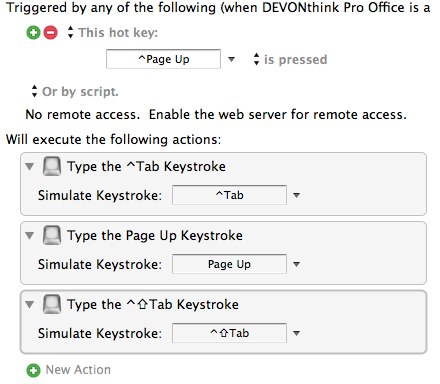 OMG OMG AWESOME. thank you very much. but i guess thats machine specific as well

sweet help page. for a second i thought my work was pointless