Hi everyone. Sorry if this has been asked and answered already (my search revealed no results), but I’m just recently seeing a “Personal” disk image mounted on my desktop whenever I open or have open my “Personal” database in DT: 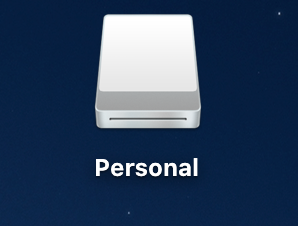 Does anyone know how I might have accidentally enabled this? And is there a way I can revert to not having it visible on the desktop? Not a huge deal, but a minor nuisance. Thanks in advance for your help!

Quit DEVONthink and see if your database is named Personal.sparseimage. If so, change the extension back to .dtSparse.

Which version of macOS do you use? Mounted encrypted databases should be invisible in the Finder.

Now, however, I can’t import data into the database and I’m seeing a crossed-out pencil icon next to it.

What was the initial extension? Did you actually create an ordinary or an encrypted database? What’s located on the Personal volume?

Just out of interest, do you have the option to show hard disks (Found in the Finder menu under Finder/Preferences/General) on the desktop on?

still saw the “Personal” database on my desktop.

Do you mean disk, not database?

I don’t have that option checked, but thanks for asking.

And I believe I remembered – it had .sparseimage as the extension before.

Where is the encrypted database located - the file path on the machine?

If the encrypted database is properly named with a .dtSparse extension you should not see the mounted volume on your desktop or in the Finder’s sidebar.

Quit DEVONthink. The database should close and unmount automatically. Then do a search for kind:database name:personal and make sure you don’t have any duplicate copies, especially ones with a .sparseimage extension.

No duplicates, but they’ve got the .dtBase2 extension. Should I change it to .dtSparse?

I think that worked. I had to close the database as well manually inside DEVONthink, for some reason just quitting DT didn’t do the trick. I have another database I use for work that has the .dtBase2 extension, but is working properly. When I try to change it to .dtSparse as well, it just turns into a folder. Should I just leave that one as .dtBase2?

If the database isn’t encrypted you should leave the extension alone.

They’re both encrypted. (At least, I think they are. How can I confirm that?)

And maybe, would you mind explaining all the extensions and what they mean? I’ve seen .dtSparse, .dtBase2, and .sparseimage. Are there others to be aware of? What do they all mean? What are their differences?

They’re both encrypted. (At least, I think they are. How can I confirm that?)

It wasn’t encrypted if it appeared as a folder after changing the extension to .dtSparse2.

Are there others to be aware of?

Only .dtCloud, which is a sync store used only by our sync engine.