Services menu: is it possible to configure the group in which new notes are created or appended?

I often use the Services Menu → DevonThink take note and append to note.
I would like to store those notes automatically in a subgroup of the inbox. Is it possible ?
thanks in advance for your time and help

Sorry but no it’s not possible to organize the services menu.

Is there anything special about those notes that would allow me to create a smart group ?
thank you

Sheesh! I totally misread your initial question (though my response is still true, just unrelated)

Can you post a screen capture of the service you’re using?

I most commonly use 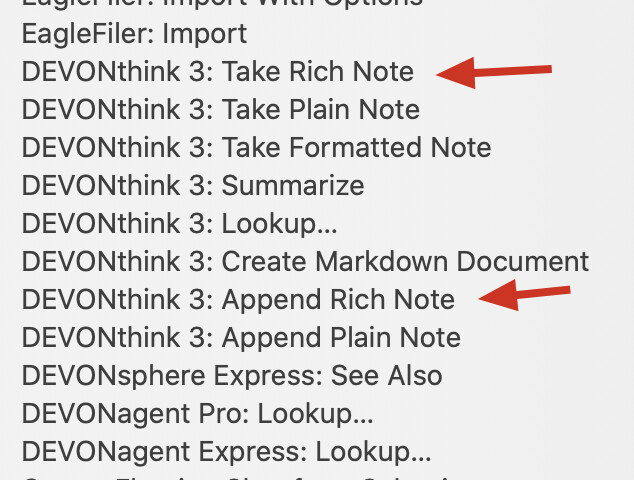 I would like to store those notes automatically in a subgroup of the inbox. Is it possible ?

You could enable the group selector in Preferences > Import.

As @brookter says below, I am constantly finding little gems in DevonThink

I used to use the Rename > Prefix / Suffix / Regex scripts a lot, though one or two of them disappeared a while back. Instead of seeing how they’d been replaced by new features, I’ve just been putting them back on the menu and muttering quietly. Embarrassingly, I’ve only just noticed the Tools > Batch Process command, and it tu…