Shortcuts action to duplicate an item in DTTG

However there are no parameters to select the specific mode - move, replicate, or duplicate - after adding the action to shortcuts.

I can use the action successfully to move items.

I tried moving an item within the same group - thinking that might duplicate - but then I get the following error:

Can anyone tell me what I am missing?

Tap Move in the shortcut action. 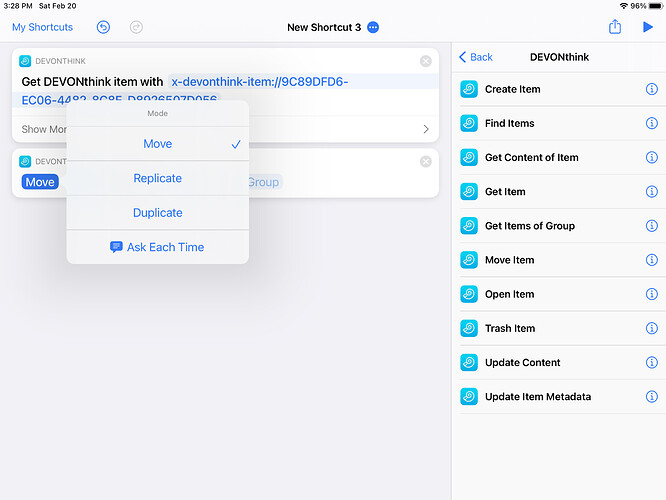 No UUID passed on to Shortcuts? DEVONthink To Go

Thanks for checking @BLUEFROG. Good to know it’s not just me. I think the x-callback is an issue when switching apps (from DTTG to Shortcuts), but apparently @sven.luetkemeier doesn’t.have that problem. I am using an older device and Shortcut might somehow stall when memory runs low or something. I’ve worked around for a second time and used split screen to view the shortcut on one side of my screen. I then select a record in DTTG on the other side of the screen and run the shortcut. With the c…

With a great idea to invoke x-callback by @sven.luetkemeier I managed to setup a shortcut that can alter a record by using split screen. That way, you don’t have to hard code the UUID in your shortcut, which might defeat the purpose of it, depending on your situation of course.

Thanks @Solar-Glare for the pointer, I’ll check it out.

Be aware that invoking the x-callback by starting a shortcut on the share sheet required me to restart the device, as sharing from the share sheet became problematic. Using split screen didn’t though.